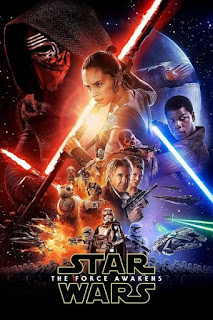 There was a point in the shooting of “The Force Awakens” in which J.J. Abrams gave Daisy Ridley some tough love. This being her first film, she was obviously intimidated by the project. He told her outright that her acting was “wooden.” It’s the sort of tough love that Lucas should have given to Hayden Christensen in his prequel trilogy (along with some better dialogue). It worked on Ridley. She is the driving force of this new “Star Wars” film. As such, she’s essential to making the whole thing work. And she does.

Better yet, she isn’t the whiney teenager that was expected to carry the original and prequel trilogies (Mark Hamill’s Luke, and Hayden Christensen’s Anakin Skywalker respectively). She has just the right amount of Luke Skywalker and Han Solo in her to be one of the strongest characters in the series. In the early portion of the film she portrays the wistful youth staring at up into the sky waiting for her turn to be apart of something bigger. Once the adventure takes her off from her Tatooine-esque home of Jakku we find she has that Han Solo-like innate ability to pilot any ship she gets into as well as repair it when the need arises. Which inevitably leads to one of the best callbacks to the original series.

As the fairly aggressive ad-campaign shows, the Millennium Falcon shows up, but what a pleasant surprise it is when it finally does. That seems to be one of Abrams’ strengths. He is as nostalgic for “Star Wars” as any fan in the world, and he peppers this film with callbacks to the original series. One moment has a character aboard the Falcon bump into a table that turns on the animated chess board where Chewie played a game with C-3PO in “A New Hope.” Fans ooh and aah over these "fan servicey" moments initially because we haven’t seen them on the big screen in a new film since the first “Star Wars” film. Yet I can’t help wondering how they’ll hold up upon multiple viewings.

Nevertheless, these moments are just the tip of the iceberg. Much the way “Creed” successfully rebooted the “Rocky” franchise with a passing of the torch in a film that mirrored the structure and major plot points of the original “Rocky,” “The Force Awakens” borrows heavily from “A New Hope.” They are for all intents and purposes the same film, but with a new cast and a fresh coat of paint. In the same way the strategy worked for “Creed,” it works again here with “The Force Awakens.” The obvious intent is to establish characters, do some world building, and start a new series with more than a few loving winks and nudges at what came before. It succeeds on all fronts. Yet, again like “Creed,” the detractors will point to this mirroring of structure as a lack of creativity and progress. Yet that is, I think, a null argument when you look at just how well acted, well paced, and well crafted this film is. It doesn't go out of its way to make the structure work and all of the callbacks feel natural. Their success is no minor feat.

To write this film off from a conceptual level would also be to forget about the rest of the film and its new characters. It's remarkably satisfying to see these new characters working alongside series favorites. Abrams' script and stylistic flourishes pay homage to Lucas' world while improving upon its foundation. Even putting this film up against "A New Hope" will certainly reveal Abrams' ability to fix some of Lucas' flaws as a filmmaker. John Boyega’s ex-storm trooper Fin, for instance, is not just an excellent character that has no mirror to the original series, he represents a depth to the world that Lucas never bothered to flesh out. Sure the empire was always a symbolic representation of the Nazis, and the space battles were an ode to dogfights from WWII footage that captured Lucas' imagination from a young age, but he never bothered to question what a lowly storm trooper might be thinking.

Boyega is one of the highlights of the film. Both his performance as Fin, and his instant chemistry with both Oscar Isaac’s Poe Dameron, the resistance's best fighter pilot, and Daisy Ridley’s Rey makes for an enjoyable adventure. In fact, Fin and Dameron’s early escape from a bad situation feels like a hint of things to come in future installments, should these buddy resistance fighters continue to work together. And as for the numerous villains of the film I’ll simply say, enough is given, particularly for main baddie Kylo Ren (Adam Driver), and enough is withheld to be explored in the future. They are still representative of wars of the past. One speech made by Domhnall Gleeson's evil General Hux is reminiscent of old footage of speeches made by Adolf Hitler. And images of storm troopers using flame throwers to burn down homes is a likely ode to the Vietnam war. These are some of the touches that Abrams give us that do what Lucas had intended with "A New Hope."

The other thing Abrams does exceedingly well is find little opportunities for humor. BB-8, is a character that manages to become, dare I say, more likable than R2-D2 in his first appearance in the series. His purpose isn’t too dissimilar, but it’s the mark of a good director and great prop design that they manage to capture a great, humanized performance from this working robot. Rather than fill the script with goofy, cutesy, child-friendly characters that become instantly grating to most of the rest of the audience like Jar-Jar Binks, Abrams fills his script with laugh out loud moments. For instance, there’s a moment in which an angry Kylo Ren hacks and slashes at an inanimate object just to let out his rage, but Abrams cuts away to show two patrolling storm troopers who notice the commotion and simply turn and walk away rather than find themselves the target of his rage. Or another moment in which BB-8 gives a makeshift thumbs up to another character who had said, “thanks.” These are the sorts of small, hilarious touches that Abrams puts on “The Force Awakens,” that work in the moment, without becoming too jokey, and could have served Lucas well in his earlier films.

It’s easy to get the sense that “The Force Awakens” was the film J.J. Abrams became a director to make. It’s clearly his dream project. He turned “Star Trek” into “Star Wars” in order to make a compelling case for himself to direct this film. And he delivered. He avoids the missteps that made Lucas’ prequels such a divisive trilogy. In Abrams, Disney found someone whose strength's are in casting, and working with actors. These are two of Lucas' weakest points as a filmmaker. Abrams helped make this film better written, and better performed than Lucas' previous efforts. The actors share more charisma and chemistry than any of the characters found in the prequels, and rather than an over reliance on green screen and CGI, Abrams makes great use of real locations and practical effects (including people in suits and puppetry). He also has a greater sense of where to put his camera than Lucas. One shot feels appropriately claustrophobic as Kylo Ren threatens a character with his lightsaber held uncomfortably close to their neck. The shot is done in close up, the unstable nature of Ren’s lightsaber distorting the air around it. We can nearly feel the heat of it ourselves. It’s the sort of careful attention to detail and beautiful cinematography that was lacking in some of Lucas’ earlier films.

It’s a pleasant surprise just how funny, heart-warming and well paced this film is. But make no mistake “The Force Awakens” is still far from a perfect film. In the years to come after the dust settles from its massive launch, and our collective high winds down, more faults will be noticed. Nevertheless it is a film that succeeds in what was intended, and manages to be a great time spent at the theater. As such it’s hard to imagine a better return to the world of “Star Wars.”