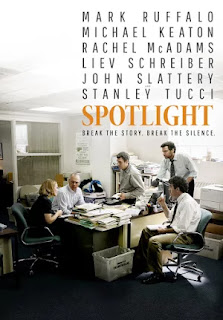 For a film about investigative journalism, “Spotlight” does exactly what it should. It is a piece of investigative journalism. It doesn’t draw attention to itself, it tells. It tells simply, and effectively. As a matter of fact, effective might just be the best word for it. As a piece of cinema, it isn’t flashy. Neither the performances, nor the production call attention to themselves. It is effective. And that’s the best kind of compliment you could give a film such as this.

Director Tom McCarthy (whose debut film, “The Station Agent,” I loved) doesn’t want you to marvel at where he put the camera, or how he framed his actors, or even how he transitioned from scene to scene. Nor do the performances he received from his star-studded cast want to make you saw, “now there’s an Oscar winner.” That isn’t to say the actors aren’t good. In fact they are all extremely good. But they’re better at being subtly effective than they are showy (and there’s a number of actors here that are known for their showy performances). To feature any of these things would be to distract from the purpose of the story they’re telling.

It is, as we know, the story of The Boston Globe’s “Spotlight” team that in 2001 investigated and reported on the sexual abuse of children by Roman Catholic priests in Boston from the late 1970’s to the early 2000’s. As is a matter of history, their work won them the 2003 Pulitzer Prize for Public Service, but as McCarthy shows us, didn’t put an end to the atrocities. The film is very effective in its attempts to show us the victims, not in an overly sympathetic way, but in a way that serves its purpose. The team is made up of, Mike Rezendes (Mark Ruffalo), Walter 'Robby' Robinson (Michael Keaton), Sacha Pfeiffer (Rachel McAdams), Matt Carroll (Brian d'Arcy James) and each of them gets a similar amount of screen time to either interview victims, or the people that hurt them, or failed to help them.

Spotlight gets assigned the story when new editor Marty Baron (Liev Schreiber), having recently arrived from Miami, comes at the situation with a fresh set of eyes and sees potential. He wonders how they could be aware of a case of sexual abuse within the Catholic church and not done their due diligence investigating it. The rest of the film is an ode to good old fashioned investigative journalism. The Spotlight team’s initial research and interviews reveals how easily the stories are swept under the rug and quickly forgotten.

Rezendes (Ruffalo) and Pfeiffer (McAdams) get a number of scenes to interview the now adult victims. It’s important to see the effect the abuse has had on the victims as well as hear their stories. McCarthy thankfully doesn’t offer reenactments, opting instead for more powerful moments spent hearing these victims painfully explain in detail their experience and how it’s affected them since. For Carroll (Brian d'Arcy James) the story hits a little too close to home in a literal sense. His family home is just down the street from the home of one of the priests they’re investigating. It prompts him to put a note on his refrigerator warning his kids to stay away from the house in question.

The more they investigate the more priests they realize are involved, and just as disturbing, how many people both within the church and outside the church have contributed to the coverup. Many of the roadblocks the team encounters are due to the people of Boston not wanting to attack the church, and the church’s lawyers working hard to bury the stories and cover up the records. There is also a disturbing sense that the church has done enough good for the community that any wrong doing should be overlooked. Many simply won’t speak against the church even if they know something, or have been a victim themselves. There’s also a number of lawyers involved that do their best to derail the investigation.

That’s where Walter ‘Robby’ Robinson (Michael Keaton) comes in. He has a knack for meeting with these people on friendly terms and dropping in tough questions they weren’t ready to answer. His early interactions end with the person refusing to answer questions and leaving frustrated. Later the people he meets with are annoyed to see him, or approach him with a request to cease and desist (though not in so many words). Often even these interactions end with Robinson turning things around and asking the sort of questions that force the person to make a frustrated retreat.

Schreiber, from the start, plays Baron as the world weary newspaper man bogged down by the weight of the tough stories he has spent his career telling. Though the Spotlight team also comes to be similarly weighed down by the immense story they’re working on, Mark Ruffalo is the only one to get any sort of emotional outburst. It’s featured prominently in the trailer, and speaks to the frustration of everyone on the team that something has yet to be done. And in that frustration there is an eventual realization that they are equals in the blame. Stories have been brought to their attention in the past, and they had done little about them. The fact that these acts continued without public knowledge is as much their own fault as anyone else’s.

Nevertheless, we know Spotlight did print the story and many similar ones, but it’s with melancholy that the film regards its final scenes. The team is not made into heroes, and they are not celebrated with pats on the back. Often news reporting is such a thankless act. The most affecting scene is one toward the end in which Ruffalo’s Rezendes delivers their freshly printed paper to a lawyer, who had been instrumental in aiding their investigation. Yet the lawyer (a very subtle and effective Stanley Tucci) tosses the paper on his desk and heads into another room where more young victims sit waiting to speak with him. Rezendes stands peering through the window with the painful realization that the story won’t end here.

It’s not flashy, it’s not showy, nor is it preachy. It is, like a good piece of journalism, a teller of facts. The great performances, and the straightforward way in which it’s shot, effectively tell the story without embellishment. I can give it no greater compliment. As such, I can without hesitation accept the inevitable Oscar attention this film is due to receive. It is as deserving a film as any I’ve seen this year.

Posted by Zach Owens
Email ThisBlogThis!Share to TwitterShare to FacebookShare to Pinterest
Labels: 2015, 4.5, based on a true story, drama