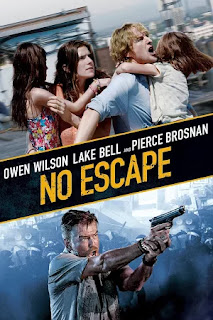 "No Escape" can be tense, but more often it's predictable, and utterly distasteful. If the continuously borderline offensive nature of the script weren't enough, it also features enough disaster movie cliches that it begins to feel like a parody, but no one bothered to tell the actors. It's the sort of film where the leads can stand out in the open and the aggressors fire weapons in their general direction cutting down everyone and everything around them except the leads themselves. And chases end in a last second escape every single time. One rooftop sequence takes the aggressors a conveniently long time to walk from one side of the roof to where the family slowly talks loudly about jumping to an adjacent rooftop. They all eventually do make the leap (or get thrown) just in time, leaving one Asian man to die right behind them. As much as these types of scenes can be expected in a film like this, it becomes the ending of every scene.

That may not have been a total deal breaker if the script bothered to give voice to these aggressors, or the people of the unnamed nation the film takes place in for that matter. There's not even an attempt at depth to the people or the situation. The filmmaking is clunky and over-edited rather than stylish. The lead characters aren't interesting, and they don't spend much time struggling with any of the context of what's happening or what they've been forced to do. The action and improbable situations continue to escalate but never feel realistic and their inevitable resolutions feel laughably and conveniently contrived.


Worse yet, this script follows all the typical attempted misdirections in order to make us worry the family may have finally met their end. Yet it never does anything interesting with those situations. There are enough eye-roll worthy improbable escapes to fill the runtime that it shouldn't be of any surprise that despite the title's assurance, there is escape. Repeated escape.