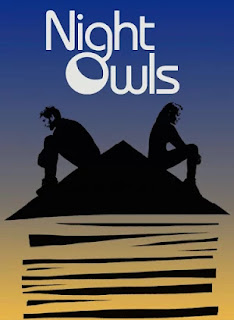 It’s getting increasingly difficult to create a romantic comedy that feels fresh. You need a novel concept to force the two leads together and then you need two actors who can sell the audience on their budding relationship. Once you’ve seen a few of romantic comedies it’s easy to spot the cliches that most of them peddle over and over. That’s what makes “Night Owls” such a refreshing little film.

One night after a party Kevin (Adam Polly) goes home with wild, impetuous Madeline (Rosa Salazar), who he just met. They spend a drunken, amorous evening together. However, a little later on as he’s preparing to leave he discovers that it isn’t her house at all, it’s his boss’ house. And the girl turns out to be one of his boss’ former affairs. Their breakup caused an angry, depressed Madeline to get revenge in the only way she knew how. Yet as petty revenge goes, it rarely grants satisfaction.

It leads to an attempt to overdose on Xanax, but Kevin finds her in time to help. He frantically calls his coworker who knows more than he’s letting on, but he helps Kevin because it serves his interest. They have a friend, who is a foot doctor, stop by and give her a quick checkup. He tells Kevin that if she falls asleep her brain will stop sending signals to her lungs to breathe. To be safe, he’ll need to keep her awake till morning. That fairly simple setup turns into some slapstick comedy as Kevin is forced to wake her up and keep her awake for far longer than he’d like. Her strong will and lack of energy makes the task far more difficult than expected.

Kevin is the nice guy who isn’t strong enough to stand up to anyone. And she’s nicer than she’s willing to let on. Between the two of them, she’s certainly the stronger of the two. But it’s through her and due to their situation that he learns to be stronger and stand his ground. Yet it isn’t just Madeline he needs to learn to stand his ground with, he idolizes his boss but comes to find out more than he expected about him. The boss is a big name coach at a small college. Kevin holds him in high regard even if he doesn’t deserve it. Not that this is the sort of film you’d care about spoilers with but I’ll leave you to discover the specifics about the coach. But what’s interesting is that both Kevin and Madeline have their own very different obsessions with the coach. What they find in each other is the type of person that’s been absent from their lives. Their friendship may cure them of their obsessions, while perhaps becoming something more.

What makes this newfound relationship work, is that it begins as a genuine friendship rather than anything amorous. Their situation requires them to be together, but because she has to stay awake, they’re forced to talk which inevitably allows them to get to know each other. But because there are no expectations they get to know each other in a way that doesn’t seem phony like some introductions can. To him, she’s strong, cool and adventurous, and to her, he’s genuinely nice and caring. These are rare qualities for them to find in another person. Yet as much as they may be growing to like each other, they are still very different people forced into each other’s company. It inevitably leads to arguments. Their early arguments are general fights over their situation, but they change in tone by the end as their more personal feelings get involved. Their conversation naturally moves from fun and games to personal information and back and forth. Yet inevitably getting to know someone allows a person to verbally injure more effectively.


To a certain extent the structure follows the standard romantic comedy formula of bringing them together, and tearing them apart only to bring them back together again. But here it’s done in a way that feels fresh. Furthermore what makes the film so watchable is the natural performances from its leads. Both Adam Pally and Rosa Salazar feel like they're ad-libbing the entire film. They have strong chemistry from their first scene together. Slapstick is so rarely done well these days, and scenes of fighting are rarely so entertaining and well performed by charming compatible lead actors. Charles Hood’s script is clever and surprisingly well paced. It features a relationship that feels genuine and without all the cliches found in typical Hollywood efforts. For a director who is making just his second feature film, and first in 8 years, this is an indie that’s surprisingly well done. The real shame is that it won’t get the press or advertising it deserves.