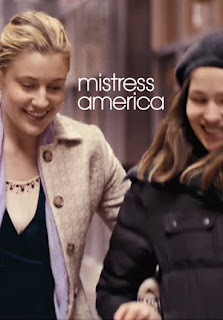 
Noah Baumbach is an understated filmmaker. His often dialogue heavy films rarely aspire to the sorts of visual flair that his friend and frequent collaborator Wes Anderson is known for. If there were a filmmaker to compare Baumbach to, it would likely have to be Woody Allen. Both directors are known for making films set in New York (although Allen has ventured elsewhere later in his career), and they both feature fast paced, quick witted dialogue. For these filmmakers their craft is in their dialogue and directing performances that feel so natural they could almost be adlibbed.

For Baumbach, there is no better collaborator than Greta Gerwig. She makes such a natural performer that she’s easily the template for an actor in a Baumbach film (much the way Diane Keaton was for Allen). She manages to be charming and funny even in roles that would be pitiful and perhaps even unlikable in a lesser talent's hands. Together their scripts specialize in finding the humor in frequent off-hand remarks and expressions of self reflection. Even if some of these come across as throwaway bits of dialogue, they are just as essential as the main storyline to what makes a Baumbach film feel like a Baumbach film.

Their previous film, 2012's "Frances Ha," was the film that confirmed Baumbach's place among directors I actively follow. Here he and Gerwig reteam for another film about a female friendship that suffers a breakup of sorts. In fact, Gerwig's Brooke could easily be Frances a few years after the events of that film. And even if "Mistress America" lacks the clarity and satisfying ending of "Frances Ha," it manages a similar feel.

Tracy (Lola Kirke) is a college student in New York who is struggling to find her place. She befriends a fellow aspiring writer in Tony (Matthew Shear), but begins feeling like the third wheel once he starts dating Nicolette (Jasmine Cephas Jones). By her mother's request she meets her soon to be stepsister. She is Brooke, an impetuous and free spirited 30 year old trying to start her own niche restaurant. She might even find success in her endeavor if not for her whirl-wind personality constantly pulling her in different directions. She always has a lot to say, and as a result doesn't have the time to listen to anyone else. She is exactly the sort of funny, bizarre, yet believable person Greta Gerwig has built her indie filmography playing.

Both Frances and Brooke are characters that represent the directionless young adult. They're just out of college, and have hopes for fame, fortune, and recognition of whatever sort they can find. They simply don't know how to achieve it. Where Frances had no plan to take her first step, Brooke has perhaps too many potential plans and a fear induced inability to pursue any one of them. Nevertheless she is the sort of youthful, fun loving person that people tend to find inspirational even if they don't manage the success they aspire to. And while Tracy is enamored with her, she also pities her for failing in her endeavors. She does, however, manage to be a positive influence, encouraging Brooke to pursue her latest plan.

She is the exact opposite of Tracy’s only school friends. Tony is all too confident, or perhaps insecure about his writing (funny how often those opposites resemble each other). That tends to manifest itself as knocks on anyone else's writing, Tracy's in particular. The two seem to have an on again off again attraction for each other, and it's obvious enough that Tony's perpetually jealous girlfriend Nicolette frequently and very openly accuses him of being unfaithful.

Both Tracy and Tony hope to submit a short story that will impress the college's prestigious literary magazine enough to allow them entry into their exclusive group. Yet after her first submission is rejected, she finds herself struggling for a new subject until she spends an evening with Brooke. Tracy marvels at her personality and life-style. Yet her writing, which is a thinly veiled piece about Brooke, is as fascinated with her failure as much as her drive for success. She may have lots of ideas, but she has little ability to follow through on any of them. She flits about from one idea to another, and it tends to lead to bad blood between her and the people who pick up the ideas she drops.

The second half of the film features an extended scene involving Brooke's attempts to pitch her latest idea to her friends and would be investors, despite her anger toward them for having stolen one of her past ideas. There is as much talk of the future as there is fights about the past here.

It does, at times during this lengthy segment, feel as if it’s gone off the rails. Before and after making her pitch to these friends (friends might be a generous word for their relationship), things devolve into frequent shouting matches. The ever growing cast of characters, many of whom feel along for the ride, tend to stand and spout their fast paced dialogue. Many times there are several arguments happening at the same time. While it mostly hits for the deadpan humor it’s going for, it confuses the purpose of the scene, especially since most of the arguments go nowhere. It does manage to add background for some of the characters, but the reality is most of them don’t matter to the story. Their added participation confuses a somewhat muddled script to the point where it's easy to lose track of this film's direction. Yet that is, in all likelihood, a deliberate choice considering the state the main characters find themselves in.

These scenes do very little visually. In fact, most of them play out like a stage play, where rarely does the location change and Baumbach simply sets his camera in the back of the room hoping to fit everyone on screen at the same time. Yet if the visual element is understated, Baumbach pairs it with an original soundtrack composed of dreamy 80’s-esque synthpop sounds by Dean Wareham and Britta Phillips (of Galaxie 500). It is one of the finer pieces of artistry accompanying the story.

Yet to leave it at that would be to discredit the script by Baumbach and Gerwig. If they do manage to wander off the rails in this lengthy middle portion of the film, they do manage to right themselves by the end. Brooke and Tracy may or may not get what they want, or thought they wanted, but they managed to grow and learn things about themselves anyway. It is, as it was with "Frances Ha," a necessary stepping stone on the way to their next destination. This is the subject of Baumbach's films. As any good story teller should, he finds the stepping stones more fascinating than the final destination.