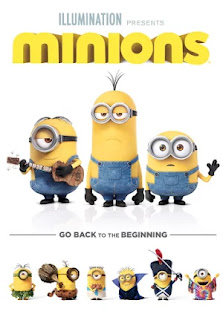 If you loved those cute, gibberish speaking little trouble makers from “Despicable Me” and always wanted more from them, “Minions” will undoubtedly scratch that itch. However, if you weren’t a fan of those movies, I doubt a stand alone movie about the minions will win you over. But stranger things have happened. Like this movie actually working, for instance.

The minions were always cute and lovable little side characters, but the heart of the “Despicable Me” films was easily its human characters. To remove them would surely leave you with an empty piece of entertainment. Yet you might be surprised at just how much heart there is to “Minions.” If Pixar can muster a surprising amount of heart from their mute characters (I’m thinking specifically of Wall-E), then surely these characters, who speak some form of near understandable gibberish, can find some heart as well. And it does to an extent. While it’s not as deep or moving as something found in a Pixar film (it isn’t trying to be), it does manage to make us care about these cute little guys. Even if the opening sequence depends largely on voice over narration rather than borrowing from silent film to create something truly unique.

While we’re on the subject of sound and language, the minion’s gibberish often features lone recognizable English, French or Spanish words that, along with their body movements says enough to be understandable. In fact it’s something of a minor miracle that by the end of the film I thought I might have started to understand “minionish” (is that what their language is called?).

It starts with a fun collection of vignettes in which the minions search for the most powerful and evil being on Earth to serve. It begins in the age of the dinosaurs and works its way through history stopping in on their time spent with the pharaohs and even Napoleon. The latter of whom exiles them to Antarctica for their clumsy use of a canon. It’s there the film actually begins. By the 1960’s, which they’ve dubbed 42 years B.G. (Before Gru), the minions find that spending their days entertaining themselves with games cannot sustain them much longer. They find themselves in a life threatening state of depression. Being minions, they must fulfill their purpose of serving the baddest villain around. With that in mind, one brave minion, named Kevin sets out with two traveling companions in search of a new master.

His companions are the one eyed Stewart, who was volunteered by other minions because he was sleeping when the request for help was made, and the small but eager Bob, who is even small and childlike by minion standards. Nevertheless their travels lead them to New York, where they learn of villain-con, a comic-con style event for villains taking place in Orlando, Florida. Getting there requires hitching a ride with a humorous family of villains lead by the voices of Michael Keaton and Allison Janney. It’s a fun little section of the film that almost ends too quickly, especially considering the drive is from New York to Florida.

Nevertheless, the film quickly moves onto villain-con where the minions meet the most famous baddie in the world. She’s Scarlett Overkill (Sandra Bullock), but sadly she doesn’t live up to her name. Her reputation seems dependant on the sound of her name rather than anything we see her do. Bullock tries her hardest to bring her to life, but she is a boring, poorly established villain with a plan that lacks the extremity to live up to her name or to qualify her to be known as the world’s best villain. That plan involves sending the minions to steal the Queen of England’s crown. She intends to take no part in the effort, but makes it clear that if they fail she will set her sights on them.

While they don’t necessarily fail, they don’t complete the mission as intended and Scarlett keeps her promise to angrily come after them. From here it’s as action oriented as any blockbuster. But what makes “Minions” indelibly likable is its adorable characters and its wealth of clever sight gags. Slapstick humor is a dying art form that has been relegated to cartoons and even few of them do it this well. The fact that “Minions” is about a cute set of characters means it’s like a pet that occasionally gets itself into trouble. Even if not everything hits the mark, and it occasionally does something to make you roll your eyes, all it takes is one look at those puppy dog eyes and they’re back in your good graces. They do enough right and they’re enjoyable enough to spend time with that their slight missteps are forgivable. That’s probably why Gru keeps them around anyway, right?

The animation is quite beautiful, even if it’s cartoony. The bright colors will be pleasing to the eye for viewers of any age. While the musical choices may be lost on younger viewers, the collection of 60’s classic rock from The Turtles, The Kinks, The Who, and even Donovan make for a great soundtrack. Yet they’ll likely enjoy the upbeat nature of them as much as anyone. Just like anyone can enjoy the upbeat nature of this film. It’s certainly not the highlight of the series, but it’s a solid, comical effort nonetheless.