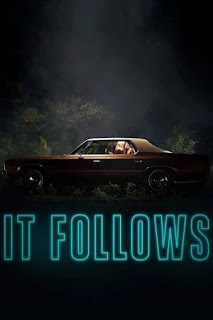 “It Follows” is both entrancing, and disturbing. It's a simple concept film that doesn't relish in gore or jump scares. It's effectively creepy and atmospheric by other means. It's slow, smooth camera movements set to an eerie soundtrack by Disasterpeace is very effective at setting and maintaining the desired mood for director David Robert Mitchell.

It begins by following a teenage girl running frantically around her neighborhood while curious onlookers stare at her in confusion much the way we regard the scene. Later we see the ghastly scene of what happens to her after she has a close encounter with the ‘It’ that serves as the supernatural monster to the film. It’s our warning of what could befall the main character should she fail to stay a step ahead of it.

She’s Jay (Maika Monroe), the attractive girl next door that all the boys like and all the girls wish they were. But after a brief sexual encounter she finds herself the target of some unknown evil. Before he leaves her to whatever fate would befall her, he explains what little he knows of the terror. It can look like anyone, typically people she knows, but no one else can see it. It walks slowly, but it won't be fooled. There's only one of it and because it moves slowly it’s easy enough to avoid so long as she stays in areas that have more than one exit and doesn’t let it get too close. He also tells her, her best bet is to try passing it on to someone else. Yet even if she does, she wouldn't be completely out of the woods. One way or another the constant fear of something slowly following with sinister intentions would be enough to keep most awake at night.

It does keep Jay awake, even as she attempts to surround herself with friends. In fact this scene is one of the more disturbing ones in the film as she realizes that she doesn’t feel safe inside her own home. “It Follows” plays on our fear both literally of the supernatural and metaphorically of STDs. These things have no boundaries. No place is safe. Yet more generally the subject here is death itself. The ‘It’ is simply a form of the grim reaper. It follows and catches up with everyone eventually. Like the characters in this film we think we can out run it or stop it, but no one can. It will eventually claim us all, we can only hope to stay one step ahead of it.

As far as the characters are concerned it's something of an inconsistency that the film is so concerned with both random hookups and one that feels ever so slightly more meaningful despite the story's premise. In a way their actions make sense, but then again they don't. There's a naive optimism about the way they take chances not only with their bodies, but with the spectral creature that terrorizes them. Yet this is, I think, partly Mitchell's point. Teenagers, as they do, haven’t lived enough to respect life and love the way they should. As a storyteller he is obviously fascinated by mortality, but that is likely the last subject on any teenager's mind.

As carefully planned and executed as Mitchell's film feels there's also an impressive, understated design to it. It could just as easily be set in the past as the present, or even the near future. It's clearly Detroit, but the clothing style, the cars, the tube TV playing old timey TV shows and black and white movies give nothing to pin down a particular time. Though they seem to indicate the past, until you see one unusual clam shell style touch screen cell phone that seems to be simultaneously a relic of the past and a piece of futuristic technology yet to be designed.

For a genre that seems to be looked down on, there has been a handful of highly regarded indie horror films that could be sparking their own new wave of sorts. If big budget horror films haven't been working, smaller indie films like "It Follows" come along and impress critics and fans of the genre alike. If the genre is going more towards solid indie efforts like this one, I'd count it a good thing, particularly if it means fewer poorly made Hollywood horror flicks.