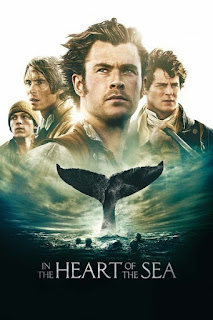 As historical fiction has proven over the years, there’s a romanticism to maritime life. Whether it’s tales of beautiful port cities or pirates plundering gold laden merchant ships or even whalers hunting a prize catch, novels, films and even video games have tried countless times to capture our imaginations with the beauty, adventure and even pain of life at sea.

“In the Heart of the Sea” is the latest venture in the genre. It’s the cinematic retelling of the non-fiction book written about the events that inspired Herman Melville’s classic work of fiction. Which is to say this is the true story that inspired Moby Dick.

Curiously, Ron Howard and screenwriter Charles Leavitt portray the film primarily from the perspective of Owen Chase (Chris Hemsworth) despite not using Chase’s own written account titled, Narrative of the Most Extraordinary and Distressing Shipwreck of the Whale-Ship Essex. Instead they used Nathaniel Philbrick’s acclaimed work of nonfiction, In the Heart of the Sea: The Tragedy of the Whaleship Essex. Yet using Philbrick’s work seems conceptually flawed. It frames the story as a narration by Tom Nickerson (Brendan Gleeson) who is one of the now aging surviving members of the crew of the Whaleship Essex. He tells the story to a visiting Herman Melville, who writes it as notes to be referenced in the writing of his work of fiction. The conceptual flaw being the disconnect produced by constant changes in perspective. Spending the majority of our time with Chase only to be pulled away for random bits of extraneous conversation with another eye witness has a jarring effect on the proceedings, particularly when it purposely distances us from the disturbing details of the moment.

These asides mostly begin as simple observations, but later become something of a side narrative of their own. Its main concern is the confession of past deeds that have left him in a depressed state of guilt. These details he reluctantly admits for the first time to Melville as if some sort of therapeutic treatment. Melville inadvertently becomes a therapist of sorts listening to him confess this story he’d kept locked up for years.

Nevertheless, once we travel into the story we see a time that has rarely look so good on film. Anthony Dod Mantle’s cinematography is beautiful. He and Howard often choose to utilize wide shots to capture the endlessness of the sea. It also allows them to show off their full-sized replica of the Essex, and the fact that they actually put their actors up high on the rigging. Howard’s vision is beautifully rendered from the costumes to the set design to the CGI whales. During more intense moments, he gives us close up shots of ropes being pulled quickly and stretched. The editing is effective in building tension during one stormy scene and several encounters with whales. Yet even more frequently than the wide shots are far more claustrophobic shots onboard the ship. While these add that element of lacking space on a seafaring vessel, they also suffer from a very green screened look. It’s about the only mark against what is otherwise a very pretty film to look at.

It takes its time to give us a bit of the difficulty of travelling by sea, but most of the earlier portion of their journey is spent setting up the two leads. Owens Chase (Chris Hemsworth) had been promised his own captaincy but the men paying for the venture assign George Pollard (Benjamin Walker, who resembles a young Liam Neeson) the captaincy simply because he’s related to one of them. The decision comes in spite of the fact that he has little experience on a ship. And it leads to some early tension between the two. Chase obviously feels he deserves to be captain, and he proves himself a capable seaman early on in their journey. Pollard looks on in jealousy, and attempts to run him down verbally at dinner by bringing up Chase’s humble background and painful family memories. It’s a petty attempt, but serves its purpose. The matter of class is one frequently returned to. Despite Chase’s outstanding skills, he isn’t born of privilege like Pollard. Yet as interesting as this clash of characters might be it pales in comparison to the battle of man vs nature.

In fact that battle between Chase and Pollard is quickly put on hold in order to accomplish their goal, and then permanently put away once they encounter the white whale and find they have a much bigger struggle to deal with. Yet this frequent jumping from subplot to subplot may be jarring for some viewers. It’s a rare film that can successfully pull off such a packed script. Nevertheless “In the Heart of the Sea” tries earnestly to be about many things at once, even if it means many of the subplots are forced to a close less than adequately.

Less than adequate is also how I’d describe the character development. Hemsworth’s Chase is given the standard Hollywood introduction that has him leaving a pregnant wife behind while he heads out on a lengthy, treacherous journey. Maybe it’s in the book, and maybe it’s the way it happened, but it’s such a Hollywood cliche that it’s hard to qualify it as character depth, especially when it’s all we get. The film doesn’t bother to tell us who Pollard was or even who Nickerson, the eventual narrator, is. In fact aside from one scene in which he is entrusted the task of invading a whale’s carcass for precious oil, young Nickerson isn’t given much in terms of screen time.

Nevertheless, as we know, the white whale has a humanlike sense of vengeance. It attacks them for their killing of other whales, and leaves the Essex dead in the water. With their ship now set aflame, they’re stranded aboard longboats while the film quickly turns to survival mode. Each of the different things that “In the Heart of the Sea” wants to be about start to feel like their own separate short films loosely tied together by similar characters and settings. But it becomes increasingly difficult to care about them when nameless sailor dies for unknown reasons, or Pollard and his very underdeveloped cousin have to choose who to kill and eat for survival. Sure we’re supposed to struggle with the very idea of what these men had to do in order to survive, but how much more compelling would it have been if we’d cared about the people involved?

Another moment that may or may not have been in the book finds our stranded whalers fearing for their lives as the white whale approaches once more only to look up at Chase who stands ready to throw a spear into its side. The moment can be read any number of ways. Either it’s a moment that rings with our modern thoughts of disapproval of whaling, as Chase uncharacteristically (for him and for the values of the time) finds himself unable to harm the creature. Or unlike Melville’s Ahab, he’s choosing to let go of vengeance. Either way neither possibility is satisfying. Neither the moment they spend gazing into each other’s eyes, or the idea that Chase’s values suddenly jumped forward to that of someone in 2015 can be described as anything other than contrived.

It isn’t that “In the Heart of the Sea” isn’t entertaining to watch, or thoroughly enjoyable in terms of its visuals. It is those things, yet that fact makes it all the more disappointing that its potential is squandered on such an uneven pace, underdeveloped characters and a general lack of concentration.

Posted by Zach Owens
Email ThisBlogThis!Share to TwitterShare to FacebookShare to Pinterest
Labels: 2015, 3, action, adventure, based on a true story, Book