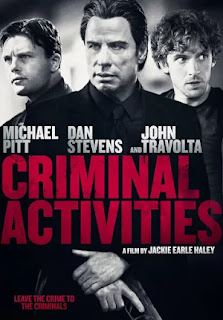 Jackie Earle Haley's directorial debut is just the latest in the crime/gangster genre that attempts to clone the films of Quentin Tarantino and/or Guy Ritchie. As these typically do, these films only serve to remind us of just how great the gangster flicks of Tarantino and Ritchie are.

Haley and many other filmmakers have attempted to recapture their well paced and always aesthetically pleasing films, but never manage to conjure the same quality. Here Haley starts the film with a funeral for a friend of the four main characters only to move them to a diner where they can plant the seed for the rest of the film's deeds.

Noah (rising star Dan Stevens) convinces his former high school buddies (and bullies... it's all the past right?) that he'll foot the bill if they agree to partake in a get rich scheme involving buying stocks for a startup company on the verge of making it big. But after the company's CEO gets arrested, the stock tanks and they're all out of luck. Soon after the news breaks, they're paid a visit from the gangster Noah borrowed the money from. He's Eddie, played all too tamely by John Travolta, and he offers them a deal they can't refuse. All they have to do to settle the debt is kidnap a criminal and hold him until a prisoner exchange is agreed upon by a rival criminal organization. Supposedly they captured Eddie's young niece, and the best way to get her back is by offering the opposing criminal boss' favorite relative for her.

Nevertheless, Noah and his cohorts Zach (Michael Pitt), Warren (Christopher Abbot), and Bryce (Rob Brown) aren't aware of who they're kidnapping until after the deed has been done. Once they realize, they become the stereotypical inept gangsters swearing at each other and making mistake after mistake until the bosses show up to bring the film to a close. They're trapped in-between two criminal organizations and the feds hot on all of their tails. To say much more would be to spoil the rest of the film.

Haley tries for Tarantino-esque moments of accidental violence, one in particular involves the feds threatening someone to coax information out of him by hanging him over a railing in a parking garage. The moment is brought to an abrupt end when they lose grip of him and he falls to his death. Where Tarantino would have wisely built the moment up and stuck with the perpetrators long enough for the moment to breathe, Haley doesn't have the patience. And none of the people involved have enough screen time to warrant spending time with in the first place. It's just one throwaway moment in a film filled with such moments.

Haley himself gets in on the action playing the part of Eddie's henchman Gerry. He's the only one of the true criminals who gets any sort of backstory, yet it's all too brief and fairly unimaginative in execution. Yet that's a criticism that can be leveled at the film as a whole as well. Haley simply doesn't borrow from the best aspects of what has clearly inspired this film. He's all too eager to rush through the moments that should have been allowed to breathe and yet slower moments spent at the rundown apartment where the four kidnappers hold their prisoner manage to bog down the film causing continued pacing issues.

It's certainly not as fast paced and humorous as a Ritchie film, and certainly not as stylistic and deliberate as a Tarantino film. Even if it features elements of both, it fails to satisfy on the same level as either. It also borrows fairly heavily from another film that to explain the comparison would be to spoil the film, nevertheless you will likely know it if you should decide to see this film.

At some point the film eventually stops being what it's about, late in the film, to be about something far more petty and completely out of left field. Call it a twist if you want, but it isn't necessarily as satisfying as twists found in the films it's trying to replicate. Rather than feeling like a twist the film naturally lead up to, it feels like one the film might have been better off without. Even Travolta and Haley, who are clearly capable of the great performances this film lacks, are forced to the sidelines in favor of the lesser characters portrayed by up and coming actors that seem bored by this film. Travolta's one scene of character building, is a poorly blocked, violent one in which he beats a man with a crowbar. However, the scene's lack of build up and abrupt departure make for a lacking moment. Yet that is, inevitably, how I'd describe the ending as well. It appears, Taratino, Ritchie and the few other filmmakers that can make a film such as this work are still miles ahead of their imitators.