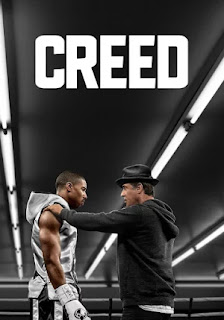 From the opening sequence of "Creed" it’s obvious that director Ryan Coogler is a special talent. The way he moves his camera and lets shots linger, the way the camera moves alongside the characters, the way he masters one bold, but brilliant long take all point to a filmmaker with a strong cinematic vision. He's exactly the sort of filmmaker you need when reviving a beloved franchise.

That franchise is, of course "Rocky," and "Creed" has an aging Rocky (still played by Sylvester Stallone) passing on his knowledge to the son of Apollo Creed, his late friend and former opponent. It begins with young Adonis (who goes by Donnie for most of the film) being pulled out of juvenile detention by the wife of Apollo Creed (Donnie is the son of Apollo and one of his extramarital affairs). Coogler's attention to detail is evident from this early scene. He gives us brilliant touches like a careful zoom in on the hand of young Donnie to capture the slight loosening of his clenched fist when he decides to allow Apollo Creed’s wife to take him in.

Once he becomes a young adult Donnie (Michael B. Jordan) has the good job, the nice car, and the lovely house in LA with his adoptive mother, but a drive for boxing is in his blood and can't be ignored. So he moves to Philadelphia in the hopes of training with the now long retired Rocky Balboa. Once the move to Philadelphia takes place, the film starts to resemble the original "Rocky" from the unproven boxer being given a shot by a famed boxer to the pursuit of love with an attractive neighbor. These similarities go a long way toward recapturing the magic of the original. There's even a training scene that mirrors the famous running in grey sweats scene, and the Rocky theme ("Gonna Fly Now") bursts its way in during the climactic fight sequence. However, Coolger and his writing partner Aaron Covington have the ambition to establish their own narrative as well, while successfully devising a continuation to Rocky's storyline in a way that feels well worth the effort. Rocky's battle to come to terms with age and mortality and Coogler's brilliant direction lead to the best performance Stallone has given in years. It's a reminder that he can act, and is certainly capable of deeper performances than the ones found in the sorts of dumbed down action blockbusters we expect to see from him.

There’s a touching moment where Rocky heads to the cemetery to pay his respect to the graves of Apollo and Adrian. He chats about how things have been going lately and keeps them up on the current events in the paper. It's a careful acknowledgment of the past, of which there are several. Rocky's grappling with age wouldn't feel as moving if Coogler didn't start with reminders of his past. One of those reminders is Donnie himself. And the relationship between he and Rocky is established and handled with care. Despite the relationship that forms between Jordan's Donnie and Tessa Thompson's Bianca, the film tends to be at its best whenever Donnie and Rocky are together on screen.

Despite the story's similarities to the original "Rocky," Coogler turns the storyline on its head. Both Michael B. Jordan and Tessa Thompson play far more charismatic people than the love interests in the original "Rocky." And rather than coming from a blue collar job, Donnie has to give up his high paying job and ritzy status in LA in order to pursue his dream. Coogler modernizes and world builds with the sorts of ESPN style videos that introduce the rest of the world to boxers and builds excitement for upcoming fights. He also displays Donnie's opponent's records in popup graphics that feel much like a televised event and properly establishes the threat he's about to face. It's a clever way to establish Donnie's opponents without lengthy expository scenes.

When he isn't training or fighting, Donnie spends time with Bianca, a local singer who happens to live in his apartment building. They meet due to her tendency to practice her music loud enough that the rest of the building can hear even late into the night. He would have angrily told her off if he hadn’t been instantly mesmerized by her. Their relationship is more lovingly established than the one found in the 1976 original.

For his credit Michael B. Jordan stands in the ring toe to toe against real boxers and makes it look believable. Coogler brilliantly chooses to make Donnie’s first real fight in the ring one long unbroken take. The longer the scene goes on without a cut the more tension is built and the more prowess is on display. Both on a technical level for Coogler, and a physical level for Jordan, the scene showcases the talents of these rising stars. In a video for NY Times, Coogler narrated the scene and described how talented Jordan is to have been able to act while remembering the choreography and perform both in a convincing matter. He also described the technical achievement of the long take that carefully handles the audio in a way that allows these boxers to feel alone on an island. Their trainer's voices would feel very distant while standing alone in the ring. It's refreshing to hear a director speak so enthusiastically about the technical craft of filmmaking.

After he's won a few fights, the boxing world starts to take notice of him, particularly when word spreads that he's the son of Apollo Creed. When a famed boxer’s manager takes an interest in making their last fight a much publicized match against the up and coming son of Creed, Donnie has to agree to accept his father’s famous name. Yet he’s determined to earn his way based on his own merit rather than being gifted attention and respect due to the famous relative he isn't sure he's worthy of. Nevertheless accept it he does, and watching Jordan's Donnie learn to accept his heritage and grow into someone worthy of wearing his father's signature boxing shorts is one of the great successes of "Creed." The "Rocky" series has always successfully grappled with loss, status and battles against the odds. "Creed" handles these elements as well as any of the previous films, and sets the scene for a fight worthy of the "Rocky" franchise. Coogler delivers on a brilliant match that mixes elements of Rocky's first fight against Apollo Creed, with a more modern fast paced cinematic fight style. Coogler also works in callbacks to previous moments in the film as a means of remembering everything it took to get there. It’s a surprisingly moving finale to a surprisingly moving film.

By now Stallone’s performance has garnered a lot of buzz, and he’s likely to earn a well deserved Oscar nomination. He is as good as he’s ever been. But the star here, Michael B. Jordan deserves as much credit for his performance. He and Coogler’s previous collaboration “Fruitvale Station” won them a lot of praise from critics for their effort. It’s no surprise then that they were given such a blockbuster project to follow up that effort. What is a surprise is what a genuine success this film is. Many young filmmakers struggle making the transition to the big budget Hollywood fare. The fact that Coogler has passed that transition with flying colors is a testament to his talent.