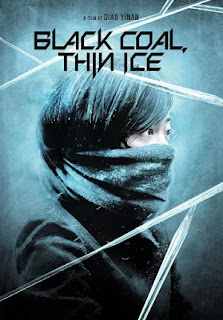 
Sometimes the line between right and wrong is poorly established. Sometimes the bad men go free, and the victims are left to suffer. We take for granted that in some countries gender equality, though still very much a work in progress, is a subject of popular concern. There are places where men get away with sexual abuse in the workplace, and women are expected to keep their heads down about it. There are places where a woman is forced to grow accustomed to being mistreated.

That’s the sort of community found in Diao Yinan’s powerful “Black Coal, Thin Ice.” This film masquerades as a detective investigation of a series of murders, but there is far more beneath the surface here. It begins with police investigating a series of murders in which body parts have turned up at various coal factories around the country. The investigation inaccurately leads them to a couple of truck drivers who attempt to escape police suspicion with a shootout that leaves two officers dead and Officer Zhang (Fan Liao) wounded.

After a jump forward in time, Zhang has become a drunk and removed himself from the police force in favor of small time security. Yet a brief encounter with an old friend still in the process of investigating the murders reignites his passion for following the case. Even without a badge, he finds himself tailing a woman known to have been involved with at least three men who were killed in similar fashion to the murder he had been investigating.

Whether for destroying his life or simply out of curiosity, he continues to pursue the woman. She is Wu Zhizhen (Lun Mei Gwei), a lowly laundry room worker, whose tale her boss tells to Zhang. Shortly after being hired she ruined an expensive coat, and angered the rich owner. She had been married, but shortly after the coat incident her husband died and they never heard from the angry coat owner again. Yet I’m afraid to tell much more, as we’re nearing spoiler territory.

Zhang is the type of man that isn’t afraid to sexually abuse a woman, and most of the men in the film aren’t either. In fact a group of men stand around laughing while Zhang gropes a woman in pretend sexual interest. Even Zhizhen is groped at the laundromat from her own boss. It all points to a bigger problem in society. Zhizhen is a shy, introverted woman who has grown accustomed to being used and abused. She’s as much a victim as she is a suspect. The film is as much about how bad the good guys are, as how interested they are in catching the bad guys.

It’s shot in a slow, but beautiful manner. Yinan knows how to frame a shot. His chase sequences playout slower than expected. Rather than a fast cutting high speed chase, they’re purposely slow and drawn out the way real life happens. Whether it’s a chase on skates, or following a suspect through a dance floor, things move at a slow but deliberate pace. It’s a stylistic, visually unique, often mesmerizing film. Despite its lack of music for much of the film, Yinan finds other ways to create intensity. Yet it’s main purpose is in the telling of the inequality that exists in the world. The good suffer and the bad are allowed to masquerade as the good guys. It’s a beautifully made, and thought provoking film.

As as for the abrupt ending, recall that a significant event occurs at an establishment by the name of “Daylight Fireworks.” The film ends with a sense of melancholy as an unauthorized fireworks display is set off in a residential area during daylight hours. As with the whole film, there is much going on under the surface. Yinan brilliantly packs this film with a density that may be hard for some to see.