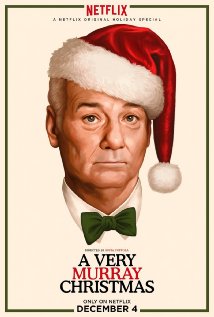 In this first Murray/Coppola collaboration since Lost in Translation, Murray plays a version of himself contracted to put on a live production at a New York hotel with an extensive guest list headlined by George Clooney. Yet a massive snowstorm effectively shuts down New York and ruins their plans. That’s the simple setup at least, because in one way or another, things seem to work out anyway.

Bill Murray is an entertaining performer whose legendary off screen antics have made him one of the celebrities that both other celebrities and fans alike would love to spend an evening with. That’s how I’d describe this variety show masquerading as an hour long film. It features recognizable movie star after recognizable movie star, and a few big names in music as well. They all spend time together bridging the time inbetween musical numbers that most of them take part in as well.

It begins with Murray singing the “Christmas Blues,” and works its way through the usual suspects like “The Little Drummer Boy” and the less likely “Fairytale of New York.” Then there is a comical run-in with Michael Cera who berates Murray and his producers (one of whom is played by Amy Poehler) for the fact that George Clooney is their headline guest. “Have you seen Monuments Men?” Cera asks. “I was in it,” Murray replies. One of my personal favorite segments is the one in which Chris Rock shows up only to be forced into an awkward duet of “Do you hear what I hear” with Murray, despite Rock's protests that he’s not a singer.

Nevertheless their hopes of producing a live Christmas show are quickly dashed as the raging storm cuts the hotel’s power, and Murray is left to find company in the few remaining hotel guests taking refuge in the bar. Fortunately those guests are made up of famous faces like Jason Schwartzman and Rashida Jones (playing a couple disappointed that no one could make it to their wedding), Maya Rudolph, Paul Shaffer, Buster Poindexter (of New York Dolls), and the band Phoenix (who Coppola featured in “Lost in Translation” before they’d made it big).

It depends on your taste, but for me the first half was the highlight. The second half moves into a dream sequence after Murray polishes off a few too many shots. This segment becomes the glitzy, glamorous part of the show that feels more like your typical holiday special. George Clooney and Miley Cyrus ride in on a sleigh, both of whom could only show up in a dream sequence given the raging storm. Cyrus gets to sing a couple of holiday classics, but Clooney is sadly underserved here. He has a fairly hilarious part as a background singer for one Bill Murray lead holiday tune, but he isn’t given opportunity to do much else. So much for a headliner.

To an extent you get exactly what you expect here. Coppola begins and ends with a few glamorous shots of Murray surveying the view from his high-rise hotel. There are Christmas songs, some made up in bright lights like any TV holiday special, and everything in between is Murray’s dry, droll, sarcastic form of humor.

It isn’t without a sense of self awareness, usually at the expense of Murray. He even pokes fun at himself. Aside from the aforementioned crack at Monuments Men, in one of his lower moments Murray points at a picture of himself from Lost in Translation, and laments, “I should have quit right then and there!”

Even if moments like this make it worth it, it’s does, however, feel uneven at times. As fun as it is to hangout with Bill Murray and listen to celebs sing a few holiday favorites, the transition between them can be clunky. And, of course, appreciation of it comes down to whether or not you appreciate the celebs involved. Whether it catches on and becomes a future holiday classic comes down to whether or not Netflix allows it to have a life outside of Netflix. Yet even if it does, it’ll be hampered by its TV-MA rating. The only thing it does to earn the rating is swear a few too many times, which begs the question why? Sure, Netflix loves its mature rated content, but when I think of holiday classics, I don’t think of things with a mature rating. Having said that, the mature rated content that is here is mild, and shouldn’t keep anyone from giving it a shot. It’s a far cry from another Lost in Translation, but it is, nevertheless, an entertaining holiday special with enjoyable songs and celebs sure to warrant the hour long runtime.