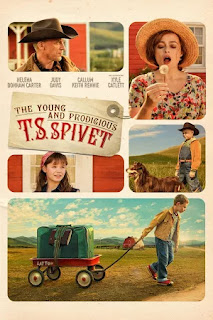 Jean-Pierre Jeunet, the director of Amélie, has had a tough time with this film. He’s just the latest victim of a poor working relationship with Harvey Weinstein. Weinstein buried the film by releasing it in extremely few theaters with no ad campaign or critic reviews simply because Jeunet refused to make the suggested cuts to the film. Whether those would have helped or not is anyone’s guess, but it was an unnecessarily cruel fate for the latest film from a well respected filmmaker. Nevertheless, the film is available on VOD, and while it has its merits, it’s an uneven film that may have struggled for success even if not for the distributor’s cruelty.

"Spivet" plays a bit like a non-holiday related, road film version of “Home Alone,” without the two goons to endlessly antagonize (though he does outwit one train station worker and a police officer). The similarities involve a 10 year old too clever for his own good, and an outsider in his own family. In fact, he’s so underappreciated and mistreated in his hometown that it’s hard not to root for him to leave for greener pastures.

Early on we’re introduced to his farm owning family living in Montana along the continental divide. T.S. (Kyle Catlett) and his fun loving twin brother Layton (Jakob Davies) enjoy their free time the way any child would, except that one of them is an aspiring inventor who sneaks into a college science class to stoke an interest not satisfied on the ranch. The professor talks of the great mystery of perpetual motion and how it has yet to be solved. He predicts that one day a great modern thinker will come along and join the history books alongside names like Leonardo Da Vinci for having devised a solution. After all the cynical college students leave the room, the boy approaches the professor and claims to be that great thinker. While the professor brushes him off, T.S. would eventually prove it with his invention of the magnetic wheel (even if this early moment of doubt isn't paid off at all later).

Layton is clearly more like his quiet, cowboy father, a personality type T.S. has nothing in common with. His sister, Gracie (Niamh Wilson), is a perpetually agitated youth and aspiring actress, whose life revolves around the latest celebrity news and beauty pageants. As you might expect, T.S. finds little to connect with in her as well. He clearly gets his smarts from his scientist mother (Helena Bonham Carter), who spends much of her time obsessing over the morphology of beetles and other insects. He could possibly connect with her if she wasn’t too busy to notice him most of the time.

T.S. is made to endure a near comical amount of disrespect and disregard from his family and teachers alike. His tough, emotionally distant father ignores his suggestions. And his school teacher bullies him and refuses to acknowledge his genius out of a misplaced sense of jealousy. There’s something of a notably ironic superiority complex with this contrived character that feels more like a 50’s cartoon villain rather than a realistic portrayal of modern adults. That might have been fine if the scene were meant to be an interpretation of reality as seen by the whimsical mind of T.S. Spivet like so many other moments. However, that’s not the case. This scene is just an example of the uneven storytelling.

It’s not a spoiler to say, but early on in the film T.S. suffers the loss of his brother Layton. He accidentally shot himself during one of T.S.’s experiments, which leads to the sense of guilt that drives T.S. throughout the rest of the film. It leads him to accept an invitation to make a speech at the Smithsonian for his invention of the magnetic wheel. However, little does anyone know that T.S. is such a young child. And for a large portion of his journey we wonder whether his family has even noticed his absence.

There are subtle bits of humor scattered throughout, particularly in the more fun loving first half of the film. One early scene listens to the young narrator describing the scene we’re witnessing. He describes how he and his sister work on the porch shucking corn, but as the camera zooms closer we see the angry look on his sister’s face as she does all the shucking. She stares bullets at him as he draws pictures of her doing the work rather than contributing to the effort. Well executed smaller moments like this are certainly welcome, but they begin to fade into the background once the emotional journey sets in.

Jeunet’s art is in the production design and methods of visualizing the many thoughts and ideas discussed in the film. In fact at one point the film ventures inside Gracie’s head not terribly dissimilar from Pixar’s “Inside Out.” The rest of his art is in the copious amounts of self aware narration that frequently ends in a character speaking directly to the camera to add to or correct the information the narrator just finished explaining.

Between the subject matter of a bright young man too smart for his own good, the peculiar family the film’s earlier portion is so fascinated with, and the particular visual style, at least half of this film bares more than a passing resemblance to a Wes Anderson film. Yet Jean-Pierre Jeunet, best known for his astoundingly beautiful 2001 film Amélie, adds his own flourishes that grant it a sense of originality.

Newcomer Kyle Catlett does a surprisingly good, albeit inconsistent, job of pulling off his wide ranging emotions. Not every moment hits, but it’s far more hit than miss. Yet the film’s unevenness is due to several other, more glaring factors. The tone is often at odds with itself due to its fascination with its more whimsical stylistic flourishes despite its often more dour subject matter. The overall pace of the film ranges from fast and fun loving to deliberately slow and ponderous. Worse yet, the characteristics the film builds its characters on, namely emotionally distant and non-communicative, creates another problem that the script does a poor job resolving. These characters simply aren’t likable. While T.S. is easily the film’s most likable character, Jeunet does little to make a convincing case for anyone else. It makes the film’s last few scenes feel particularly out of context. He shoots for a 180 for them, particularly the father, that feels inconsistent with everything that comes before it. The worst sin, however, is that T.S. chasing his McGuffin fails to relate in any way to his struggle to cope with his brother’s loss. It’s a fact that’s made all the more confusing when they’re unabashedly tossed together for the duration of the film.

The first half is enjoyable enough, but the more emotional latter half isn’t particularly satisfying. Yet, even if I didn’t connect with this film, I don’t believe it should have suffered the fate that Weinstein sentenced it to. Even if he had some valuable input that could have fixed some of the film’s flaws, squashing it because the director wanted to stick to his original vision doesn’t seem like the answer either. There’s an irony worth noting here that the film happens to be about a visionary being stifled by those who don’t believe in him. Sometimes truth is stranger than fiction.

As a sidenote: The trailer for this film uses music from the film "Cloud Atlas," and one pivotal scene in the movie uses music from "Mass Effect 3." While trailers borrowing music from other films is common place, I can't think of a single instance in which I've noticed a video game soundtrack being used in a feature film. Perhaps that's why I couldn't connect with the scene. It felt distracting and out of place. As much as I love the music from the "Mass Effect" series, it doesn't really belong in a film like this.
Posted by Zach Owens
Email ThisBlogThis!Share to TwitterShare to FacebookShare to Pinterest
Labels: 2, 2015, adventure, based on a novel, drama, indie