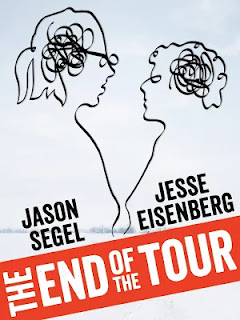 This is a film about the late David Foster Wallace (Jason Segel), and the five days he spent with Rolling Stone writer David Lipsky (Jesse Eisenberg) being interviewed while on tour for his book Infinite Jest. I am, admittedly, regretfully, not as familiar as I would like to be with David Foster Wallace and his work. Nevertheless, this is an enjoyable, even moving film whether you know these people well or not.

It begins with Lipsky convincing his superiors at Rolling Stone that he should be allowed to follow and interview Wallace during his book tour and their awkward initial interactions. To his credit, Jason Segel doesn’t make a caricature of David Foster Wallace. Instead he portrays him endearingly as a man of anxiety, but nevertheless very real. The way he talks about loneliness, the fear of failure, success, and the humility required to deal with success is both inspiring and humbling. He very clearly didn’t want to be the sort of person that wanted to be featured in Rolling Stone, even if he’s exactly the sort of person Rolling Stone would want to feature.

At first they’re feeling out how to interact with one another. While Lipsky tries his best to sound and appear comfortable, Wallace admits how terrified he is by the idea of it. We get the sense, that even though we might be doubtful of their authenticity during their conversations, these characters, nevertheless, feel genuine when expressing their emotions, thoughts, fears, or desires. Lipsky so clearly looks up to Wallace and wants the success he’s found that we can’t help wondering how many of his inquiries are made in an attempt to gather useful information about how a successful writer thinks and operates, so he can put it into practice himself. Or maybe it’s strictly for the piece he’s writing. It could be both.

They genuinely feel like they’re slowly become friends, even if at first, it’s an act on both of their parts. These two smart, more importantly lonely, writers connect because they understand each other. But the way two writers may be, they’re competition for each other as well. Lipsky looks up to Wallace, but he also seems to be judging himself based on what he sees in him. Wallace also takes up this bit of one upsmanship. He constantly remarks about how he can’t come up with such a beautiful way of putting something as Lipsky has. It’s said with a tinge of jealousy. Yet he seems to get the last laugh by putting him up for the night in his spare bedroom that also happens to serve as a store room for the stacks of all his novels.

This contest, or one upsmanship, is carried further as Wallace signs books and watches David Lipsky chat with the girls he knows. In particular, Wallace becomes jealous of the fact that one of the girls he had dated in high school seems to be taking an interest in Lipsky. With that mindset, any interaction starts to feel like a flirtatious one. The girls had come to support Wallace, but found Lipsky just as fascinating. Later on that night, however, he returns the disfavor by having an extended chat on the phone with Lipsky's girlfriend, who happens to be all too fascinated by Wallace. The evening ends with Lipsky jealously scolding his girlfriend for chatting with him for so long. Yet this also leads to another scene in which Lipsky, perhaps unconsciously, flirts with one of the girls, yet again, while asking for her email address (for business purposes, of course). Wallace jealously pleads with him to stay away from her. This one upsmanship finally leads to an awkward "break up" of sorts that works in the semi-bromantic comedy structure the film seems to be set in. Their breakup feels like a real one even though Lipsky is supposed to be acting professionally not emotionally. But then again, Lipsky’s fascination with Wallace demands an emotional response.

"The more people think you're great, actually the bigger the fear of being a fraud is."

They find a way to get past this awkwardness, of course. It allows them to get back to more personal conversation. The way they talk about life, happiness, and writing is the stuff of good literature that rarely translates so well to screen. As if some sort of sign, their first names are the same. Lipsky clearly wishes he had whatever success Wallace has found, even if he knows Wallace has a very love/hate relationship with it. Like a little brother, Lipsky looks up to him and respects him, making Wallace's warning later in the film all the more poignant.

"I'm not so sure you want to be me." He tells him. Though the explanation from Lipsky later in the film seems unnecessary. He explains that Wallace has what he wants, and Wallace wishes he didn’t have it. The entire film is about this, but Ponsoldt and screenwriter Donald Margulies nevertheless felt the need to state it. It's a rather small gripe in an otherwise beautiful film.

The insightful evaluation of success, and what it really means to the people who are successful is a fascinating subject, and this film ponders it in deep conversation. It does so as well as any Richard Linklater film that spends its time contemplating deeper themes of life, loneliness, happiness and the American dream. There's something to be said that at an hour and forty six minutes I could easily have spent far more time watching them interact. We get the sense that it’s the same for them as well. Rarely is two people conversing on screen so compelling. And as for James Ponsoldt, between this film and his 2013 film "The Spectacular Now," he's becoming a director to keep a close eye on.

Posted by Zach Owens
Email ThisBlogThis!Share to TwitterShare to FacebookShare to Pinterest
Labels: 2015, 4.5, based on a true story, Book, drama, road movie