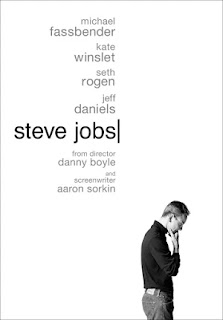 The cinematic dramatization of the “Steve Jobs” biography by Walter Isaacson was many things at one time. It was originally a Sony project, but they couldn’t afford to take a loss on the film even if it was well made and well reviewed. However, after a string of box office successes (in the “Fast and Furious” series, “Despicable Me 2,” “Minions” and “Jurassic World”) Universal could afford the potential box office disappointment, so they bought the rights. To their credit, Sony foresaw the poor box office numbers the film is now suffering from. Leonardo DiCaprio and Christian Bale were originally considered for the role of Jobs. Frankly either one would have looked more like Jobs than Michael Fassbender, who would eventually take on the role. And instead of reteaming screenwriter Aaron Sorkin with director David Fincher, whose 2010 collaboration “The Social Network” captured lightning in a bottle, they went with another well liked arthouse director in Danny Boyle.

Boyle, has done his fair share of directing for the stage. Perhaps then, its no surprise that “Steve Jobs” plays like a three act stage play with three primary sets. It’s peculiarly sparse of the details of Jobs’ life and work, as if they assume the audience is already aware of much of Jobs’ story. The strategy by Sorkin, was rather to avoid biting off more than they could chew, a flaw we see all to often in biopics that attempt to cover an entire lifetime in a two hour runtime.

“It’s like five minutes before every launch, everyone goes to a bar, gets drunk, and tells me what they really think of me.”

That's precisely what happens in “Steve Jobs.” Sorkin has referred to this film as a painting rather than a photograph. As if to say don’t mind the inaccuracies, it’s an interpretation of a less publicized part of Job’s life. While the time frame and specifics aren’t to scale, so to speak, it frames a lot of conversations Jobs really had amidst preparations for three product launches: 1984’s Macintosh, 1988’s NeXTcube (after Jobs was fired from Apple), and 1998’s iMac (after Jobs returned to Apple). It’s a unique structure and a clever bit of fictionalization to compress time. Instead of actually showing any of the product launches, which we already know about, Sorkin and Boyle focus on Jobs’ life behind the scenes.

And behind the scenes the film becomes essentially a tale of family. The recurring characters in this film are essentially his surrogate family. Joanna Hoffman (Kate Winslet), his marketing executive, serves essentially as his personal assistant, but feels more like his mother and conscience. Steve Wozniak (Seth Rogen) and Andy Hertzfeld (Michael Stuhlbarg) are like his younger brothers struggling to get out from under his enormous shadow while he pushes them to meet his high expectations. And John Sculley (Jeff Daniels) is like his father and mentor in the earlier portion of the film and a rival in the latter portion of the film with whom there still seems to be some semblance of respect. "What we could have made together," they ponder after Jobs had rejoined Apple and Sculley had departed. 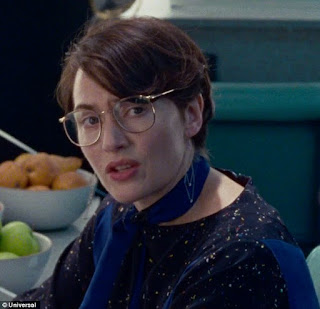 Seth Rogen gives a good performance that proves he’s capable of delivering more than broad comedy, but his moments during the three segments tend to repeat themselves. He is the little brother who Steve looks out for, but the pain of their relationship is that Steve won’t give him the validation he desires. More impressive is Stuhlbarg as Andy Hertzfeld (there is repeated comedy behind trying to keep straight all the people on the team with the name Andy). His interactions with Jobs contain some of the best bits of dialogue the film has to offer. Still more impressive, however, is Jeff Daniels as John Sculley and Kate Winslet as Joanna Hoffman. There’s a strong case for both of these actors to receive nominations for best supporting actor or actress respectively.

Sculley frequently asks Jobs about how he was adopted, and eventually Jobs reflects that his first set of adoptive parents rejected him. It’s used as both evidence of his desire for control over every aspect of his business and its products, and his unwillingness to claim young Lisa Brennan (played by three different actresses). His parents didn’t want him, so he doesn’t want to be a parent. Yet it’s the relationship between Jobs and Lisa that becomes the main driving force of the film.

“Reality Distortion Field” is a concept consistently brought up when talking about Steve Jobs (and explained in detail in Isaacson’s "Steve Jobs" biography). Steve Jobs had a way of seeing only what he wanted to see, when he wanted to see it, and he was consistently able to convince himself, and those he worked with, of whatever it was he wanted to see. Living within his own reality distortion field is the only way to explain the irony of a brilliant businessman who could design tech to make our lives easier and market it for the masses, yet be so cold to everyone he knew, especially his own daughter. The film does allow a sense that he cares for her, but he doesn’t know how to show it, nor is he sure whether or not he wants to.

While Aaron Sorkin’s fast paced, quick witted, often stinging dialogue may be the star of this talky film, Danny Boyle’s ability to shoot it with an energy that feels much like an action film is deserving of just as much credit. Walter Isaacson’s biography explained how Jobs learned his love of fine craftsmanship from his father, who was a carpenter. It’s important, his father had instructed, to craft even the backs of cabinets properly, even though they are hidden out of sight. It lead Jobs to demand fine craftsmanship over every detail of his products, even the components inside the computers, though they were completely hidden. To an extent that’s the approach Boyle took in his visualization of the story. He shot each segment of the film in a different format to portray the advancement of technology from 1984 to 1998. That technological advancement coincides with a sense of personal growth and mellowing of Jobs’ harsh personality. Yet the most frenetic, scene of the film is the one leading up to the 1988 launch of the NeXTcube. It involves the loudest conversation and the most cross-cutting as two argumentative conversations both between Jobs and Sculley take place at different times. These frequent flashbacks to times we hadn’t witnessed up to that point are a clever way to fill in the gaps in time we’ve skipped over.

Yet Boyle’s stylistic flourishes are a bit of a mixed bag. At times they’re great, like the quick flashes of Lisa while Jobs is clearly thinking about her. It's the way the human mind works. Sometimes we can't get an image out of our heads. We see them in quick flashes and can't seem to force them out. But Boyle’s other flourishes are more distracting, like when a quote appears in written form on the floor next to Jobs as he speaks to someone backstage, or when the walls of a hallway light up with images of a rocket taking off during an otherwise low key conversation. These serve little purpose other than to spice up a talky, otherwise visually uninteresting scene. However it comes off as desperate and distracting rather than artistic. 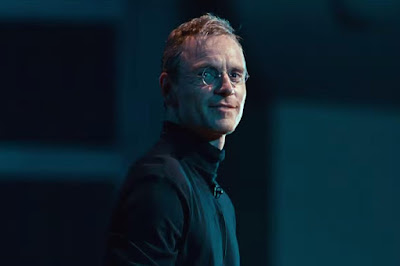 The film does assume that we already know much of the facts of Jobs’ life and the products he launched whether by Isaacson’s biography or the copious amounts of coverage the media gave Jobs both during his life and after. As such, it skips many of these details. The years between the product launches are told in brief montages with voice-overs from reporters reading the latest Apple and Steve Jobs related news. The final product launch has Fassbender finally looking like Jobs rather than Michael Fassbender, and shows him at his most mellow. He went from his most abrasive in the first segment to finally relatable, and dare I say, “likable.” His reformation, if you can call it that, is entirely tied to his relationship with his daughter. Yet the way the film leaves things, with rapturous applause, catchy music, bright lights and smiles feels quite at odds with most of the rest of the film. The upbeat, hopeful moment feels neither earned nor in keeping with the tone of the film up to that point.

Sorkin’s script neither purposefully villainizes or praises Jobs. He was a visionary that will be talked about in history books alongside other culturally significant figures of the modern age. Nevertheless he was a tough person to be around, and a harder person to work for. Sorkin’s other techy biopic “The Social Network” showed us a driven man with a plan to better connect the world. Steve Jobs similarly revolutionized home and mobile computing to better connect us with friends and family. The fascinating thing that they have in common, and that Sorkin focused on, was their struggle, or inability, or unwillingness to connect in their own personal life. The script is well written, it’s well performed, and its well directed. It never hits a higher point than Jobs’ revelation that he is “poorly made.” This film is anything but.