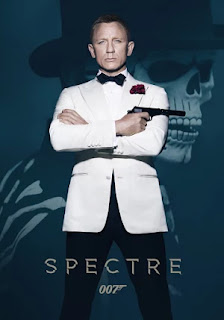 To his credit Daniel Craig is more the brutal weapon that Fleming imagined than any past Bond. His (and the writer’s) take has been an attempt to make him more human than any previous Bond as well. Yet his cold, straight faced performance has left little to connect with. His take on the character lacks the charm, the one liners, and the cleverness to outwit his opponents that endeared past Bonds to audiences for years. And now he's so tired of doing the series that he wants out after 4 films despite being contacted for 5. Director Sam Mendes is in a similar place, yet I can’t help feeling that’s for the better. I wasn’t in love with “Skyfall” the way most critics are, and while I’m always excited for any Bond film, I had my trepidations about this film considering it’s coming from the same director and writing team. Critics seem to dismiss this film due to the fact that it isn’t another “Skyfall,” but I find that a credit to the film because it feels more like the Bond formula of old. However, they’re not wrong that it’s a missed opportunity. Yet its issues lie elsewhere.

With these rebooted Bond films they seem to be trying to walk a tightrope between pushing the series into new territory while reviving relics of Bond franchise past. Yet pushing the series into new territory while forcing themselves to a place where the series resembles what it formerly was is a bit of a contradiction that has, to me, left the series in a strange place. The darker exploration of Bond’s past (something no previous Bond film ever cared to do, or felt like it needed) with villains that would rather target Bond personally (a la the Joker in “The Dark Knight”) than pursue grander schemes involving world domination are broken up by moments that say, “hey, remember this character, or the old 60’s Aston Martin?” This rebooted series clinging to the old car, for example, continues to feel more and more like forced fanservice attempting to say, “see, even though this series feels different, it’s still Bond, right?” As if this sort of thing replaces the need for the formula that made Bond films what they were.

“Skyfall” was a grim, somber mixture of “Bourne” and “Batman,” with an ending that channeled “Home Alone,” that didn't feel like a Bond film. Here they do a better job of capturing the old formula and the result is a far more fun film than “Skyfall.” That doesn’t, however, make it a less flawed film. There are welcome doses of humor injected now and then that help, but they’re few and far between. They do lighten the mood when they're allowed, but this is still the dark moody tone established in “Skyfall.”

There are two sides to the plot of “Spectre” one involving Bond’s investigation of the title group and one involving MI6’s battle for relevance against the modernizing world of secret intelligence. Yet this unimaginative story mirrors the latest “Mission Impossible” to a fault. MI6 is looked down on as an old fashioned entity that no longer seems appropriate or necessary for modern espionage. Bond's methods are called into question considering the devastation that follows him. No one believes in Bond's mission which requires him to continue in secret without permission (he should meet Ethan Hunt, they’d have a lot to talk about). For him it's personal. The villain made him a target, making his mission as much revenge as anything else.

The script points out the flaws, or perhaps inefficiency, of old fashioned spy tactics. Things can be done far easier by tuning into cameras and microphones planted around the world, but not without the moral quandary of invasion of privacy. This relatively boring non physical attack on MI6 drags down the otherwise well paced investigation by Bond and his newfound cohort Madeleine Swann (Léa Seydoux). Craig and Seydoux have great chemistry throughout, and their characters develop a nice rapport over the course of the film. Though I won’t spoil how they come to meet or why. Their cooperation in investigating Spectre has them traveling by train in one of the film’s better sequences that channels “From Russia with Love,” and involves one of the series better, more brutal fight sequences. However, the film, to an extent, hinges on their supposed love story, that neither the performances or the writing makes as believable as the one found in “Casino Royale” (which continues to be the best of the bunch).

Before the Craig era, Bond had always been able to outsmart his opponent, typically with help from Q's spy tech that just so happened to anticipate his specific needs given the situation he would find himself in later. He had a knack for getting himself captured (intentionally or not), but could think his way out of any situation, usually with a clever witticism made to infuriate the villain. Where are the wisecracking moments where he steps on Goldfinger’s golf ball to hide it from view, thus frustrating his attempts to cheat? Or when he catches Goldfinger cheating at cards in an earlier scene, and he’s able to charm the girl away from her post allowing Goldfinger to lose. Or even the moment in “Casino Royale” where he laughs and jokes with his torturer thus infuriating the attempts to tear him down. The best Bond films are the ones in which Bond matches wits with an intellectual villain, and his ability to antagonize that villain is part of what makes him so cool. The villain begins to fear Bond as an unstoppable wrecking ball they can't seem to outsmart. No such defiantly witty hero exists in this latest entry into the Bond franchise. He is Bond, in name alone.

Instead he is continually the one outsmarted and forced to rely on a mixture of brute strength and luck to complete his goals. That manner of luck leads to a series of anticlimactic escapes that seem to ignore the information the script so clearly stopped to tell us just minutes before. During a torture scene it’s said that damage to a specific part of the head will cause memory loss and inability to walk, except when it doesn't because Bond is Bond, and it’s time to escape so we can move on to the next scene. Or there's only a certain amount of time to escape and save a captive before an explosion will claim both their lives. Except that he has no trouble whatsoever strolling out with time to spare. It isn't just lacking in originality, it's lacking thrills.

Yet that's not even the worst of it. Their attempts to bring the franchise back to its roots by slowly establishing the character of Bond and MI6 with a new M, Q and Moneypenny are admirable, but the execution has been off. The new M doesn't have the rapport with Bond that the old one did, and the new Q doesn't bring the tech or comedic charm of the classic Q. 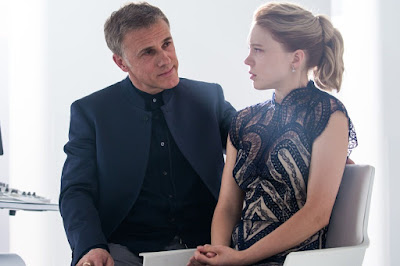 And as for the villains, the unique and dangerous henchmen of the past have yet to return. Though Dave Bautista's Hinx is the closest equivalent yet. At first he seems like a new take on Jaws. A large, mostly silent man who Bond would be overmatched against in a one on one fight. Rather than steel teeth, he has long sharp thumbnails that he uses to gouge out his victim's eyes. Though he’s relatively plain looking rather than the near caricatures that faced off against Bond in past films. And Christoph Waltz's Oberhauser is a poor use of such a great actor. The slow introduction to him doesn't reveal a villain that lives up to expectation. That introduction shows a villainous criminal organization that fears him for no specific reason. He doesn’t have very many scenes and his plan lacks any specific threat. His plan, whatever it is, does however lead to a sequence inside the bombed out shell of old MI6 headquarters. It’s been converted into a haunted house of sorts, full of pictures of friends and foes now deceased due to the clash of these organizations.

The other line of action doesn’t add much intrigue to the proceedings either. It involves the aforementioned modern take on espionage that wants to put MI6 out of business. The head of that effort is a man referred to as C, played with minimal effort by Andrew Scott. Scott feels as wasted as Waltz, in a role that doesn’t take advantage of his skills. His take on Moriarty in “Sherlock” is the best ever put on screen and shows what unique skills Scott brings to the table. C, however, is a forgettable character that the film spends very little time with, and Scott is given very little to do with those few moments.

And while the Bond song is a trivial matter, it’s worth mentioning that Sam Smith’s “Writing’s on the wall” is subjectively the worst the franchise has ever produced. And it has little if anything to do with where this film is heading.

Perhaps the ultimate reason this film feels like a disappointment comes down to the fact that the Craig era Bond films have been leading up to this from the start. All the previous villains, and references to a larger threat have set the stage for this film. It is, after all, titled after the group that Bond has been so earnestly chasing. Yet this film doesn’t deliver on the expectations that go with such an extended build up. The film’s best sequence is the opening in which one long unbroken take follows Bond around through the day of the dead festival in Mexico City. It’s a sequence inspired by Orson Welles’ spectacular opening to “Touch of Evil.” But the fact that this opening is the most talked about portion of the film is also a telling one. It does have some solid action sequences here and there, but most of them tend to fizzle out as if they ran out of time trying to think of a better way to end them. That theory would seem to check out with the knowledge that the now infamous Sony hack allowed the script to be leaked online forcing rewrites during the shooting of the film. Craig’s Bond started “Casino Royale” a young gun in need of proving himself. Now, a couple of films later, just as they've gotten to a place where the formula is starting to resemble the series of old, they’ve written him as the old veteran at the end of his career. With Craig wanting out, it would seem the writers tried to force an ending that would allow his departure if indeed it comes to that. The best way to describe “Spectre” is anticlimactic. And that’s a shame after starting with such great momentum.