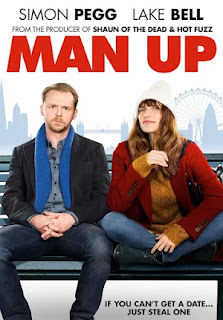 
From the outset “Man Up” is your typical screwball romantic comedy. Done many times over, it’s surprising a film with these tired tropes can be green lighted again and again. And you might have tuned out on this film early on if the leads weren’t genuinely charming. Lake Bell and Simon Pegg have surprisingly strong chemistry even from their first moments together. And rather than sticking to their tired tropes, there’s a good portion of this film that has fun purposely setting up those tropes only to try to subvert them.

Lake Bell, who maintains a consistently convincing British accent, plays Nancy a socially awkward, perpetually cynical, introverted 30 something struggling to engage with life and find the man she's supposed to be with. The film opens on a tropical themed party scene that she's hiding in her room attempting to avoid. After sprucing herself up and practicing pick up lines in the mirror she settles into her hotel bed to watch "The Silence of the Lambs," both a movie she knows by heart, and one that is sure to kill any excitement for romance.
Nevertheless, head to the party she does. She meets an equally socially awkward man meant to be her blind date for the evening. But her real trouble isn’t just that she’s awkward, it's that she can’t seem to keep from saying the wrong thing at the wrong time. Yet their failed connection leads to willingness to give another connection a shot. While on a train she chats with a young woman toting a book she claims will help identify her to her soon to be blind date. But when she leaves it on the train, Nancy finds herself trying to track her down to return it until she inadvertently runs into the blind date the young woman was supposed to meet.

This meet cute is comical not just because of how awkward she is while she decides whether or not to go for it, but because of how eager Pegg’s Jack is in his attempts to break the ice. He's clearly far more charming than anyone she’s met previously, and it's not hard to see why someone in her shoes would opt for adventure with him rather than honesty. Initially they connect by quoting movie lines and pretending they care about this book that neither of them has actually read. She’d feel bad about continuing the lie, taking on the personality of the person he thinks he’s with, but it’s clear he’s not been completely honest either. Yet most of his lies are generally the smaller white lies you tell on a first date in order to be personable.

Also to their credit, rather than stringing the lies along throughout the film, expectation is subverted as the lies are exposed far earlier than expected. It's a move that allows the film to break from the tired tropes the film was built on in order to find something more unique. Tess Morris’ script is genuinely charming and surprisingly funny. It helps when performers like Pegg and Bell continually find ways to elevate that script. In fact, the truth coming out frees them to finally be themselves around each other, and this more honest, middle portion is the best the film has to offer.

Jack is a 40 something getting over a divorce, and looking to get back into the dating game. He's not quite over his painful breakup, but it's nothing Nancy can't help in her own cynical way. Her help becomes all the more important when they inadvertently explore his past, including a relationship that ended painfully.

Sure the story, to an extent, comes down to typical sappy romcom tropes, but it is, nevertheless a worthwhile effort due to the performances by Lake Bell and Simon Pegg. There is an equal mix of eye rolling tropes, and genuinely comical moments amidst the strong performances. Nevertheless this is a pleasant surprise for a romcom, and likely one of the best of 2015.