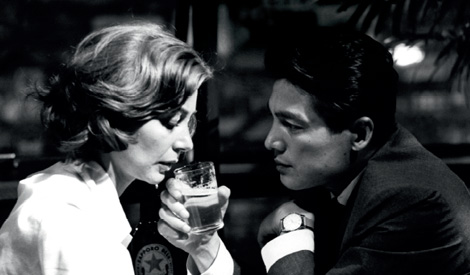 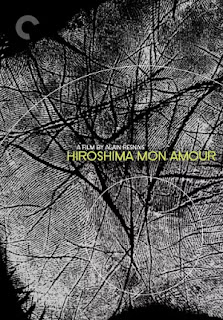 Before Richard Linklater made his widely loved tale of romance abroad over the course of a single night in his 1995 film "Before Sunrise," Resnais' "Hiroshima Mon Amour" told a similar story that no doubt served as Linklater's (among many filmmakers) inspiration. Both films involve lengthy discussions of thoughts, and past experiences.

While Linklater's film deals more in the pure joy of newfound love, Resnais' film deals more in the regret of lost love. Much like Wong Kar Wai's filmography (another director whose inspirations lie within the French New Wave) Resnais' tale is primarily about longing, and the city it takes place in is as important to the story as any other detail.

It begins with a sobering set of flashbacks remembering the pain and the toll taken on the surviving people of Hiroshima due to the bombs that leveled the city and ended the war. These images are contrasted with closeups of a lovers embrace, as her (Emmanuelle Riva) narration continues. He (Eiji Okada) might contradict her, but he always has open ears for her. It's a poetic anti-atomic war opening that extends into later scenes as well. One in particular shows a parade of sorts, meant as a strike against atomic warfare that's being filmed for a scene in the movie she's in Hiroshima to shoot.

They kill the hours they have remaining together with discussion of memory and it's fading over time. Early on, he asks her what Hiroshima meant to her while she was in France. She replies, that it meant the end of the war completely. Her reflection on the matter brings an ever so slight surprise that anyone had dared to do it, and further that in the time since she'd grown indifferent. Yet that is not without a fear of that indifference, and concern that such indifference leads to a lack of memory. This discussion of the war, its destructive end, and the fear of indifference is reflected in their discussion of her first love.

She painfully shares the memory she had held so tightly under wraps previously, as if finally opening herself up to someone for the first time since. The walls have come down. This was a story that either he had earned, or she trusted him with because of their brief time together. Surely, he assumes the first, which explains his joy when she admits that not even her husband knew the story. She explains that though she's married (as is he), this isn't her first love affair. The first ended with her being shamed in her hometown of Nevers, France for having fallen in love with a German soldier during the occupation. As the occupation was ending, the German soldier was shot and killed. Nevertheless, her love affair with him caused embarrassment for her family. Her head was shaved, which is a clear comparison to the war's affect on the citizens of Hiroshima whose hair had fallen out due to the radiation. She was punished by her own family to spend time locked in a cellar that would hopefully cure her of her love for the now deceased German soldier.

The large middle portion of the film is her setting free this painful story. Later the conversation turns to the fact that years apart from past experiences cause indifference to their fading memories. While that can be good for painful memories, it's their newfound love they fear the prospect of forgetting. The fact is made all the more poignant by her inevitable departure and his pleas for her to stay.

"I'll remember you as the symbol of love's forgetfulness. I'll think of this story as the horror of forgetting."


For many this film was not just one of the films that kicked off the French New Wave, it was also the beginning of what's being called the cinema of memory. It's known for its fascinating cutting back and forth between the lovers lost in their conversation, and flashbacks to the memories they're sharing. These memories are full of regret, while the painful sharing of them opens them to finding new love in each other's arms. She's afraid to allow herself to stay with him, despite his pleas. The memories themselves are reason enough for her reservations. It leads to further discussion of the fact that years from now the memory of their brief affair will likely fade.

Resnais himself explained that the film is inspired by the classic film "Casablanca," which features a love affair not fated to last in the midst of a distant war. "Casablanca," of course, takes place largely in Rick's cafe, and one of the final scenes in "Hiroshima Mon Amour" takes place in a cafe called "The Casablanca."


"It's still the same old story. A fight for love and glory. A case of do or die. The world will always welcome lovers. As time goes by."

There's a lot of innovation on display here by director Alan Resnais. He shows the world the terrible affect on humanity that atomic war has in an age more familiar with propaganda films made to glamorize war. He tells the story of a love affair between a mixed race couple, and does so in a film that cleverly uses large amounts of flashbacks to examine painful memories of previous lost loves in a war rattled world. He spends as much time admiring the beautiful resilient city of Hiroshima as he does the couple dreading the last time they'll see each other.

It's a landmark film that is a poignant reminder of the absolutes of war and death contrasted with the fleeting nature of love and memory. It's exquisite style also paved the way for a new modern way of making films that we can still see on display anytime we head out to the theater.