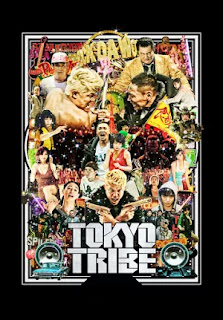 “Tokyo Tribe” is Sion Sono’s bizarre, campy, oltherwordly rap musical (based on a manga series) that documents a tribe war taking place overnight. Pandemonium reigns in the rainey back alleys of a fictionalized Tokyo where civilization has broken down into tribes who control the various special wards. Crime is everywhere, and morals and values have fallen by the wayside. Drugs are sold even under the watchful eyes of the police without fear.

It opens like a music video as one character raps an intro to the world we’re entering. Sono navigates the rain soaked alleys with beautiful sweeping crane and dolly shots. A female police officer wearing an almost intentionally immodest uniform gets herself into trouble by being the only one of the officers willing to try to stop the drugs from being sold. Yet she immediately becomes a victim of sexual harassment at knife point while the assailant explains the territorial tribes that have taken over the cities of Japan. Her fellow police officers laugh while watching it happen, but the film soon moves on and completely forgets that any of this happened.

The tribes include Shibuya Saru, Shinjuku Hands who happen to be welcoming a new boss who dresses in Samurai armor; then there’s the Gira Gira Girls of Kabukicho; the track suit wearing Nerima tribe, and the peace loving Musashino tribe. They are each given a brief rap intro in which they get to thump their chest while stating their tribe’s name and warn that trespassers will either have to join them or be beaten, or likely both. Musashino is the only place where there’s a sense of relative safety. That is until a couple of men from their tribe inadvertently trespass on the final tribe’s territory.

The Bukuro Ru-Ronz tribe is lead by Buppa, a sex crazed lunatic who may just be the most dangerous of them all. Riki Takeuchi plays him in the most over the top, bizarrely campy manner possible in an attempt at comedy that feels nearly out of place if it weren’t for the fact that Sono adopts an anything goes mentality.

Buppa’s tribe controls a popular whore house, which leads to the aforementioned inadvertent trespassing. A group of guys from Musashino head there looking for prostitutes unaware that it’s on Buppa’s property. As you might expect a fight breaks out and it marks the beginning of the tribe war. But in case this tale of numerous tribes each vying for power wasn’t enough, there’s also a subplot involving an otherwordly High Priest who is searching for his runaway daughter. He commissions Buppa to take control over all of Tokyo in order to find her.

In the meantime we’re introduced to Buppa’s peculiar sons Nkoi and Mera. Nkoi lives in a red room filled with his personal slaves who he has painted white and uses as furniture. Mera is a muscle bound, blonde haired swordsman whose obsession involves killing anyone who might have larger genitalia than he does. Yet these peculiar characters are just the tip of the iceberg. After all the introductions are made this circus only gets stranger. There are crazy hairdos, phones shaped like guns, an old lady wearing sunglasses in the dark who never leaves her turntable, and scantily clad women operating what is probably the worst CGI tank I’ve ever seen.

One of Buppa's recently acquired prostitutes, Sunmi (Nana Seino), and her young martial artist protector manage to escape captivity and join the Musashino Tribe. They find a common interest in escaping Buppa and his black hoodie wearing Waru fighters. As these fighters attack more and more of the tribes they all begin to find shared interest in taking down Buppa and his tribe.

However, to ensure that Buppa and his men complete their given task, the High Priest sends two of his superhuman Knights from Wong Kong (an obvious play on Hong Kong) to contribute to the search. However they can’t seem to tell friend from foe. They fight the tribes and Buppa’s Waru fighters indiscriminately. It seems a nonsensical lapse in scripting that allowed the Knights to be present while the High Priest commissioned Buppa to search for his daughter, yet moments later they’re all fighting each other as if they didn’t just agree to work together.

Nevertheless, the bigger problem amidst all this madness is that Sono barely manages to compile a coherent set of events. Like most music videos it cuts from one visually unique set piece to another in ways that rarely make narrative sense. Worse yet, it has very little if any respect for its female characters. Almost all of them are treated as property to be exploited for sexual purposes at any time, and strangely enough, most of them seem to relish this demeaning role. It isn't as though there aren't strong females. The Gira Gira Girls hold their own in the fighting as does Sunmi, even if she's willingly objectified in an earlier scenes in the film. Sure it's a lawless world, but the women didn't have to be so accepting of their treatment, especially if the film does this little to redeem them later on.

There’s so many different set pieces, that while filled with vibrant colors, tend to start looking similar enough that it can be hard to know where each scene is taking place. And that extends to the vast array of tribes and characters. While most of the leaders have unique looks, the rest of the film’s enormous cast is easily forgettable. Worse yet, characters seem to pop in and out, often disappearing without explanation. It becomes all too easy to lose track of who is supposed to be a significant character and who isn’t, especially when the Musashino tribe’s leader becomes something of a lead character much too late in the film.

The fight sequences and special effects are something of a mixed bag. Some are well done and interestingly choreographed, but others are not ("The Raid" this is not). One particular character we root against is given a gruesome but anticlimactic death scene that seems to come out of nowhere. And the CGI bits would have looked bad even for the early 90's, but they're laughable in 2015 (whether that was the point or not I can't be sure).

I won't say there isn't a fun novelty to the fact that this is the world's first battle rap musical, and Sono certainly gives it a unique visual flair. There's also something to admire about the various groups finding common ground and working together. While a shared interest in defending their separate turf brings them all together, a shared love of music will sustain their newfound friendship. It's just a shame that it all isn't enough to sustain this movie.

Sion Sono is a director with peculiar sensibilities. His 2005 film "Noriko's Dinner Table" was a stylish, inventive, and finely crafted metaphorical drama. His 2013 film “Why Don’t You Play In Hell?” was strange but comical and certainly entertaining. It came off the rails in its final climactic scene, but was nevertheless a mostly enjoyable film. “Tokyo Tribe” however, is a convoluted mess of a film that goes off the rails early on and never finds its way back.