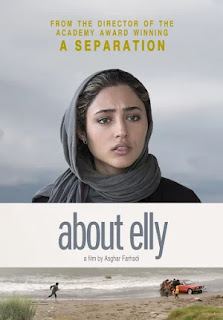 While enjoying a relaxing stay at a villa on the beach, a group of friends are broken down while trying to cope with the disappearance of Elly (Taraneh Alidoosti), the newest friend of the group. These several couples, along with their kids, clearly know each other well. Initially they feel like your average, good-natured, fun loving group of 30-somethings exchanging jokes and letting off steam with games and dancing while on this vacation. But one afternoon, while the parents are playing volleyball on the other side of the villa, one of the younger children alerts them that the eldest boy is drowning.

The next scene is easily the film's most intense as they all desperately dive into the Caspian sea to try to find the child before he drowns. At no point is the scene allowed to slow down. It rivals the tensity of the beach scenes found in "Jaws," which is a compliment to the direction of Farhadi who doesn't have the benefit of a monstrous shark to play on our fears. Yet only as this scene comes to its eventual conclusion does the crux of this film really begin. In all the excitement no one noticed that Elly, who had been the one watching the kids, is nowhere to be found.

She's the school teacher for their kids, and Sepideh (Golshifteh Farahani) had convinced her to come in order to meet the groups only other single member Ahmad (Shahab Hosseini). He had just returned to Iran from Germany after going through a divorce. Sepideh, and the rest of the group, constantly infer that the two are already a couple despite the fact that they've only just met. They push Ahmad to interact with her, especially when she's starting to become standoffish. Worse yet, they make jokes about how they're married or soon to be married. It makes for some genuinely awkward moments, and it's clear that Elly feels uncomfortable in this group dynamic. Yet in order for the trip to happen in the first place, she had to agree to the little white lie that she and Ahmad are newlyweds on a Honeymoon of sorts in order to not draw suspicion from the people they're renting the villa from. It's just one of many lies that comes to light over the course of the film, with each one bringing a new, more devastating revelation. Yet they do, in some ways, cause doubt in their suspicion that she might have died attempting to save the drowning child.

In fact, a large portion of the rest of the film is a heated debate on just what happened. Did she leave, like she had indicated she wanted, or did she drown? Who lied, and about what? It's as much a psychological thriller about who is to blame and what really took place as it is a mystery to be solved. Things only get more complicated when a man claiming to be her brother shows up.

Farhadi, whose background is in theater, lets this film play out much like a stage play. Rarely do we leave the villa once we arrive, and most scenes involve numerous moving parts. The scene in which they first arrive at the villa and debate whether or not to stay is a masterful scene, it's nearly a summation of the film and each relationship as a whole. In retrospect, there are numerous carefully crafted scenes like this that warrant multiple viewings to understand their greater purpose. I suspect there was far more foreshadowing than I caught onto in my first viewing. Suffice it to say, there are certainly more layers to this film than one viewing will reveal. One of the more enduring images the film has to offer is one of the group struggling to push a car out of the beach sand that it's sunk too deep in. It is one of the clever metaphorical images Farhadi leaves us with.

To Farhadi's credit, I can scarcely recall whether or not there were many cuts during the film's many dialogue heavy scenes (there were of course, but they're barely noticeable). They feel like long cuts. The actors commit to their parts and the camera exists, moving in and around them so adeptly that we feel as much a part of these events as any one of the characters. Farhadi gets terrific performances from each of his numerous actors. Even the children hold their characters well. Between the happy-go-lucky opening of the film and the grim, argument fueled latter half, the actors get a good chance to display their range. And deliver they do.

We're left to wonder what it all means, and whether what happened was intentional or not. None of the possibilities are uplifting. However, unlike some reviewers, I refuse to believe that this film is meant to encapsulate Iranian culture for a wide audience. Farhadi has stated that such a thing was not his purpose. He was not attempting to make a statement. We should think of this film more cinematically. And the craft of the filmmaking on display here is something to admire. Farhadi is a talent worthy of taking note. I certainly have.