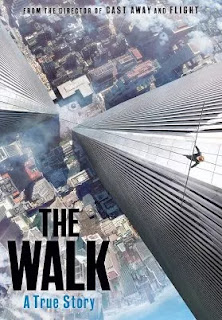 Let's get this out of the way right from the start, because I know it's what you're wondering: the accent... It's really not that bad. In fact, turning on James Marsh's fantastic 2008 documentary "Man on Wire" and listening to the real Philippe Petit you realize that Joseph Gordon-Levitt actually did a good job with it. And as far as accuracy to the true story, the screenplay by Robert Zemeckis and Christopher Browne sticks very close to the story that Philippe Petit laid out in his book "To Reach the Clouds," and in the aforementioned documentary "Man on Wire."

Zemeckis' vision of that story is both beautifully realized and yet somewhat questionable in its method. First off, the visuals are astounding. Early on there's a scene mostly in grayscale (except for a few objects) devoted to Petit's life spent in Paris where he was a street entertainer. From a young age he witnessed in awe the high wire act performed in the circus and devoted himself to becoming an entertainer. These scenes are some of the most fun the film has to offer, but the visuals are never better than they are during the main sequence toward the end of the film.

I call the method questionable because rather than a typical film, Zemeckis outlines the film as a fake documentary with Petit giving an intro directly to the camera. These cutaways pop up now and then throughout the film often taking us away from moments we'd rather not have left. Zemeckis also frequently includes unnecessary voice-overs that serve as documentary style explanations, yet I can't help wondering how much better these moments would have played if not for these voice-overs that felt more distracting than informative. 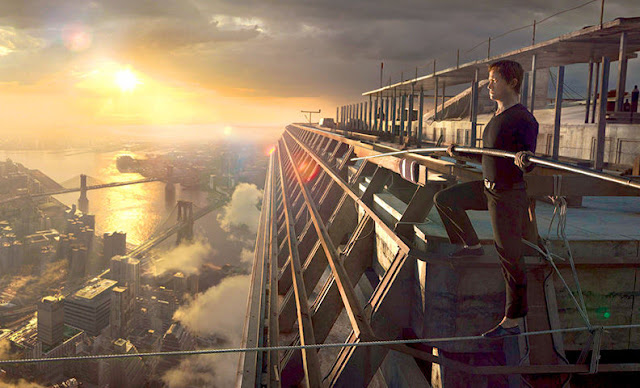 Having seen an article in a magazine about the construction of the two World Trade Center towers, a new dream was born that Petit devoted his life to. Many, no doubt, wonder why he would do such a thing, but if the obvious thrill of such a thing isn't evident, you might be watching the wrong movie. Yet Petit was a performer, and like any actor or stage performer, the dream is to give a big performance on the biggest stage possible. For Petit, that stage was literally that highest stage on the planet. After seeing this film, its a little easier to understand the beauty of it. As he steps out onto the wire and we see the astounding view, it appears as though he's floating on air in the clouds. Zemeckis gives us certain shots in which we can barely see the wire. We try to simulate such thrills with observation decks with areas of glass floor. Petit took the thrill to another level (pardon the pun). It's a beautiful moment, but it's sadly broken up by continual voice-overs and cutaways to Petit talking to the camera.

There's a moment where Petit's mentor and teacher Papa Rudy (Ben Kingsley) teaches him about saluting as a sign of respect to the audience. At first Petit can't grasp the subtlety necessary. He goes overboard with an egregious wave. "That's too much. Do Nothing!" Papa Rudy keeps advising him. It's a common piece of advice given from directors to their actors in order to make their performances feel natural rather than theatrical. Sadly Zemeckis could have used the advice himself. Some of the flourishes he puts on this film, including the documentary style elements are distractedly ostentatious rather than feeling natural.

I'm not sure if these additional "talking head" shots are to blame for the rest of the film's shortcomings or not. They do add bulk to the runtime that would have been better served by scenes devoted to the relationships the film tries to establish. The primary relationship being that of Petit and his girlfriend Annie (Charlotte Le Bon), who after a brief meet cute is relinquished to the background while the film pushes forward without her. It leaves a fairly important later interaction between the two lacking in emotional resonance.

The mood is kept light-hearted throughout much of the film, only the later moments as Petit gets nervous as the day of the event nears and the eventual lengthy setup manage to build tension. Some of the film's best moments are when it shifts gears into spy movie mode. Petit had to study the buildings, the operations and the workers. He and his group had to sneak into the upper floors and move lots of equipment without being caught. The setting up of the wire and the walk itself is a natural fit for a Hollywood film. Petit's dramatic story was just waiting for Hollywood to adapt it.

It's something no man had ever done and no one can ever do again. Considering this, and the trouble Petit and his cohorts went through to make this dream come true (a dream we're still talking about today), it's hard not to be at least a little inspired by his determination. Human beings love stories of people chasing their dreams against insurmountable odds. That's precisely what this movie is about, even if the way it goes about it is somewhat hit or miss. It's unquestionably an astounding visual spectacle, but the structure could have benefited from doing less.

Posted by Zach Owens
Email ThisBlogThis!Share to TwitterShare to FacebookShare to Pinterest
Labels: 2015, 3, based on a true story