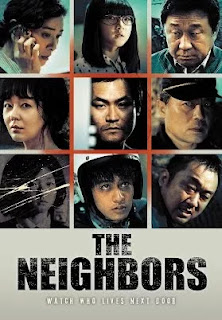 This 2012 Korean thriller is a tale of murder and ghosts (although not scary ghosts, this isn't a horror film). It's based on a 2008 web comic series by Kang Full (or Kang Pool). The ensemble cast living and working in fairly close proximity in their small apartment building, Gangsan Mansion, are forced to live in fear after a middle school girl is kidnapped and murdered right under their noses.

For better or worse, as an ensemble film, it doesn't deeply explore any one particular character. That sadly extends to the killer himself, who we are introduced to surprisingly early on, but never seem to grasp any sort of motive for his initial killing. However his later acts are obviously out of self preservation. The character we feel the most sympathy for is the stepmother of the daughter who was killed in the opening scene. 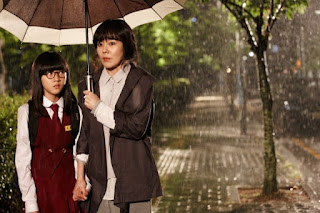 She's played quite effectively by Yunjin Kim (who some will recognize from the show "Lost"). Her relationship with the girl is shown in brief flashbacks as she remembers and grieves for her. The film briefly takes us through their initial meeting, and a few of those delicate moments in which the stepmother tries to grow closer to her. The emotional resonance is gained as the girl (Kim Sae-ron) begins to accept her new mother. The mother, Song Kyung-hee, feels responsible for her death because she didn't go to pick her up from school on the night she was kidnapped. The aforementioned ghost is that of the dead girl, who continues to come home and walk to her room in the evening while Song Kyung-hee is home alone. If at first these moments are meant to be used for scares, they later become a more honest representation of the way the loss of a loved one haunts those who grieve them. It's paid off in two different ways later in the film, one for the stepmother and one for the killer himself. Both of these are satisfying moments.

The film's main interest is in the way people don't take action even if they might know better. The interesting moral issue at play being that a certain number of neighbors or area workers know they likely have evidence in the case, but refuse to do anything because it wouldn't help their business. The suitcase salesman recognizes the suitcase used to hold the dead girl's body, but refuses to call police because it might be bad for business. After all, he isn't the only one who sells that kind of suitcase, or at least that's how he tries to justify his lack of action. 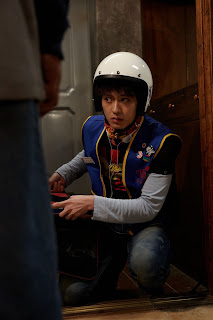 The film cleverly hands off from one member of the ensemble to the next as we're introduced to the pizza delivery boy whose name the suitcase salesman recognizes as the name the killer used when buying the suitcase. The pizza delivery boy whose memory of a particularly peculiar man is triggered when evidence points to the fact that the serial killers murders happened 10 days apart. He had delivered pizza exactly 10 days apart to the same strange man. It makes him wary upon future deliveries, but not enough to do something that might take business away from a regular customer.

These clues start staking up, but with different members of the community. Song Kyung-hee happens to find the strange man mopping up what appears to be a large amount of blood, one security guard notices a girls school uniform in the trash, and another guard notices that the strange man's water bill is getting suspiciously high. When one of the security guards goes missing, the other takes more interest in investigating his disappearance.

He's Pyo Jong-Rok (Ho-jin Chun), a man who is mere months away from the statue of limitations running out on his crime, which he's clearly still reeling from. He'd like to avoid attention from police for obvious reasons, but can't sit back while the people around him are being killed, especially when he might have evidence against someone. 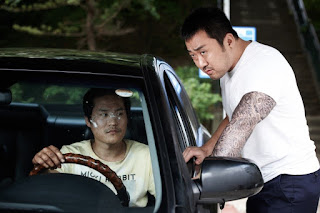 There's also a gangster played by Dong-seok Ma that proves himself to be the type of tough guy you wouldn't want to cross paths with. He finds himself mixed up in everything because the killer continues to park in his spot, which is clearly an unforgivable offense. He doesn't find evidence against him or have any interest in an investigation, but he does, nevertheless, have a role to play in the proceedings later in the film.

The killer, played by Seong-gyoon Kim, does notice the suspicious looks and tries to stay a step ahead of their individual efforts to investigate. The landlord continually pesters him about the state of his apartment and going to a meeting about apartment security. He refuses the invitations by claiming that he'll be leaving soon. Yet his continued crimes and need to cover up those crimes keep him around. It's fairly obvious from early on that his next target will be the daughter of the landlord. She happened to go to the same school as the first victim and looks quite a lot like her (she's played by the same actress). It becomes a game of whether or not the neighbors can pool their efforts to stop the man from striking again.

Director Hwi Kim keeps the film moving at a solid pace while working in a healthy amount of smaller moments. Sadly we aren't given more than just enough background on a few of the essential characters. Again, that notably extends to the villain, but then again this sort of person isn't the sort we're supposed to identify with. The script, which Hwi Kim adapted himself, has a number of twists and manages to keep things interesting despite giving the villain a lot of screen time from the very start. Hwi Kim also manages to impress with some interesting visual flair. One murder is cleverly cut away from while the repeated blows cause trimmers around the apartment. Shots focus on glasses of water on tables and flickering lights. It's the sort of deft touch we're used to seeing from classic Hollywood productions. "The Neighbors" is an entertaining film that, despite its flaws, is one of the better examples of this genre of film.