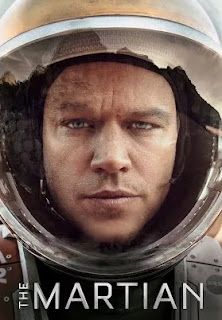 The big screen adaptation of the New York Times best selling book by Andy Weir opened this weekend to strong reviews and big box office numbers. From the news media's coverage of the film's success, that couldn't resist the obvious puns about it being "out of this world," to movie goers quick witted memes that point to the fact that we've spent a lot of money and effort to bring Matt Damon home in film after film ("Saving Private Ryan," "Interstellar," and now "The Martian"), this is one of the biggest fall releases.

It all points to the central struggle of the film for NASA, which is gathering enough interest and resources to approve the mission to rescue Mark Watney (Matt Damon) after they discover he was accidentally left for dead on the Red Planet. A lot of the film shows crowds around the world following the news coverage, and the powers that be at NASA discussing both the public handling of the situation and what they need to do to actually make the rescue happen.

The accident, involving a quick moving storm forces his team to leave even though they can't find Watney to confirm his death. However once the crew has made their escape and the storm has settled we find half buried Mark Watney waking up alone and struggling back to the relative safety of the Hab. His continued survival depends on his ability to grow food on a desolate planet, and find a way to communicate with NASA back on Earth. 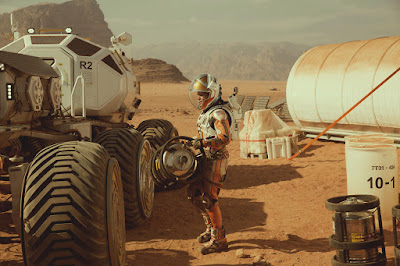 The first few chapters of Andy Weir's book was about Watney informing us (the reader) in the form of log entries of his plans to make water and grow food. These are followed up by log entries that inform us of how his previous plans panned out and what he'll do next. As dry as that may sound, these sciencey scenes are tolerable due to Watney's personality. Matt Damon brings the charm and likability necessary to carry these scenes, and of course the visual element helps as well. In fact, Damon is so good and these scenes are often so surprisingly humorous and good spirited that we rarely want to leave them.

Yet we do leave them in order to keep up with the other line of action that involves NASA back on Earth discovering that Watney's still alive and formulating plans to bring him back. NASA Director Teddy Sanders (Jeff Daniels) and crew supervisor Mitch Henderson (Sean Bean) butt heads over how to proceed. And engineer Vincent Kapoor (Chiwetel Ejiofor) works with JPL director Bruce Ng (Benedict Wong) to find ways to communicate with Watney, while also preparing a probe to be sent to keep him from starving while they plan a manned mission to bring him back.

These scenes also carry their own weight with a healthy dose of humor and drama. Each character is played with wit and charm that makes their interactions enjoyable. There's an awful lot of recognizable faces here. If the aforementioned faces weren't enough, there's also smaller parts for Kristen Wiig, Michael Peña, Kate Mara, Sebastian Stan, Aksel Hennie, Donald Glover and Mackenzie Davis among others. Each are effective in their minor roles, even if many of them are just there to fill out the cast with recognizable faces. Perhaps the most important of these is Donald Glover's humorous, eccentric astrodynamicist Rich Purnell, who comes up with a plan involving the returning crew of the Hermes and some new technology from the cooperating China National Space Agency. Yet for the sake of drama NASA director Teddy Sanders has to reject the idea (his reasons do make sense).

For Melissa Lewis (Jessica Chastain), commanding officer of the Mars mission aboard the Hermes, the struggle is coming to terms with the fact that it was her call to leave him behind. While everyone, including Watney himself, assures her that it wasn't her fault and that she made the right call given the circumstances, she understandably can't help feeling responsible. Her (and her team's) guilt is the deciding factor in defying NASA in enacting Purnell's gutsy plan.

Honestly we might have anticipated, perhaps even based on the cast, that these events would take place. After all, are they really going to cast Oscar Nominee Jessica Chastain, and the rest of the recognizable crew, only to have them wallow in self doubt as they slowly return to Earth without incident? The only question is how? And how they (and Watney) go about problem solving is mostly cleverly envisioned by Ridley Scott.

Yet a lot of time passes throughout this film, in fact a large chunk is glossed over with a title screen that says 7 months later. Time is ever one of the factors working against any story set in space. Events cannot be told in days or weeks. Travel is slow, and timelines stretch to months and years. Those months with so little food to sustain him does leave Watney a scrawny, gaunt shell of his former self, yet Damon's charm and Watney's sense of humor remains. There is, however, a sense of fear and reflection to these later scenes. Nevertheless, that jump across 7 months may feel jarring for some as it skips a substantial amount of time without any explanation as to what went on during those months. 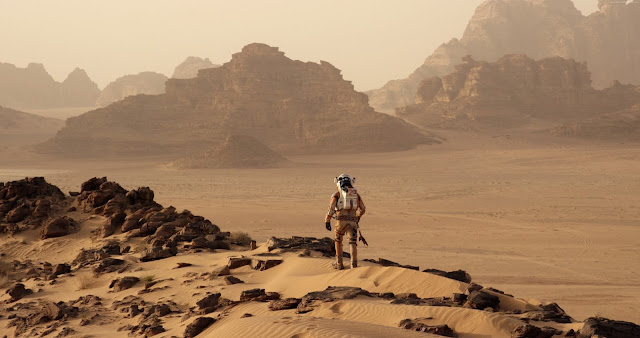 Ridley Scott himself claimed the film is about how the world takes interest when disasters strike, and people come together to help those in need. Whether its an earthquake in Nepal or another tragedy around the world, no one is alone. Scott's direction and Weir's story don't allow Watney to wallow in his isolation. There is a sense of hope and communication pervading the film. Scott instead gives the impression of isolation in numerous shots of the Martian landscape. It is desolate, but beautiful. It was shot on location in Wadi Rum in southern Jordan, which has served as Mars in other films such as "Red Planet," and "Mission to Mars." Yet unlike other similar stories like "Cast Away" and "Robinson Crusoe," Watney's isolation is lessened substantially by technologies that allow for video logs, listening music, TV show watching, and essential communication with NASA and the crew of the Hermes. Yet they don't make his continued survival and unbreakable will any less miraculous when considering how little food there was to survive on.

In similar fashion to the aforementioned news stations obvious puny coverage of "The Martian," several obvious songs are worked into the film for added affect. David Bowie's "Starman" plays over a montage of Watney and NASA preparing on their ends, while Gloria Gaynor's "I Will Survive" plays over the credits. Whether they add to the film or distract by just how "on the nose" they are is down to personal preference. I half expected to hear Bowie's other space related songs "Space Oddity" and "Life on Mars?" But, for better or worse, they didn't use them.

Yet these songs, the jump forward by 7 months and the avoidance of showing Watney in anything other than his usual jokey, upbeat mood is a curious choice. Many will find it a missed opportunity, yet it is, I think, partly the point. A later speech pinpoints his personal philosophy as one of optimism. He warns, you can either accept your fate, or you can get to work, solving one problem and then the next. It's the sort of strength of personality and work ethic required in dire situations. Even if its upbeat music often distances us from the sympathy we might have felt for Watney otherwise, "The Martian" is decidedly not about sympathy. It's about doing. And it does it well.

This film creates a rare opportunity to entertain while perhaps teaching a bit. It's a big budget film about space travel that involves a lot of science. If you're curious about the real thing NASA did an AMA ("ask me anything" for you less internet savvy) on Reddit that you can read here. And NASA posted an article back in August about 9 real technologies found in the film, which you can read here.

Posted by Zach Owens
Email ThisBlogThis!Share to TwitterShare to FacebookShare to Pinterest
Labels: 2015, 4, based on a novel, disaster film, space