Star Wars Battlefront Beta: The Good, The Bad, and The Dark Side 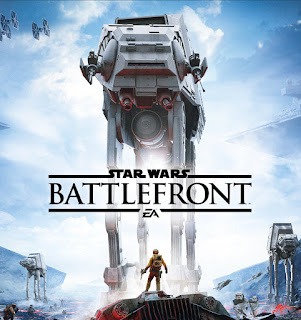 Upon starting up the beta you're greeted with the iconic images and music that immediately put you in the Star Wars universe and remind you just how much you missed all those classic Star Wars games from the PS2/XBOX/Gamecube generation. Seriously, where has the franchise been?

Once you load up your first match you’re greeted with the game’s face meltingly beautiful graphics that run at a blistering 60 frames per second. Once in a game mode a quick glance up toward the beautifully illustrated skyboxes reveal space battles taking place at the same time you wage war on whatever planet you happen to be on. Not only are they pretty to look at, they add a sense of grandeur to the events you’re partaking in. Whether it’s the dry rocky landscape of Tatooine or the shimmery snow covered hills of Hoth, there is a texture to the game that makes the universe more tangible than it’s ever been. Then after hearing some laser fire, explosions, jet packs, and the dreaded walkers it's quite clear that DICE nailed the iconic audio from a franchise with some of the most unique sound effects in film history. It is without question the most beautiful looking and sounding Star Wars game to date, and easily fulfills the promise of allowing the player to experience the greatest battles from the Star Wars universe better than any game that has come before it (including the two previous Battlefront games). 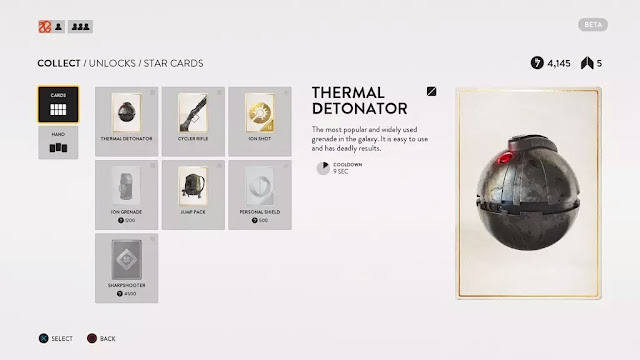 Gear:
Running and gunning with an arsenal of weapons that never require reloading (they overheat if fired for too long) is the most noticeable difference between Battlefront and DICE’s other multiplayer focused FPS series Battlefield. Another noticeable departure (not just from Battlefield, but also the earlier Battlefront games as well) is the removal of classes with unique weapons and gear sets. Your soldier’s gear comes in the form of a hand of three cards, each tied to the shoulder buttons or the triangle/Y button (depending on your controller). An ion charge used for making your primary weapon do more damage against vehicles is found in the middle, and on either side is the two swappable options that include items like a single shot sniper rifle (cycler rifle), a grenade (thermal detonator), or a jetpack. Each card requires a cooldown time after use which helps these more powerful items remain balanced. These customizable hands of cards serve as the replacement to classes and are therefore likely to be more numerous in the final game.

Weapons:
The beta includes four primary weapons to choose from. You’ll start with one and unlock the rest using the in-game currency earned by simply playing the game. They each feel balanced enough when comparing the fire rates and effective ranges of each weapon. Some are better for closer range encounters and some better at medium to long range. The longer you hold the trigger the more inaccurate your weapon becomes as the spread of laser fire continues to widen. Yet before it becomes too inaccurate it’s likely to overheat requiring a few seconds worth of cooldown. That is, unless you time a button press just right as the meter goes from full to empty. You can zoom in to make longer range shots easier, but it won’t affect the accuracy of your weapon. That is to say that you’re as accurate firing from the hip as you are when zooming through your scope. The scope simply makes pulling off headshots easier. Time to kill is equivalent to the time to kill in your standard game of Battlefield, which is faster than what it was in the first two Battlefront titles. It’s quick, but not too quick. It feels about right considering most players will be coming from shooters like Call of Duty and Battlefield. 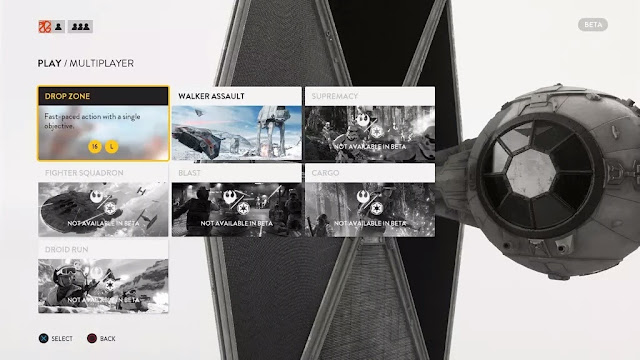 Game Modes:
The only single player mode available (it can be played in co-op) is “Survival,” and it’s a good place to start for anyone new to the series. A few waves of stormtroopers and perhaps an AT-ST or two descend on you, the lone rebel left to defend a barren rocky area of questionable significance. Certain waves require the player to capture and defend a drop pod that upon capture equips the player with a few additional power ups (you can only hold one at a time). The beta only allows players to attempt survival on normal difficulty through 6 of the 15 waves that will come with the full game. While harder difficulties, additional waves and the ability to play in co-op does lend to the appeal of such a mode, what little is available in the beta is decidedly too easy to play more than once. And even that is likely to be only out of curiosity. The star of the show is definitely elsewhere.

Yet the mechanic of capturing drop pods leads perfectly into the first multiplayer mode, which they’re calling “Drop Zone.” It’s a team based game mode for up to 16 players that requires the team to capture and defend the aforementioned drop pods on a map that features a decent mix of verticality and the option for both long and short ranged encounters. It’s easily the most balanced game mode available (as I’ll explain shortly) due to its reliance on gunplay over anything else.

While these two smaller modes are somewhat forgettable, the third mode: “Walker Assault” is the badly imbalanced recreation of the Battle of Hoth that Star Wars fans can’t seem to get enough of. If “Survival” is the obligatory co-op survival mode and “Drop Zone” is the team based search and destroy mode, “Walker Assault” is the more crowd pleasing equivalent of Battlefield’s signature mode: “Conquest.” It’s the mode with the larger, more expansive maps filled with up to 40 players, and of course, vehicles. Yet this one may just adhere a little too well to the outcome of the film. It’s near impossible for the Rebels to succeed in taking down the two towering monstrosities in order to defend their vulnerable rebel base. Nevermind questioning the practicality of enormous tanks slowly lumbering about on four legs (as if a giraffe and a hippo had a baby) and the fact that their armour is too strong for blasters until a cable trips them (which is possible in game by the way). This is Star Wars and therefore above this sort of questioning. Yet with them this battle is entirely one sided.

The job for the Empire’s troops is to hold out until the massive AT-AT’s walk past the three main checkpoints which will signal the end of the match. That job is made easier by holding the high ground for much of the match and the fact that players can take control of the massive guns in the AT-AT as well as their smaller cousins, the chicken legged AT-ST’s. Also included in that arsenal is the ability to take to the air in a Tie fighter, even if controlling one is more difficult than it’s worth for a majority of the player base. And then there’s the heroes. As unbalanced as the kill streak rewards found in Call of Duty and the Super abilities found in Destiny PVP, the heroes are awarded to players who have managed to score a number of kills and a wealth of points. The Rebels get Luke Skywalker (curiously wearing his all black “Return of the Jedi” garb, rather than his “Empire Strikes Back” winter wear) and the Empire counters with Darth Vader. With their light saber hack and slash, their force push/choke, and ranged lightsaber throw attacks they are sure to steamroll over every player in their path until their time limit runs out or the opposing team concentrates enough fire on them.

The Rebels on the other hand, have the more complicated and difficult set of objectives. Two capture points sit apart from each other somewhere in the middle of the two opposing spawn areas. Both must be activated and defended for a time in order to signal a Y-Wing bomber attack on the AT-AT walkers. Once the bomber attack is a go, the AT-AT’s will be animated with sparks all around it. At that time the Rebels must concentrate fire in order to damage the AT-AT in the hopes of destroying it before it passes the final checkpoint (of which there are 3). The AT-AT’s will only take damage from enemy fire during the Y-Wing bomber attack.

“Walker Assault” on the first day or so of the Beta was a guaranteed win for the Empire. Now that more players understand the objectives, the Rebels are making the battle closer, but wins for the Rebels are still a rarity. Hopefully DICE can use what they’ve learned during this Beta period to find a greater sense of balance.

More importantly, for the longevity of the game for the players, is variety. “Walker Assault” seems like a mode built to replay the Battle of Hoth alone. Unless they create their own noncanonical Star Wars battles, there can’t be many (if any) other places for “Walker Assault” to go. As someone who has already grown tired of playing this obviously imbalanced battle, it’s the other modes that seem like the ones worth replaying. 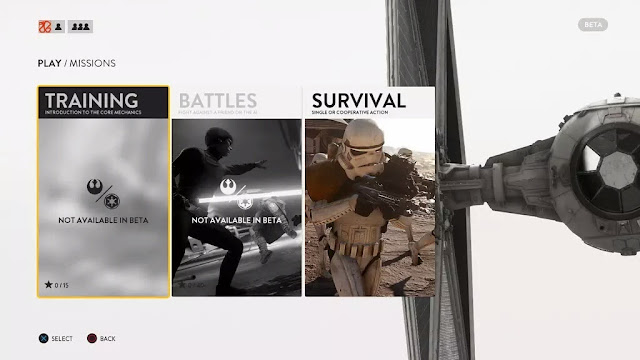 Additional Modes:
Other multiplayer modes teased, but unplayable in the Beta are “Supremacy,” “Fighter Squadron” (likely ship battles only), “Blast,” “Cargo,” and “Droid Run.” Also among the missions (“Training” and “Survival” modes are considered missions) is one called “Battles,” which is sure to be the “Galactic Conquest” mode we so fondly remember from Battlefront 1 and 2.

Unlocks:
Another factor of replayability is unlocks, upgrades, and collectibles. The menu does include a “collect” screen which shows all the weapons and cards (for your customizable hand of cards) you can unlock with the in-game currency. But it also shows a section (which you can’t enter during the beta) called “diorama” with a subtitle that says, “earn all the figurines.” These are likely the Battlefront equivalent of medals and patches found in Battlefield (earnable by completing challenges while playing the game). The level cap of the beta is level 5, and there’s no hint as to how much further you’ll be able to level in the full game. Yet just how many collectibles, weapons, and cards are left for us to discover in the full game is unknown. As for the Beta, it won't take long to unlock all there is to unlock. That's been a bit disconcerting for those hoping for that "carrot on a stick" style of addicting gameplay that makes you want just one more game to get that next unlock.


While Star Wars Battlefront was among the most popular multiplayer games of the PS2/XBOX era, the question remains, in an era when fully featured military shooters, that know how to keep players coming back, dominate the multiplayer landscape, will this be enough to hold players attention? We’ll have to wait and see, but my hope is that it will be. It’s a throwback to a more arcadey style of Sci-Fi shooter that looks and feels great, plus it has its own built in fan base. As for the Beta, despite its flaws, it has run far better than past Betas for DICE games. If they can add some more balance, there’s no reason to believe this won’t be one of the top shooters over the course of the next year.
Posted by Zach Owens
Email ThisBlogThis!Share to TwitterShare to FacebookShare to Pinterest