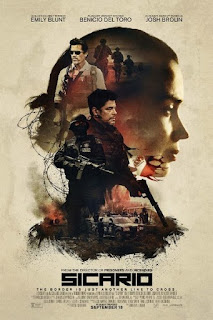 "Sicario" begins by explaining that the word sicario essentially means hitman. Along with the trailer, it's not terribly hard to tell where this film is going. What it does, and does well, is challenge us to think about what's right and what's going too far. Do we give up too much of ourselves and become evil in our pursuits to stop those we deem evil? That's the struggle we and Emily Blunt's character wrestle with in "Sicario."

It begins with a gruesome discovery after Kate (Emily Blunt) and her team close in on a house of known drug dealers. There aren't many people home, but what they find is the stuff of nightmares. Worse yet, they find an unexpected bomb that takes the lives of two officers. It's a sign of things to come. "Sicario" is an honest, often brutal look into the war on the Mexican drug cartels.

Early on she's asked by a government agent (Josh Brolin) to join a task force whose purpose is to take down a drug lord. Yet for much of the film she's kept in the dark as to their plans and their greater purpose. For the most part we see these events through her eyes. We are in the dark as much as she is. This film does an outstanding job of putting us in her shoes as we travel to Juarez and witness the terrifying world they're trying to take down.

In fact, there's quite a bit of traveling in the early portion of this film, and it's shown in spectacular aerial shots that serve the purpose of making Kate (and us) feel small. They often cut to her face after a series of these bird's eye views as she takes in the rough and deadly world she's entering. The ominous music is accompanied by the sound of gunshots in the distance and dead bodies proudly displayed in public areas. It is in every practical sense a war zone they're heading into. The smaller she feels the more hopeless her objective feels. She's out of her element and very aware that she's acting outside of her jurisdiction. The morality of what they're doing is one of her primary concerns. Yet she's constantly forced to make concessions about the acts she participates in, contributing to the feeling of loss that permeates the film.

She's introduced to Alejandro (Benicio Del Toro), a mysterious man whose purposes and loyalties are called into question a couple of times throughout the film. He's very obviously known to the men he's helping to take down, but just what his ties are to them aren't realized until much later in the film. He warns her during one of their early interactions that his plan and purposes would not make sense to her American ears, but in the end she would understand. It's a haunting interaction that we'd do well to remember at the end of the film.

Alejandro is both justice and evil, which is to say he comes by his justice by evil means. Del Toro wears that contrast on his face throughout the film. Kate is played with a lot of vulnerability by Emily Blunt. She is, after all, stuck in a situation where she wants to do some good, but she has no control over the methods by which they accomplish their goals. That vulnerability allows us to sympathize with her and what she's up against. Alejandro manipulates her to accomplish his goals, yet she's also the only person with the ability to do something about him and what has been done.

She also contrasts with the other tough guy veterans of the drug war that she's been forced to work with. The Josh Brolin character and the other field agents regularly joke around. They're loose, exuding a comfortability with the war they're fighting and the actions they have to take. They've clearly grown desensitized to the sorts of violent, illegal acts required to take down a drug lord, whereas she's never witnessed anything like it. She is, as one character puts it, a sheep among wolves.

Without being an ostentatious visual spectacle, it is beautifully, yet ominously shot by Cinematographer Roger Deakins. From the beautiful aerial shots of the first half of the film, to the night vision raid sequence that happens later on, this is one of the best looking films I've seen this year. The moody, affecting score by Jóhann Jóhannsson contributes to the tension that builds throughout the film.


The action sequences aren't done like your typical big budget action sequences. Rather than exploding with quick cuts, loud noises and bright flashes, they unfold before us with ominous music and smooth sweeping cinematography. We, like Kate, are not on the front lines, we are just trying to figure out what's going on and if it's the right thing to do.

"Sicario" isn't just beautifully shot, it's wonderfully acted and expertly paced. Del Toro, in particular, is so good he manages to steal every scene he's in. The only thing that will be pointed to as a potential problem is the shift in focus late in the film. While much of the film is strictly seen from Kate's perspective, a crucial later scene leaves her behind to follow someone else enact revenge. Despite how jarring it may feel to some, this is an important diversion. It doesn't, I feel, glorify the violence that takes place, but rather forces us to weigh the cost. And Kate is, in the end, forced to decide whether or not she can understand and even condone what's taken place. More terrifying for us, is that this is actually happening, and far closer to home than we would like to admit.