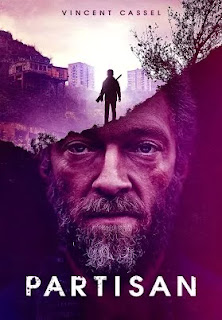 Similarly to Benecio Del Toro's character in "Sicario," Vincent Cassel wears the pain of a broken world on his face in Ariel Kleiman's debut film "Partisan." Except, rather than being a hitman himself, like Del Toro's character, he trains pint sized hitmen in a community he's built himself. Also similarly, that world weary face shows the contrast between a man trying to do the right thing, even if his methods are ugly, and perhaps their results just as ugly.

The film opens with Gregori (Vincent Cassel) laying the ground work for a commune he literally built from the ground up. It starts with the structure, but quickly expands to the people living within. He finds a single mother with a scar on her face holding her baby in a lonely hospital bed. Having noticed she's alone without even a flower to adorn her bedside table, Gregori begins to work his charms.

Next we flash forward to a time years later when this baby boy, Alexander (Jeremy Chabriel), has grown to be the eldest child in the commune, and he's joined by many others of both genders. Gregori has become father to them all, and his relations with the moms of the commune lead us to believe that he's likely fathered a good number of them. Yet what would lead to such a community with a number of women who, without a hint of jealousy, share the only adult male of the community is left unexplored.

What is hinted at is the fact that they've all come to the commune after being mistreated by the nasty men of the world. Gregori treats them all well, but rules the community without question. The children are all treated well, unless they become disagreeable. In fact, what sparks Alexander's eventual rebellious behavior is Gregori's treatment of another boy in the commune. Leo, having come in without being born in the commune, has a difficult time adjusting to life in this strange place. His continued questioning of Gregori sparks curiosity in Alexander and anger in Gregori. Cassel plays these scenes perfectly. While the child actors often fail to play scenes convincingly, Cassel's ability to play multiple emotions at once is what allows for continued investment in this film. He tries to remain calm and save face in these moments, but it's obvious his blood is beginning to boil.

The children do regular drills to keep them sharp, but they aren't the sort of drills you'd expect children to be doing. They involve target practice with BB guns, and mock assassinations with paintball guns. Completion of these drills are met with cheers from both the other children and the adults. The full realization of what these drills are for comes later as Alexander turns mock killings into real murders. Yet who exactly they're killing and for what purpose is left for us to ponder. The drills and killings are celebrated with karaoke parties, which tends to be their only leisure activity.

However, it's these ventures outside of the commune that contribute to Alexander's growing distrust of Gregori and this supposedly idyllic community. His few interactions with outsiders tend to disprove Gregori's assertion that everyone is evil. In fact, one later interaction with a child his own age makes him think twice about whether or not he's the evil one.

Yet these child actor's performances are so spotty that often they remove us from important moments. Leo, in particular, is ineffective and Alexander is at his best when playing the part of watchful observer (which, thankfully, he does for a majority of the film). Kleiman, ever aware of the kids poor performances, often cuts away from them during scenes in which they speak, but their poor line delivery detracts nevertheless.

Kleiman's pace is slow and deliberate. His world building is both good and bad. He gives us what little exposition we need in the beginning, he holds back details allowing them to slowly reveal themselves. That is, if he sees fit to reveal them. The rest we're to assume for ourselves. We're not told much about what lead to this near dystopian future. We're not even told where it takes place or what the time period is. Worse yet, for a film willing to show a couple of ugly acts, it shows unusual restraint with perhaps the most important act of the film. It's a choice that deliberately fails to deliver on the main character's story arc. There's nothing wrong with restraint. Sometimes restraint is the right choice, but Kleiman leaves too much unsaid. As a result "Partisan" feels like a film that tells half a story.