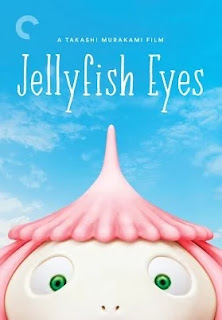 Japanese artist and animator Takashi Murakami coined the term "Superflat," which started an art movement characterized by flattened forms of Japanese art and animation. It was also a successful piece of marketing. His feature film debut feels like something of a marketing campaign as well.

"Jellyfish Eyes" is filled with similar elements from other pieces of pop culture from Pokemon to Godzilla. It's all combined in a package clearly designed for kids with possible hopes of creating a franchise that would generate money from merchandise, books, and of course sequels (one of which is teased in a post credits trailer). Yet before Murakami gets too far ahead of himself, we have to judge his first film for what it is.

Originally conceived as an animated film before being thwarted by producers, Murakami settled on a hybrid film much like early Walt Disney productions where animated characters interact with live actors in the real world. The story involves the typical stuff of anime shows involving elements of family and school life greatly complicated by supernatural, science fictiony goings on, and of course a plethora of cutesy creatures. Yet these badly animated CGI creatures and their tenuous connection to their owners do nothing to elevate the story or its characters in this bizarre campfest.

Young Masashi (Takuto Sueoka) moves to a new town with his mother (who for no rhyme or reason stops appearing in the film after about the first half hour). The move was prompted by an unnamed disaster that forced them from their previous home and took the life of Masashi's father. It's a clear callback to the Fukushima disaster of 2011. Taken one step further, the new town they move to houses a mysterious power plant, where Masashi's uncle works. The town despises and fears the plant and it even seems to be the target of one religious cult's non-stop attention.

Masashi, in desperate need of connection in this new place, finds a peculiar looking creature that bears a passing resemblance to a jellyfish. Masashi names it Kurage-Bo (Jellyfish boy) and the two bond over a shared love of chee-kama (a cheese and fish cake stick snack). Yet after joining his new school he quickly finds out that he isn't the only kid with a strange creature. They're known by an acronym that spells out F.R.I.E.N.D., in one of the most "on the nose" aspects of the film.

While the other kids creatures are controlled remotely by cell phones, Masashi has no control over his creature. It stays with him and defends him based on their friendship alone. Masashi finds himself in need of protection early and often as the other kids in his class tend to use their "friends" as battlebots where they each derive a sense of pride from supposedly having the most powerful of these "friends." Masashi and his jellyfish boy creature are mocked and beaten by these bullies until a young girl from his class, Saki (Himeka Asami), comes to his rescue. She does so multiple times with her oversized fluffy creature that looks like something from "Where The Wild Things Are." Nevertheless, it's the beginning of Masashi's only real friendship since moving to the area.

However, the greater conflict involves the aforementioned mysterious power plant, which is being used by a group known as The Black-Cloaked Four, whose look and over-the-top performances seem borrowed from the campy villains of the "The Mighty Morphin Power Rangers." They're attempting to gather the kids' negative energy through the creatures they've distributed to them, answering the question of where these things came from (well sorta, how they created them is not explained). Their purpose is a bit vague, but it seems they can use this energy to summon a giant "friend" that looks like a bad cartoony ripoff of Godzilla. His size and destructive power would be used to destroy the world in order to rebuild it. As if to take the Noah and the flood method of removing the overwhelming evil in the world.

There's also some strange wordy exposition that poorly establishes these villainous Black-Cloaked Four and their nefarious plans. These villains, their peculiar activities, one act of suicide (that may or may not have actually happened) and an odd religious cult (that doesn't really factor into the story at all) are elements sure to leave the film's intended audience (and the adults for that matter) dumbfounded. Nothing really makes sense in this film. Worse yet, the overly complicated and lengthy 40 minute climax of the film involves all of these things, and a group of students with their creatures, converging on the power plant where... things... happen. It's confusing enough that I couldn't spoil it if I wanted to. Especially considering that this last 40 minutes introduces us to a new character and Masashi's "friend" who, in true deus ex machina fashion, develops whatever new, previously unknown power he needs at the given moment in order to save the day. That is of course, until it doesn't anymore, so that Murakami can manufacture some false despair in Masashi who worries for his "friends" safety.

That despair forces some somewhat awkward crying scenes from kids whose spotty acting abilities are hit or miss throughout. At times these performances are even laughably bad, but then again there was likely an abundance of directions such as, "cover your mouth and looked shocked," as invisible things that they'd animate later fly through the air. Even that basic direction is poorly performed by at least a few of the kids. And Masashi's uncle Naoto (Takumi Saitoh) is quite often played in a straight faced, robotic manner that only gets more robotic when he's forced to play scenes opposite himself, after a nonsensical plot twist.

This is a prime example of the fact that some things that work in animation just don't work when translated to live action. It's the type of story, with the types of characters and performances that might (and that's a big "might") have worked in anime form, but as a live action feature film they simply don't. Yet the more I think about this movie, the less its story works, and the more its poor, campy performances bother me. While young kids might enjoy the quirky CGI creatures, I wouldn't expect them to know what's going on in this film. They'll likely be bored and confused. That is the ultimate test for a film such as this. Fail that test and there's no one left for "Jellyfish Eyes" to impress.