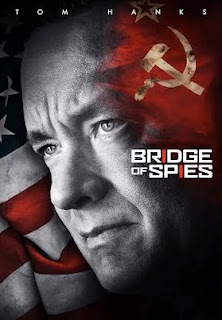 The opening of Spielberg's "Bridge of Spies" features one of the more brilliant shots in the film (of which there are many). The Russian spy at the center of the conflict, Rudolf Abel (Mark Rylance), sits with his back to the camera. On either side we see his reflection in the form of both a mirror on his left, and a self portrait he's painting on the right. It's a physical representation of the battle between perception and reality that he and Donovan face throughout the film.

To his credit, Spielberg (and the writers, Matt Charmin and Joel and Ethan Coen) stay away from villainizing the Russians, despite the fears of Americans at the time. They do establish those fears by showing the instructional videos children watched in schools about how to duck and cover in the event of a nuclear attack. They're also established with threats toward Donovan and his family simply for being the man defending the supposed spy.

While Abel is shown doing spy-like things, the specifics of what those are, are left unsaid. He is, nevertheless, played as an easy going and pleasant man by Mark Rylance. The performance is quite good despite its simplicity. Once he's arrested he's appointed a lawyer in keeping with the law. That lawyer is James Donovan (Tom Hanks), and once appointed the job he insists on keeping to the constitution rather than taking the easy way out. That's the uncompromising strength of character that Donovan exhibits throughout the film no matter the situation he's presented with. Whether its the judge telling him that he shouldn't care that they sentence a Russian spy to death, or the angry mobs that attack his home, Donovan stays true to what he believes in. He's intent on giving Abel a proper defense, because he believes in following the constitution. Abel also makes a compelling case for Donovan to do so when he suggests that if an American spy were to be captured in Russia, Donovan would likely hope the Russians would take care of that American too.

Donovan clearly sees what most people, in their fear and hatred of Russians cannot. American treatment of captives is of supreme importance. The world's eyes are on them, specifically those of the Russians who, should they obtain an American spy, could look at the American's actions as an example. That's why Donovan's proper defense of Abel and the constitution is of supreme importance. 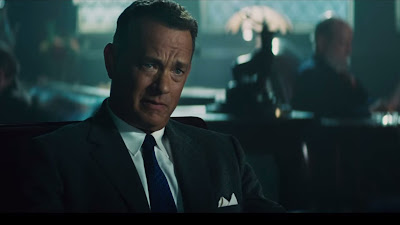 The interesting part about the first half of the film is watching Donovan struggle with the reality of the situation versus the perception that the public has. That struggle continues later in the film when he's forced to see through the false perception the Russians try to trick him into seeing as he's trying to negotiate the best possible deal. That deal involves the exchange of Rudolf Abel for an American pilot that was shot down while flying over Russia. Yet the situation is complicated by the fact that an American college student studying abroad in Germany is captured when visiting his girlfriend on the wrong side of the Berlin wall. Donovan's objective is to go to Berlin and negotiate the exchange just for the pilot, but he isn't willing to leave the other man behind. Whether its the American people or the CIA, or even the people at his firm, Donovan quickly finds himself the most hated man in America. That perception would remain unless he, as a non-government employee, can successfully bridge the two nations on the brink of war.

Many of Spielberg's best films are those that capture events (whether true or not) of the past, "Indiana Jones," "Empire of the Sun," "Schindler's List," "Saving Private Ryan," "Munich," "Lincoln," are among the best of those. And "Bridge of Spies" fits nicely among them. Yet even among that list there's a very different mix of Spielberg styles. Spielberg's fun popcorn films like "Indiana Jones," and "Jurassic Park" are fun films with infinite rewatchability, then there's the more visceral styling of "Saving Private Ryan," "Schindler's List" or "Munich" and the more talky, dramatic stories like "Lincoln." "Bridge of Spies" is a talky, dramatic film, but it is a far more entertaining experience than "Lincoln." It feels somewhere in the vein of "Lincoln," and "Schindler's List" with their characters struggling to do the impossible despite overwhelming public angst towards their goals. Considering the number of nominations those films received at the Oscars, "Bridge of Spies" is due to have a field day come award season. And yes, it is deserving of those potential nominations.

Spielberg is an expert craftsman capable of turning your average script into a visually stunning film whose attention to detail, even in the smaller moments, is the stuff of legendary classic filmmakers. But "Bridge of Spies" script by Matt Charmin and Joel and Ethan Coen is quite good. It doesn't villainize anyone, and it understands that its time is better spent making us sympathize with Donovan and Abel (who we might have otherwise been doubtful of), rather than the American pilot who is captured later in the film (who we're likely to root for as it is).

It isn't an action film by any means, but there is one spectacular action sequence with a plane that's among the best of its kind. And true to Spielberg form, this film is beautifully realized. The late 1950's never looked so good on screen. Cinematographer Janusz Kaminski, who has shot most of Spielberg's films over the last 30 years, is likely due for another nomination for Best Achievement in Cinematography for his efforts in helping to bring Spielberg's vision to life. The costume design, sets and everything else that went into bringing the time period to life looks appropriately lived in and astoundingly genuine.

I usually think of Tom Hanks as an actor who is best when playing a version of himself. Whether or not his on-screen persona as Hollywood's morally upright everyman extends to his off-screen personality I cannot attest to, but it is, perhaps, worth thinking about considering the film's opening shot and it's continual examination of perception versus reality. As usual, here Hanks is always the smartest, most morally upstanding person in the room. It's a role he's perfected, and it's one we can identify with. He's the essential bridge for the audience into the story. And that moral uprightness is essential to what we like to think of America as a leader in the post WWII world. Furthermore it's an ever important lesson we'd do well to remember today as well. But lest you think I'm writing off Hanks performance as par for the course, I'll mention that it's a great performance, and one of Hanks' best in recent years. 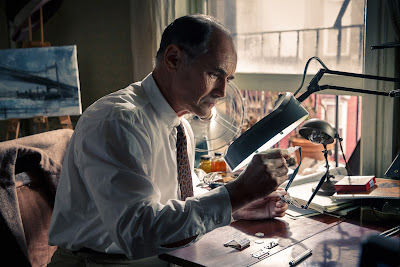 Just as notable as Hanks is Rylance's performance as Rudolf Abel. He's calm, cool and collected throughout the entire film, but delivers as a man resigned to whatever fate he's due for. A repeated gag is Donovan's surprise that Abel isn't worried, to which his calm response is always the same, "would it help?" If only we could all so clearly control our emotional state. Rylance carefully crafts a subtle performance of a character that, at first, we can't be sure we can trust, but his cool under fire and growing respect for Donovan grants us a sense of sympathy for him. He's every bit as likely to get nominated as Hanks for his part in this film.

I could continue to praise the film or I could leave you with the fact that Spielberg's uncany ability to turn a talky script into a beautiful cinematic experience is something worth seeing. There's not one bad performance in this film, even if there's a few wasted characters, but their absence later in the film does not make it feel lacking. It's one of the best films of the year, and even if it's not the best Spielberg film, it's easily one the best he's made in a long time.