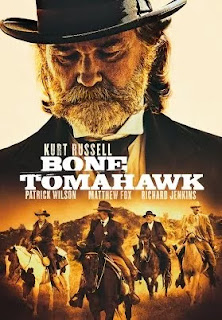 Rare is the western genre these days. Hollywood has given up on the genre thus relegating it to independent releases. The latest is an even more rare film that combines genres. Hollywood's effort "Cowboys vs Aliens" was a combination of the western and sci-fi genres that just didn't work. Here, making his directorial debut, Zahler combines the western genre with the horror genre to far greater effect. It also features a cast of far bigger names than you expect to find in your average independent film. "Bone Tomahawk" was released in so few theaters that it got a simultaneous VOD release.

The most notable actor in the film is Kurt Russel, who sports one of the greatest western looks in cinema history with his stellar stache and wavy salt and pepper hair. He's Sheriff Franklin Hunt, the honorable leader and defender of the people of the unnamed small western town where the story begins. We're introduced to Arthur O'Dwyer (Patrick Wilson) and his doctor wife Samantha (Lili Simmons). “This is why frontier life is so difficult. Not because of the Indians or the elements, but because of the idiots.” It's a line leveled at the men of the film by Samantha, which includes her own husband. While working on the roof of their home during a storm, against her will, he fell and broke his leg. 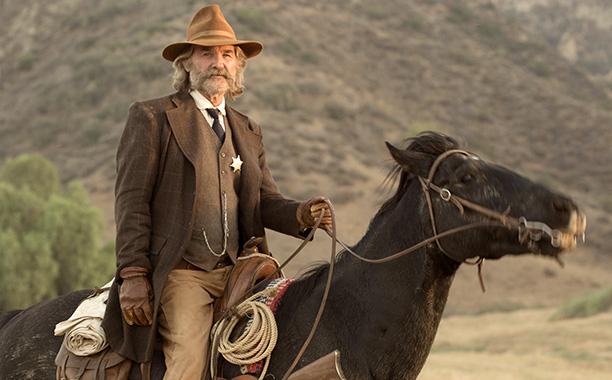 Meanwhile, at the local tavern a suspicious man, who refers to himself as Buddy (David Arquette), is shot in the leg while trying to escape when Sheriff Hunt shows up with a few too many accusatory questions. Buddy had just come to town after desecrating an Indian burial ground. Deputy Sheriff Chicory (Richard Jenkins), who plays the likable old timer and moral center of the film, spotted Buddy burying items he had likely stolen. Yet it's the act of having desecrated an Indian burial ground that's the most concerning.

They call on Samantha to come pull the bullet from the leg of Buddy while he rests in jail. That night a group of Indians comes seeking revenge on Buddy, having followed him into town. They capture him, Samantha and the other, younger Deputy Sheriff Nick (Evan Jonigkeit) which kicks off the main portion of the film. Between Sheriff Hunt and the badly injured Arthur they form a posse joined by Deputy Sheriff Chicory and the fancy dressing, mysterious, and overly confident John Brooder (Matthew Fox of "Lost" fame). It isn't until later that we find out that they're a few too few to take on the journey and eventually raid the Indian lair. 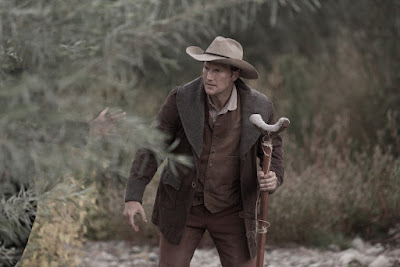 The Indians are cannibals making the haste of their journey even more necessary. Brooder reveals over time that he's killed a vast number of Indians in his time, and he's clearly all too proud of it. Arthur is the truly inspiring man unwilling to give up his search for his loved one despite being forced to make the trek on his broken leg. It forces him to move at a slower pace which means the others give him a head start at the beginning of the day and eventually pass him leaving him a trail of rocks so he can catch up with them once they've made camp in the evening.

This travelling quartet learning to get along and keep each other safe along the way is a big part of the film. In fact, we learn a good deal about the characters, Deputy Chicory and John Brooder in particular. They have a number of disagreements along the way, but no disagreement is too much to keep the posse together. In fact, its something of a notable contrast found in Zahler's script, which seems intent to portray the difference between the civilized men going up against a group of truly brutal, inhumane, cannibals. The posse may at times have questionable morals, but there is a sense of decency to them. Each time they get angry at each other, they break down and conclude the scene with apologies. Brooder, despite his tough, prideful personality, is given two moments of humanity, one in which he shows his sentimentality for his trusty horse, and the other I won't spoil. Arthur gets angry, likely due to the pain of travelling on a bad leg, but also because he refuses to give up the search for his wife. Deputy Chicory is easily the most likable of them all. Richard Jenkins brings an almost child-like innocence to the role that make us root for him. And Sheriff Hunt is the peacekeeper of the group.

They contrast the cannibals who so clearly don't care about human life. They mutilate themselves including their women who are blinded and crippled to only serve as child bearers. They give themselves tusks and ruin their voice box in order to add a strange device that gives them an eerie roar of a sound rather than any identifiable speech. Yet none of these things are as bad as what they do to their victims. The latter portion of the film is where the horror genre takes over the film as these cannibals do unspeakable things. It's so stark a contrast to the slower earlier portion of the film that its gory shock value may just take viewers completely off guard.

The film, for the majority of its runtime, does move at a slower pace than what most audiences today are used to. It recalls films of the classic Hollywood era, and the fact that it's a western certainly brings John Ford to mind. Yet as good as some of the smaller moments are, the film feels bloated by its near overly slow pace. However, the effort is bolstered by solid performances by all the major characters, Patrick Wilson's Arthur is particularly effective as the man unwilling to give up on his wife despite the odds being stacked against him.

It's a peculiar film for various reasons, but it's daring as well. It's well made and features solid performances. The fact that its available for digital rental makes it available for more people than could see a limited theatrical release. Despite its lack of visual flair (other than its bloody effects), it makes for a solid debut for Zahler.