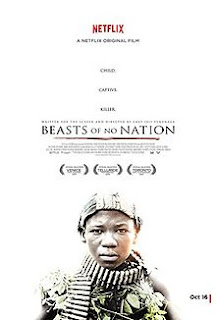 Netflix's first original theatrical film release (that was made available to stream on Netflix the same day) is a dark and sobering tale. It's based on the book of the same name by Uzodinma Iweala, but written for the screen by director Cary Joji Fukunaga.

It's a tense and often terrifying portrayal of the horrific human cost of war. In particular, it follows 8 year old Agu (Abraham Attah) whose taken in by the rebels militant leader known only as Commandant (Idris Elba). That's only after Agu is forced to run for his life from the PLF army who raided his home town. Their attack serves as justification for young Agu to join the Commandant in the first place and later for committing horrific acts. Being taken in by these rebels does save him, yet it severely damages his mind and soul. It's a heavy toll to bear for most adults, let alone a child forced to grow up in the midst of war.

Fukunaga's vision is explicitly visceral in its detailing of war and the horrific nature of the actions taken by Agu and his new militant family. However, essential to our understanding and empathizing with Agu is his origins, which are far more humble than what he would become. Initially he lives with his family in an unnamed West African country. Fukunaga gives us a near serene picture of a family living happily despite the ever present threat of war. Agu explains the family dynamic in voice over in a sequence that wouldn't be out of place in an indie dramedy.

Yet that's quickly juxtaposed with the violence of war as Agu barely escapes the PLF army with his life. He's found by a group of rebels, children and adults, who look like savages from "Lord of the Flies" in their sparse clothing with leaves strung around them. Idris Elba's Commandant is at first welcoming. He's seen as something of a heroic figure by Agu and those who serve under his command. He saved Agu, and teaches those willing (or perhaps even those unwilling) how to kill. It's easy to want to side with him for the villainy we witnessed earlier in the film, and his near constant battle cries continually point to the PLF as the true villains. Yet the mere fact that children make up a good number of the soldiers in his battalion should be our first indicator that something is off about him. 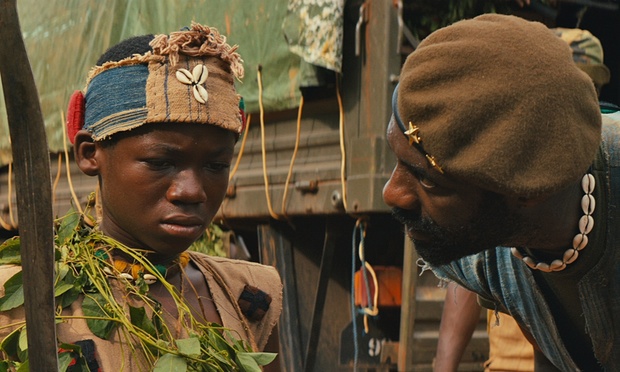 He is tough, but accepting, generous and kind, yet terrifying in his brutality. Elba plays all of these things and often in the same scene. His performance is, rightfully so, a big part of the buzz about this film. Yet it's Abraham Attah as young Agu who deserves the most attention. His dynamic performance is the clear highlight of the film. Yet he, like the others, is taken with this fearless commander who promises them vengeance for their losses. While they feel like they're being taught to grow up and be men, they're rather being taught to be murderous, thieving, savages. In fact, Agu's first kill, which Commandant forces on him, is one of the most chilling moments in the film.

One of the things "Beasts of No Nation" is exploring is how easily kids can be influenced down evil paths. Many of them never recover and become the violent adults that continue to lead future generations astray. It seems unlikely that the Commandant and some of his men had the morals to rise above their evil deeds, yet it is, partially further examination of the cost of war on one's soul. They fought the PLF because of their theft and murderous activity, yet to exact their revenge and take back what was lost, they find themselves enacting similar atrocities.

However, Agu isn't without a moral backbone. In fact, he frequently battles himself in voice-over while witnessing the atrocities committed by the people around him. They've become some sort of unholy band of brothers, and as the war continues to take more of their lives, Agu is forced to weigh the cost of their fight. It leads to the film best moment, in which Agu confronts the Commandant, having finally seen through him.

Fukunaga is able to avoid heavy handed exposition by peppering it in the form of battle cries and brief motivational speeches. They clue us in as to which side they're fighting, why they're fighting them, and what they intend to do next. Yet Fukunaga stumbles in other moments by giving us sporadic heavy handed voice-overs by Agu. They are narrations from the book, no doubt, as the book is written in first person from Agu's perspective. Yet the voice-overs in the film tend to unnecessarily state the obvious in an attempt to make sure we're thinking what the story wants us to be thinking about at exactly that moment.

Nevertheless, it's clear Fukunaga paid close attention to detail when putting together this extremely well crafted, and very affecting film. It's well acted, well paced and the moody score by Dan Romer perfectly sets the tone throughout. It's an ugly piece of human history and human nature that this film covers, and it's worth bringing to our attention.

Posted by Zach Owens
Email ThisBlogThis!Share to TwitterShare to FacebookShare to Pinterest
Labels: 2015, 4, based on a novel, drama, war