A Pigeon Sat on a Branch Reflecting on Existence (2015) 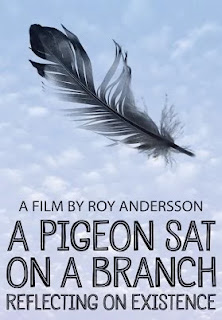 Swedish filmmaker Roy Andersson's 2014 film "A Pigeon Sat on a Branch Reflecting on Existence" has just made its way to the US this year, and only recently got a VOD release. Its trailer makes it look like a deadpan comedy, and to a certain extent it is, but it's also a clever, charming commentary on life. It is the third in a trilogy he's calling "the living trilogy," preceded by "Songs from the Second Floor," and "You, the Living."

Each film consists of a series of vignettes and a number of recurring characters that show up in multiple vignettes. Each attempts to depict the various aspects of human life. For the most part here Andersson casts a wide net in terms of the types of people and the struggles we face as humans. The title "A Pigeon Sat on a Branch Reflecting on Existence" is a reference to Pieter Bruegel the Elder's 1565 painting called The Hunters in the Snow. The painting's wintry scene piqued Andersson's interest as he looked at the birds perched on the trees above the hunters. He imagined them looking down and wondering what these humans were doing. This film has us, the viewer, playing the part of the pigeon in the scenario observing human life and trying to make sense of it. Often it's only when we stop acting and start observing that we realize what strange creatures humans are.

Many of the vignettes are quick and light-hearted, addressing the everyday gags we can all identify with, such as forgetting what day it is, trying and failing to meet up with someone for dinner, or those boring phone calls full of general pleasantries and lacking anything of real interest. From these scenes it moves to other less fun vignettes, like one in which a young dance student is awkwardly and continually groped by his female instructor until he leaves to escape the situation. Yet these characters return in the background of another vignette about a man attempting to meet a friend for dinner. It's a nice touch the way Andersson brings characters back while moving forward with another vignette. There's a sense of layers to the people, the vignettes themselves and the way the action is framed.

While there is no central character or line of action, the characters most commonly returned to is a pair of aging salesmen who continually fail to peddle their novelty items. We get to hear their prepared sales pitch a number of times, always ending with, "we want to help people have fun." Yet it's delivered in the dullest, driest way possible. It serves to contrast their line of work with their comically dull personalities. The two also frequently bicker over any number of things, with one of them frequently stumbling into depression while pondering philosophical questions.

It is by design lacking in an identifiable time. In fact very often scenes that appear to be modern are invaded by relics of the past. Several sets are used multiple times. A bar, and the town in general, serves as the setting for scenes that take place across a wide range of time periods from King Charles XII's reign in the early 1700's to soldiers during WWII receiving free drinks to lighten their mood, to more modern looking times. Andersson doesn't rest on the lighter side of human life either, he broadens his ambitions to incorporate more disheartening elements of human history, with affecting scenes devoted to war and slavery.

There's also nice touches like the disconnect between younger generations and history. As a scene develops at a bar where women sob as injured, disheveled soldiers return from a losing battle the film cuts to a modern day image of carefree youth as young lovers lay on a sandy beach. It's this sort of deeper commentary that Andersson so cleverly delivers in such a simple film.

It's a slow moving film, yet part of its comedy is in how long it takes for some scenes to develop. And even then, rather than getting stuck doing the same sorts of things over and over, Andersson changes the structure of his vignettes by throwing a few curveballs in the mix. Like one scene in which the two hapless salesmen head to the bar to peddle their wares until the scene is disrupted by King Charles XII and his men entering on horseback.

These scenes are all observed through static camera shots and cold color tones. It's reminiscent of Jacques Tati's "Playtime" that was done in similar long takes with a single camera setup. The effect on the audience is that we truly feel like a fly on the wall, a motionless observer. Tati explained the method as intent to include the audience and remove any possible distracting elements like camera movements and cuts from one shot to another. Tati and Andersson rather direct our eyes with movements in the frame rather than changes in perspective. Andersson, like Tati, aspired to make us an occasional participant in these scenes by having some of the characters speak directly to us. One character in particular speaks to us and to the others around him, allowing the audience to feel as though we're sitting in the bar with them. And much like the other people sitting in the bar we don't move, thus our perspective doesn't change, we just watch and listen to the people interacting. It makes us a literal pigeon sitting on a branch watching life unfold for this town, we see how comical and strange and even inhumane these human creatures are.

It's a rare type of filmmaking that feels like an ode to an age of filmmaking when directors experimented with the medium rather than pumping out "by the numbers" productions through the Hollywood factory. Even more than that, it's a uniquely crafted commentary on human life through different time periods and at different ages. Art like this is rare and sure to be positively remembered in the same vein as Tati's film.