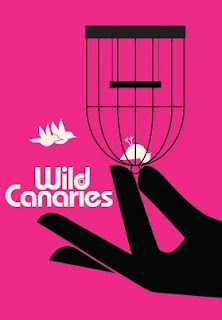 There's something delightful about those old screwball comedies of Hollywood's golden era. There's also something brilliant about the Hitchcockian mysteries of the same era. These different genres often serve as inspirations to young indie filmmakers, and with good reason. "Wild Canaries" is yet another film inspired by these classics. It takes the screwball comedy and mixes it with the murder mystery genre with just a smidgen of Woody Allen.

The film stars real life married couple Larry Levine and Sophia Takal, who scripted the film based on their experiences when planning their wedding. Not to say there was a murder they investigated, that is, of course, the classic Hollywood inspiration. Rather its in the way they, as an engaged couple, question and examine each other as if to decide if spending the rest of their life with each other is what they truly want.

They are Barri (Takal) and Noah (Levine), an oddball couple worthy of the screwball genre. She's the energetic goofball to his Woody Allen-esque comedically inept straight man. Early on their individual concerns are set up. He is basically broke and hoping to gamble his way into money during one of his many late night parties with his friends. She, on the other hand, is hoping to invest in rebuilding a resort. Yet neither of these plans matter as they're forgotten fairly quickly. What's more important is the fact that they seem to be growing apart, while growing closer to other people.

Noah works with his ex-girlfriend Eleanor (Annie Parisse), who is now a lesbian, as independent movie producers. Nevertheless, the two seem to be unusually close. But as odd as their relationship seems, Barri has her own oddly close relationship with her best friend Jean (Alia Shawkat). Barri and Noah tend to spend their days out with these other people, but come home to spend their nights together.

Barri is teaching her elderly upstairs neighbor chess in her free time, which she has plenty of considering she's unemployed. The fact of which is something of a pain point for Noah. Yet when Barri finds her elderly student dead in her apartment one day her suspicions turn towards the elderly lady's creepy son played very effectively by Kevin Corrigan (one of the few recognizable faces the film has to offer).

While Noah rejects the idea at first attempting to keep Barri from getting herself into trouble, eventually the peculiarities surrounding their suspect(s) start to stack up until he can no longer deny the possibility. And once he gets involved it becomes an opportunity for the two to reconnect. Yet until they do reconnect there are some serious tensions that rise between the two. These moments do threaten to turn this screwball comedy into a straight drama, yet they're fairly well performed and with an air of humor.

While their debates can be humorous at times, particularly the ones that involve him trying to talk her out of breaking and entering there is one particularly loud shouting match that does go as far as to become grating. While their time spent apart with other people doesn't feel quite right, especially Noah's oddly close relationship with Eleanor, their time spent together never quite becomes convincing evidence that they should be together either.

And as for the murder mystery, parts of it work. It is after all the macguffin of the film. Yet considering there's only two possible suspects, the prospect of a proper classic whodunit is considerably limited. A few of their investigative scenes manage to work both in terms of building tension and on a comedic level for their inept attempts to play the spy. Yet what causes their turn, in terms of their relationship, feels weak. It comes down to a general fear for each other's safety rather than anything specific about whether they're right for each other. This all goes without mentioning the fact that the eventual resolution is told in a poorly written and very wordy scene that tries to make sense out of this somewhat poorly constructed murder mystery.

It's a fairly ambitious film for these indie film makers that has a lot of good ideas, and certainly parts of it work. There is certainly some funny moments to be had here. Yet for a film that wants so desperately to be about its relationships and possible love triangles, they're poorly setup and lacking in their follow through. That's a shame considering what this film could have been.