"Black Mass" is the fascinating (and terrifying) true story of James 'Whitey' Bulger (Johnny Depp), the real life leader of the Winter Hill Gang. The film looks like the first exciting performance from Depp in quite a while, and it's directed by Stephen Cooper whose debut film, "Crazy Heart" won Jeff Bridges an Academy Award for best actor.

In addition to Johnny Depp, it has an all-star cast including (but not limited to) Joel Edgerton, Benedict Cumberbatch, Kevin Bacon, Peter Sarsgaard, Adam Scott, and Corey Stoll. 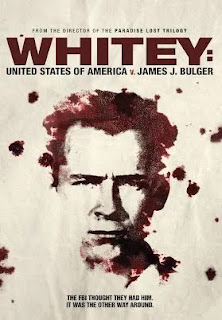 Now, if you're interested in the story, the trailer intrigued you and you want to find out just who all these people are, you can prepare yourself for "Black Mass" by watching Joe Berlinger's 2014 documentary: "Whitey: United States of America V. James J. Bulger" It's streaming on Netflix now. Or, I suppose, if you don't want things spoiled (if you didn't follow the story in the news as it was happening) you could watch the documentary after seeing "Black Mass," as a sort of special feature.

The documentary compiles interviews, reports, and unscripted time spent with families affected by Bulger's crimes. However rather than being a simple documentary about those crimes, of which there are many, the film seems to recognize that his guilt is without question and rather shifts the focus onto mounting a case against the FBI for their part in enabling Bulger and his gang to continue their illegal activity. It's an interesting story that unfolds and carries with it terrifying implications.

Nevertheless "Black Mass" is one of the most anticipated films of the late summer/early fall time slot and it frankly has a lot riding on it. Johnny Depp is arguably in need of a successful film that re-establishes his "acting cred." As unfair as that may be, it does, however, appear to be that sort of project for him. The role marks the second time Depp has played a real life gangster on the big screen. He also portrayed John Dillinger in Michael Mann's 2009 film "Public Enemies."

Director Scott Cooper also may have a lot riding on "Black Mass" considering it's just his third feature directorial effort, and his second film: "Out of the Furnace" was met with a decidedly mixed reception. It is also likely the definitive Hollywood take on the 'Whitey' Bulger story.

As a fan of Depp (and much of the rest of the cast) and someone who appreciated Scott Cooper's 2009 film "Crazy Heart," I'm hoping for the best.
Posted by Zach Owens
Email ThisBlogThis!Share to TwitterShare to FacebookShare to Pinterest