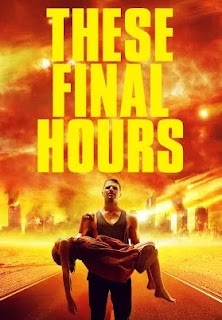 We humans are fascinated and terrified by our ultimate end. As such, an apocalyptic event that either destroys the world entirely or leaves it a broken wreck has become the subject of more and more films and TV shows. The Australian made indie "These Final Hours" is just another in this exploding genre (pardon the pun). While it doesn't particularly break new ground, and it's sure to remind of some of the other apocalyptic films we've already seen, "These Final Hours" is an entertaining and somewhat thought provoking look at humanity's final hours.

A radio broadcaster chimes in throughout the film with a bit of commentary now and then. He explains that an asteroid hit somewhere in the North Atlantic and a fiery wave of destruction has spread across the globe. Australia is one of the last places to be hit, but nevertheless the end will come in approximately 12 hours. That gives Australian citizens half a day to figure out what to do with themselves. Whether that means ending their own lives in a way of their choosing or ending the lives of others in a way of their choosing, or even welcoming the apocalypse with a wild party.

Now, this being an Australian film about the apocalypse, you're sure to feel a certain amount of "Mad Max" in this film. In fact fairly early on the central character, James (Nathan Phillips), feels quite a bit like Max, the only sane man trying to protect what few shreds of humanity are left in a world gone mad.

Initially, however, he's a very self-indulgent soul. He spends the opening scene with his serious girlfriend Zoe (Jessica De Gouw), before leaving her alone to spend his final hours partying with his other party girlfriend Vicky (Kathryn Beck) in an attempt to numb himself to the coming destruction. There's never a worse way to leave a girlfriend than to leave her to die alone while you party with your friends. It's a scene that haunts him throughout the film. The full revelations of their conversation is spread out as these scenes invade his psyche later on in the film.

As he's heading to the party he runs into a slew of standard apocalypse film crazies. There's the guy wielding a machete and attacking everyone he sees, and the two men preying on a young girl for their own unspeakable purposes. That's where things change for James. The little girl is Rose (Angourie Rice), who was separated from her parents for unspecified reasons. A flashback to the aforementioned intimate scene between James and his girlfriend Zoe explains that she was also pregnant, thus making his leaving make him look even worse. Nevertheless it makes him think about acting more fatherly where he might have left Rose to her inevitable fate.

After rescuing her he becomes her travel companion and protector whether he knew he was signing on for such a role or not. Rather than take her to her father however, he takes her to his party where they hope to find someone willing to take her the rest of the way. Spoilers, they don't find anyone in a right state of mind. It's the start of a character altering journey as his last few remaining interactions with those he knows makes him realize what's important in life as it's drawing to a close. One of the better interactions is a later scene in which he visits his estranged mother and reconciles with her before continuing on his journey.

As you might expect there's plenty of moments of crazy people doing crazy things, quite a few suicides, and wild debauchery during the drugged addled party full of people trying live out their final hours in a numbed state. Yet the film is undoubtedly at its best in its smaller, more human moments. While Angourie Rice gives a good performance as Rose, we could have used more interaction between her and Nathan Phillips' James character. He does, after all, find what little is left of humanity in the world (and himself) in this young, innocent girl. I won't spoil much more about what happens throughout the rest of the film but needless to say, James personal journey does lead him to where we expected from the start. It's a fairly typical ending to a film that felt on the verge of doing something extraordinary.

It's a pleasant surprise for a low budget end of the world film. The cinematography is surprisingly good and what few effects there are, are as effective as I've seen in a low budget film. It even makes you think about how you'd spend your final hours, and how far you'd go to maintain your humanity as the human race is dying. Make no mistake, it's no "Mad Max," but as far as apocalyptic films go, you could do worse.