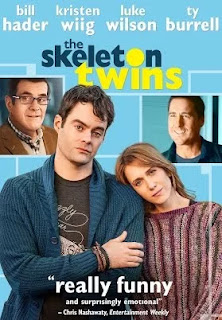 "The Skeleton Twins" is a film I missed out on last year. Had meant to catch up with it, but it's somewhat mixed reception kept me from making it a priority. Those who were negative on the film were so due to its, at times, cliche moments. It is after all about a gay guy and a his twin sister who contemplate suicide because life isn't turning out how they wanted. Yet as twins they're so in sync that their timely reconnection after 10 years allows them to be that support role they didn't previously have. Yet, despite the so called "cliched" moments, the performances and chemistry of Kristen Wiig and Bill Hader are so good they make this film work.

Hader plays Milo, the aforementioned gay brother of Maggie (Wiig). The film opens with a flashback to their childhood as Maggie's voice over explains that their father committed suicide. Shortly thereafter, Milo attempts it himself in a state of depression. The failed attempt brings Maggie and Milo together after spending the last 10 years on opposite sides of the country. He had been living in LA with aspirations of becoming an actor, yet struggling to survive as a waiter. She had spent those years in their hometown of Nyack, New York, having married Lance (Luke Wilson), whose very active, outdoorsy personality doesn't seem to fit with her less active personality. Luke Wilson plays Lance as a humorously outgoing, encouraging soul, but maintains a subtlety that keeps the performance from going over the top. Thankfully he's not one of the cliches here. He's a likable guy even if he doesn't quite seem like the perfect match for Maggie.

Their match is made even less likely to last after she makes some painful admissions to her brother later on in the film. And speaking of admissions, Maggie finds that since returning to New York, Milo had been reconnecting with a high school teacher, whose illegal, inappropriate relationship with Milo (when he was in high school) forced him to quite teaching.

Both of these people have some tough things to deal with, and perhaps their primary struggle is that life hasn't turned out the way they dreamed it would when they were kids. It's a struggle nearly all of us can relate to, and the way these two siblings know just the right thing to do to cheer each other up is what makes this such a pleasant film despite its deeper, emotional character arcs. In fact, one of the better scenes in the film involves the use of lip syncing to Starships "Nothing's Gonna Stop Us Now," in a moment where Maggie needed a pick-me-up.

For what it's worth what few bits that are film cliches don't go without a bit of self awareness. In fact when Maggie picks up Milo after his attempted suicide, he comments that he's become just another gay cliche.

These comedic actors aren't known for their dramatic work, yet they're both great. They're so affecting that it's surprising that their performances didn't get more attention back when this film originally came out. "The Skeleton Twins" is a rare mixture of funny and dramatic that feels just right.