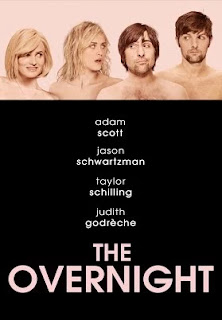 This movie is short, and hard to talk about without saying too much so I'll keep this short. It's also a hard one to recommend to anyone but the most open minded of people. In fact there are likely 2 kinds of people, or ways to react to this film. Some will approach it with an open mind and find comedy in its awkward sexual tension that often feels like its going too far, and then there's the people who will be so disturbed (and probably disgusted) that they'll be hard pressed to find the humor while they're cringing at these bizarre interactions.

The story involves married couple Alex (Adam Scott) and Emily (Taylor Schilling) hoping to find friends after moving with their young son to Los Angeles from Seattle. The opening involves a sex scene that tells you all you need to know about their intimacy issues, and lays the ground work for the sorts of private confessions they come to speak all too openly about with others later on in the film. These others they share their private lives with are married couple Kurt (Jason Schwartzman) and Charlotte (Judith Godrèche).

They meet when Kurt finds them at a park. The ice breaker is the fact that their sons, who happen to be about the same age, find fast friendship the way kids that age do. At first Kurt seems like your fairly typical LA hipster. He's very outgoing in a way that feels strangely charming and then maybe a little creepy. There's something that feels off about their interactions from the very start. Yet when he invites them to his home for family pizza night things get weird quickly after they put the kids to bed.

Alex and Emily are the ones we're supposed to identify with. We experience this bizarre evening through their eyes as they grapple with their own personal issues and try to figure out just how far they're willing to let things go. Writer/Director Patrick Brice tries to have fun by pairing off these people now and then. They each get an opportunity to play a one on one scene with each other, and Brice continually tries to trick the audience into thinking we know where things are going. Yet when it comes down to it we do know there's only so many ways things can end up, and eventually the film has to choose a path, which it does. And maybe if the night had ended a scene earlier this one would have felt a little bit better than it ultimately does.

I'm not much for broad comedy, and this film did nothing to change that. A certain amount of this film depends on whether you find dick jokes funny or not. And then of course, in all its excessiveness they take these jokes to the next level (which, of course, involves prosthetic genitalia). This is after all a story of awkward sexual tension among sexually confused couples. The characters all being parents attempting to keep a young mindset, start to feel like they're in that college movie about experimenting in order to "find themselves." The rest of the comedy involves their young children walking in at the worst possible time, every time.

While the four leads all have charisma and chemistry, despite the nature of their awkward interactions, this does become something of a bromance. The female characters begin to fade into the background the longer the film draws out. Their background and personal journeys aren't explored the way the men's are, particularly that of Adam Scott's character. Throughout much of the film I couldn't help but wonder if people really act this way. Does anyone allow an evening like this to continue despite their obvious reservations? While I'm sure it happens, it's not something I can identify with. Nor do I want to. As much as I tried, I could not find motivation for Alex and Emily to stick this bizarre night out.

I mentioned this film is short and it is, but it very nearly feels too long as it is. Considering the sun has to rise at some point, and the concept of the film is that it's happening during the overnight hours, it really couldn't have gone on much longer. And for that I'm thankful.