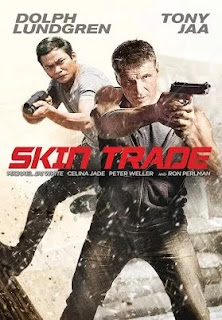 For the love of classic 80's/90's action films, who doesn't want to see Dolph Lundgren, Tony Jaa and Michael Jai White team up, square off, and then team up again? Well that's what "Skin Trade" does with the added bonus of an awareness of an important issue worth addressing in today's media.

In fact, this film is largely Lundgren's project. He began developing the film in 2007 after reading news of a group of 30 girls that had died of heat stroke and suffocation having been left in a vehicle along the border of Mexico and the United States. There's a scene in the film that portrays the event, yet overall the film doesn't quite come as close to delving into the world of the skin trade as the Liam Neeson action series "Taken."

It even fails its stars to a degree. True to 80's action film form, there is a noticeable lack of character development, particularly in the Tony Jaa character. He's Tony Vitayakul a cop from Thailand heavily involved in investigating the skin trade. He's given added motivation to stop those behind the skin trade by the fact that his girlfriend, Min (Celina Jade), has gone undercover as his informant placing herself at the mercy of those perpetrating these atrocities on young women. We're told that she herself was sold into the skin trade by her own parents. It's a heartbreaking thing to realize that such a thing could actually happen, yet the film allows very little time for the fact to sink in. Rather it rushes towards it's action sequences with reckless abandon, making the character of Min, who might just be the most interesting character in the film, feel like a missed opportunity.

Ron Perlman, as he often does, plays the villain. He's Viktor, the Russian leader of the skin trade that's being tracked (separately) by police forces worldwide, including Tony's Thai police force and Nick Cassidy's (Dolph Lundgren) American police force. Despite his heartless trade, Viktor is portrayed as a family man looking out for his sons and raising them in the worst way possible. But when his operation is closed on by Cassidy and crew, his youngest son is killed setting up his tale of vengeance against Cassidy. That vengeance comes when his men descend on Cassidy's home and murder his wife, steal his daughter, and leave him for dead. Which, of course, in turn, begins Cassidy's tale of vengeance. Because what's more classic action flick than a tale of revenge?

Yet revenge, as it tends to in these sorts of films, requires Cassidy to do some not very cop-like things. Which, of course, sets him at odds with his police buddies and Tony, who has joined forces with the Americans. This subplot could have brought up interesting questions of morality given this situation, however, this film has no intention of being that deep. Rather this middle portion of the film feels like a detour only meant to pit our three main action stars against each other, because let's face it, if you're going to cast Lundgren, White and Jaa together in a film, they'd better square off against each other at least once.

Doing the humanly impossible is par for the course in an 80's-esque action flick featuring these stars. Jaa in particular is known for his reality defying stunts. The most obvious here being his ability to keep pace with a motorcycle while on foot. And as for Lundgren, after taking the film's worst beating jumps out of his hospital bed and staggers his way out only to spend the rest of the film acting as if his body hasn't taken any toll at all. This isn't to say that the fights aren't well done. Jaa did his own stunts, without wires and surprised everyone on set with his physical abilities.

And yet as strong as most of the choreography is here, there are times it feels poorly staged and shot. In fact one later fight between White and Jaa feels particularly disorienting due to their near constant breaking of the 180 degree rule. There's also a number of boring, unimaginative shootouts later on in the film. But the technical problems aren't limited to the action sequences. Even during what few smaller moments there are, the editing is choppy and the interactions so poorly staged, written and acted that you begin to wonder if these people understand human interaction at all. The only interaction Cassidy is given with his teenage daughter is a particularly awkward one in which he wakes her up; she pops up bright eyed, as if she hadn't just been sleeping; they stare at each other smiling for a moment; he reaches to pat her on her head; and they go back to smiling at each other all before they finally begin speaking to each other. It's a strange scene.

Worse yet, they didn't realize that it seems insensitive to script sex scenes (as brief as they may be) in a film about skin trade, especially when one of the people involved in one of these scenes is a victim of that atrocity. Both of these scenes are lazy, unnecessary means of establishing loving relationships between the characters involved without having to write more interesting interactions.

It's a light, fluffy piece of action inspired by classic action films of the 80's and 90's. Yet, as mentioned, it wants to have an air of seriousness about itself considering the subject matter, yet it hardly feels respectful of that subject matter. For some it will have the thrilling action they're looking for, but for most it'll fail to make itself anything more.