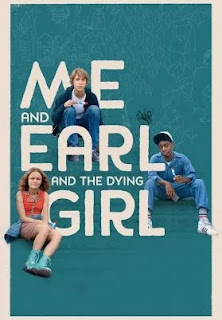 "Me and Earl and The Dying Girl" (based on Jesse Andrews' 2012 novel of the same name) was one of the favorites out of Sundance earlier this year. It took home the Grand Jury Prize and the Audience Award. Yet it's very short run at my local theaters kept me from seeing it till it finally got its VOD release.

It's just the second feature for Alfonso Gomez-Rejon and shows both an eye for detail in the design of the film, an energy to the way it was filmed, and yet some easy over sights common in less experienced filmmakers. Despite the film's mostly positive reception there are some notable issues.

The main problem, and it'll be too big for some to ignore, is indicated by the very title itself. It begins with "Me" which is to indicate the main character's self centeredness, and ends with "The Dying Girl" who is notably left without a name. Perhaps the title works as a fitting description, but it all to aptly describes the problem with this movie. It is about Greg (Thomas Mann). Selfish, stuck-up, loner Greg. A teen who refuses to get close to anyone. He prides himself on staying out of any of the particular friend groups (the jocks, the goths... and so on), attempting to say just enough to each of them to stay on their good side without actually being apart of any one of them. Even Earl, who has been his best friend since childhood, isn't given the title of friend. Greg prefers to refer to him as a co-worker, because it's easier to keep your distance than place your fragile trust in another person.

Earl (RJ Cyler) is the foul mouthed black sidekick character that has a better grip on social situations (not to mention sensitivity toward "the dying girl") so he can give Greg the necessary gut punch he needs later in the film. Yet that one sentence (long as it may be) delves as deep into his character as the film cares to. He's a "co-worker" because together they make their own peculiar, homemade remakes of classic films inspired by a slight change in the title. Francois Truffaut's "The 400 Blows" becomes "The 400 Bros;" "A Clockwork Orange" becomes "A Sockwork Orange," and so on. These flashes of comedy work particularly well, and often remind of Michel Gondry's "Be Kind Rewind." In fact most of the special effects reminded of Gondry's idiosyncratic special effects.

And as for "the dying girl," she's Rachel (Olivia Cooke) an acquaintance of Greg's who has recently been diagnosed with acute myelogenous leukemia. And, at least at first, the only reason Greg spends time with her is because everyone around him forces him to. Yet they become friends, even if he's bad at the whole friendship thing. However, the issue here is that her role in the film feels little more than that of a support role for Greg. Why it should be her responsibility to take in this lost soul just because his mother demanded he spend some pity time with her is beyond me. Yet their early interactions would indicate she's a good sport with a sense of humor, so maybe, just maybe we can give it a pass.

The story, as Truffaut astutely did with "The 400 Blows," maintains the perspective of the wayward youth. It begins with Greg telling the story in voice-over as he types the words he speaks. Later we find out why he's typing out this story, but rest assured Rachel had quite a bit to do with it. But the two side characters feel more like cliches than they do real characters. I'm not saying there aren't enjoyable moments with these characters, even some tear jerking moments, but Greg, in all his retrospective writing, didn't spend enough time writing about the people that changed his life.

He does, however, learn the valuable lesson about the value of friendship and artistic pursuit, even if someone had to suffer leukemia to teach it to him. Yet I disagree with some critics complaints that a dying girl can't or shouldn't be there to help a white male learn some valuable lessons. We all learn lessons from various people that come and go from our lives all the time. The problem is that she wasn't given opportunity to be more. For a film whose main lesson is to learn not to be selfish, this is a selfish film. The "Me" coming first in the title only reaffirms this.

Gomez-Rejon borrows from the stylings of Wes Anderson in his camera work until, in an attempt to set it apart, takes it a bit too far. Where in an Anderson film, the idiosyncrasies feel at home while capturing idiosyncratic characters. His trademark pans and dolly shots feel subtle compared to some of the things Gomez-Rejon does. That can be a good or bad thing depending on your perspective. However, more fun is the aforementioned Michel Gondry-esque practical effects that rely on props and stop motion. There's also some enjoyable performances in smaller roles, particularly that of humorously quirky side characters played by Jon Bernthal and Nick Offerman.

It's a flawed film, but an enjoyable one nonetheless. While it doesn't come near other teen coming of age stories of recent years like "Submarine" and "Perks of Being a Wallflower," it's better than your average teen dramedy.

Posted by Zach Owens
Email ThisBlogThis!Share to TwitterShare to FacebookShare to Pinterest
Labels: 2015, 3, based on a novel, coming of age, dramedy