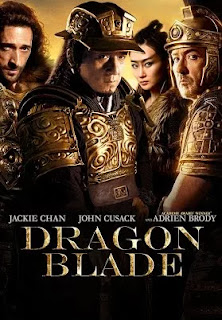 At it's core "Dragon Blade" is a fascinating story of two cultures learning to coexist long before the world knew the sort of peace we know today. Taking place during the Han dynasty, Jackie Chan plays Hou An the peace loving leader of the Silk Road Protection Squad. He also directed the spectacular action sequences of this big budget Chinese action blockbuster that also features John Cusack and Adrian Brody as warring Romans. Yet the rest of the film is so poorly done, it's a wonder that it's made as much money at the box office as it has.

The story involves Huo An taking charge of Wilde Geese Gate once Lucius (John Cusack) shows up with his Roman army to challenge them. A timely sandstorm interrupts their fight and allows Huo An to open the gates to the army in friendship. Once they've had time to get to know one another the two sides agree to help each other rebuild the gate if Huo An helps Lucius navigate to his nearby ally the Parthians.

He and his men left Rome when the villainous Tiberius (Adrian Brody) killed his father, blinded his young brother and claimed himself as their new ruler. Lucius' intention was to meet with the Parthians and convince them to join him in battle against Tiberius and his new regime. However, Tiberius seems intent on taking over the Silk Road while tracking down Lucius and his army of supposed traitors thus involving Hou An and the many people of East Asia.

The most noticeable of its problems is its strangely choppy editing, and it rears its head early and often. In fact, the opening sequence is so choppy it becomes disorienting. Throughout much of the film scenes aren't allowed to breathe, tensions aren't allowed to rise, and every possible emotional moment seems undercut by this odd editing. It gives the film an odd pace as even slower expository scenes start to feel rushed. The runtime for the version of the film I watched (and is available on Google Play) was around 1 hour and 43 minutes, although IMDB lists the film's runtime at slightly over 2 hours. It begs the question of whether or not the film's strange editing can be attributed to a version edited for western audiences. Yet I'm not sure whether more scenes would have fixed the issues, and this odd cutting isn't the only editing issue to be found here. Numerous times throughout the film a slow motion effect was clearly added in post production where the film had obviously not been shot for slow motion. It creates choppy visuals as the frames are literally drawn out rather than shot at high speed. There's also a significant number of scenes that involve flashbacks to earlier in the film, many of which don't feel necessary.

Serious moments are broken up by poor attempts at comedy, particularly one in which the early tension of Romans and Chinese occupying the same space is broken up by a child claiming his father (Lucius) said the Chinese warrior (Hou An) was, "terrible and he looks stupid." It's dumbed down writing for a younger audience, despite the fact that this bloody warriors tale is anything but a family film.

Jackie Chan's performance as Huo An is a mixed bag from scene to scene. He gives an affective performance later in the film, yet earlier scenes opposite John Cusack leave a lot to be desired. Hou An's knowledge of at least a little English goes without explanation. Nevertheless, Chan speaks it with an exaggerated inefficiency. His English sentences are broken down to their basest form.

Cusack gives a fairly monotone performance as Lucius, the leader of a fugitive Roman Army, mistaking lifelessness for a tough serious exterior. While Huo An and his people prefer peace, Lucius and his men are conquerors always seeking another battle. His backstory and the necessary expository information isn't given until around 40 minutes into the film after a number of feel good scenes that feel misplaced given that we know so little about these people.

These feel good scenes manifest themselves as happy moments of friendship and cooperation. The Romans and the Chinese learn from each other to build the gate while also learning to work together. The two sides also find time to show off their respective talents when they do some practice sparring against each other. Yet these cheesy, somewhat bafflingly light-hearted sequences begin to feel more like a Disney take on a fairy tale rather than a serious live action film.

"Dragon Blade" seems to deal in generalities far too often. There's nothing specific about what's going on here. It's a blatant failure to establish attachment to any of the characters. While we know the most recognizable stars simply because we recognize them as the main characters, it's hard to feel any sense of attachment in other moments when unnamed Roman soldier spars against unnamed Chinese warrior.

Tiberius (Adrian Brody) himself doesn't show up until around an hour into the film. And we're left to hate him based on expository stories told rather than deeds we've witnessed ourselves. It's a particularly one note performance from Brody who plays him with an accent that seems to come and go, and is curiously absent from all other actors portraying Romans or Parthians.

Much of the final act of the film involves a confusing battle of Roman army against Roman army working in cooperation with Chinese warriors against other Chinese warriors. While this story of countries working together and against each other is fascinating, it does, at times, become hard to keep track of.

Yet it isn't as though there aren't entertaining, well done, big budget sequences to be found in "Dragon Blade." In fact all the fight sequences are well choreographed, and a few of the bigger action set pieces are quite spectacular. As someone whose diverse career has seen him starring in big budget films from east to west, Jackie Chan was likely the perfect choice to bridge this meeting of Hollywood and East Asian cinema. Yet for all its fantastic production design and tense action sequences it does come down to a rather simplistic storyline hampered by bad editing and a very cheesy first hour. It's as prime an example of a hot mess as I've seen since... "Fantastic Four" (okay so that's not so long ago). It's so poorly edited, and so poorly written that it's a wonder that it ever got released. Other than its choreography, this movie is a failure in every respect, and certainly fails its considerable star power.