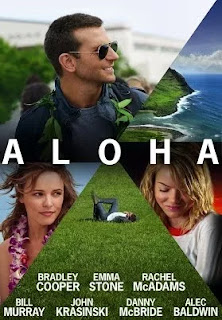 By now you know Aloha has received poor reviews and has suffered negative attention from the embarrassing set of emails that were released during the Sony hack. Those emails indicated that the film was progressing poorly in their early screenings and of course ever since its release it's continued to receive poor reviews and word of mouth.

Yet I remained curious to see just what went wrong with this film. It has an all-star cast, and a notable director behind it. So just what went wrong? Well the Sony emails do clue us in on the ever continuous tweaking and re-tweaking the film underwent, and that likely explains much of the film's choppy unevenness. But the main problem seems to be it's over abundance of content. There's too many characters, too many subplots, and not enough time to establish them all. As a result, much of the film feels rushed and many of the characters, interactions and subplots feel confusing, underdeveloped or completely forgotten. There's no build up to the main bit of action involving a military satellite funded by a rich business man, and worse yet this line of action ends in a fairly anti-climactic way.

Bradly Cooper plays Brian Gilcrest a former military man who came back from Afghanistan a broken man having nearly died in a missile attack. Now he works for the aforementioned rich business man Carson Welch (Bill Murray) who has a contract with the military to create a defense satellite of some kind.

Of course, all of this is taking place on his former Air Force base in Hawaii, which means he's forced to interact with his ex-girlfriend Tracy (Rachel McAdams) who, being removed from their former relationship by 13 years, has married strong, silent Air Force pilot John 'Woody' Woodside (John Krasinski). They live happily with their two kids in Hawaii, and everything is fine and dandy until Brian shows up. Then for reasons unknown (till much later in the film) their happiness breaks down.

Brian's escort and assistant is Captain Allison Ng (Emma Stone), the at first over-serious, then overly outgoing character that easily draws the most controversy here. She greets everyone she meets with her story about how her mother was Swedish and her father was half-Chinese, half-Hawaiian. For most people the problem is accepting Stone, who might just be the whitest actress in Hollywood, as a quarter Asian, yet as we know people of mixed race can indeed end up not looking the part. Cameron Crowe defended his casting of Emma Stone by explaining that the character was based on a person he knew in Hawaii that was part Hawaiian but looked white with red hair.

That isn't really the problem with the character honestly. It's her inconsistency. Initially she's uptight and all business until the very next scene when she randomly starts acting the opposite. She does however subscribe to the local mysticism and bond with the locals that she and Brian are forced to broker a deal with.

Brian and Allison fall for each other, of course, because it's expected rather than because it's earned. "They are attractive people working in close proximity for a couple of days, why wouldn't they fall deeply in love with each other?" is about the only reasoning we're given. The budding relationship is endangered when the military project forces a question of morals that they seem to differ on until they decide not to.

He also has to confront his somehow still existent feelings for Tracy, who seems to still have feelings for him too. Until they both don't anymore. By now you're sensing a pattern. These inconsistencies stack and make this film and its characters very hard to follow. These people just don't act like real people.

The awkward first conversation between these ex's consists of her greeting him with, "Hey, I refuse to talk to you." and him saying, "would you stop getting more beautiful!" This is not just bad writing, it's weird writing. No one has ever talked like this. The witty dialogue that was once a strength of Cameron Crowe's films is replaced by weird awkward interactions that don't feel real in any sense of the word. There's an over-edited dance sequence during a party scene between Emma Stone's character and Bill Murray's character that feels particularly out of nowhere.

The film awkwardly lumbers from one bizarre moment to another, and before long we realize we don't really know what's going on at all. There is a few moments late in the film that involve nonverbal communication. One scene between Gilcrest and Woody, that plays for comedy, and another between Gilcrest and a certain other character that somewhat inappropriately plays for a feel good moment rather than the difficult complexity that it should have attempted. It's a person learning the sort of news that most people would find devastating, yet the film tries to make this a joyful moment. It all leads me back to the fact that these characters don't resemble real people. There's challenging drama at the heart of this story, but in an attempt to keep it light-hearted, the film never gets around to dealing with that drama.

It certainly had some decent ideas and maybe a few parts of the film even work, however most of this film just doesn't. It's a lot of poorly executed scenes, under developed subplots and forgotten characters. It's actually impressive that Sony and Crowe could manage to waste such a beautiful location, a great soundtrack, and a collection of recognizable stars that are capable of pulling off both comedy and drama (Bradley Cooper, Emma Stone, Rachel McAdams, Bill Murray, John Krasinski, Danny McBride, Alec Baldwin, and Michael Chernus). It takes a particularly bad script (or at least a particularly bloated script) combined with poor direction and editing to make these stars look bad (particularly in Murray's case). That's what makes Aloha an odd achievement in bad filmmaking.