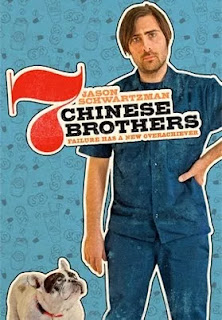 If Jason Schwartzman got his start playing the over-ambitious Max Fischer in Wes Anderson's "Rushmore," his latest film has him playing a character pretty much the opposite. Larry is a lazy good for nothing that steals from whoever happens to be nearest. Generally that's the restaurant he works for. His theft isn't money, however, it's booze. He pours their alcohol into his plastic big gulp cup and sips it throughout the day, including while driving about town. If he had a spirit animal it would be his equally lazy, heavy breathing French Bulldog named Arrow (A dog Schwartzman owns in real life), who may just be his only real friend.

After being caught stealing from the restaurant, he's fired by the two managers who seem all to eager to let him go. Yet his uncouth nature demands that he steal a bottle of alcohol and key one of their cars on his way out. Swartzman's natural ability to play this sort of quirky rebellious character makes him a natural fit for Larry. Despite Larry's rather lowly status in life, Swartzman grants a feeling of intelligence lying underneath. Perhaps his familial wealth has lulled him into a state of lethargy. He works but doesn't seem to have to worry about money so having a poor job or being fired for doing a bad job doesn't seem to bother him.

Nevertheless he finds another job at a local auto shop after taking his car in. A sign in the lobby claimed they were hiring and he finds the girl behind the counter attractive. That seems to be all he needs to be willing to apply, and his unending stream of jokes somehow manage to charm her rather than annoy her. At least for a while. Making jokes seems to be his shtick when meeting new people. In a way their slightly over-the-top and untimely nature remind of Michael Scott in his attempt to be an entertainer as well as office manager. The intended comedy, of course, being the awkward tension that arises due to these unwanted jokes.

However, his jokey nature is an inconsistent attribute as it seems to only exist in this early scene. He's a child trying to put on a show during recess to impress the cute girl in class. Nevertheless she falls instantly for his male nurse friend Major Norwood (Tunde Adebimpe). He's mostly an acquaintance who provides Larry with drugs from the assisted living home where he works and Larry's grandmother resides.

His grandmother, played by Olympia Dukakis, is the holder of all the family's money. Yet she isn't allowed enough screen time to establish much of a character or backstory. Nevertheless, Dukakis shines in the few small moments she's given.

It's the kind of indie film that has become all too common these days. It inevitably finds our lead and their crush doing karaoke in a bar in a scene that's meant to bridge the gap between the fun moments and the emotional resonance that brings our leads together. Yet this indie film isn't really about the budding relationship between Larry and Lupe. So this scene as well as far too many others fall flat. They tend to fail on the fun and emotional resonance they were hoping to carry.

The first 20-30 minutes feel like an extended trailer. That's perhaps due to the fact that they feature many of the moments found in the trailer. Nevertheless, they are essentially a collection of random sitcom moments, but they don't amount to much. There's no emotion to be found in this film, and repetition of several comedic bits adds to the exhaustion while we wait for something worthwhile to form. Sadly, nothing ever does.

There's a couple of scenes in which Larry states that all he really wants in life at the moment is to learn Spanish. It's a curious goal that doesn't relate to anything else in the film and is never followed up on. Just as many times he speaks of how he likes his job at the Quick Lube, and that it's rare for him to enjoy going into work. He attributes most of that joy to his boss Lupe, who he may or may not be attracted to. Writer/Director Bob Byington however does not allow anything close to a romance or even much of a friendship to form between the two.

For the life of me I can't seem to connect the title to anything in the film. Yet many things seem like they don't connect in this film. It is entirely lacking in purpose and ambition just as much as it's slacker main character. While that inner commentary on itself may work for some, it simply won't be satisfying for most. I've always liked Jason Schwartzman and to his credit, he adds personality to a film that would otherwise be completely lacking of any reason for watching. Yet it's very telling that a film that barely qualifies as a full length feature film feels too long even at just over an hour.