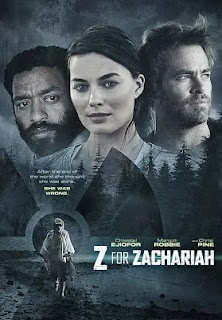 In film we like to think that video game movies are no good, and movies based on novels never live up to their beloved source material. Games simply don't translate well to the big screen, and novels have more content than can be squished into a 2 hour runtime. All of that may or may not be true, they do seem to be a mixed bag. Yet the vastly popular Fallout series of video games has undoubtedly served as inspiration for post apocalyptic films that would have done better if they'd been more of a direct adaptation and less about what they ended up being about.

The Hughes brothers 2010 post apocalyptic thriller starring Denzel Washington, "The Book of Eli," is one of the most notable of recent memory. It very obviously took aesthetic cues from the game series, but its end result was met with mixed reception. Now 5 years later we have yet another post apocalyptic tale that seems to have take a few cues from the game series in addition to its novel source material.

"Z For Zachariah" features a few lone wanderers, and a lead female character who's only companion is a her loving pooch. They enjoy relaxing in their secluded shack to the sounds of an old record player filling the room with classic big band favorites. All of these things are trademarks of the Fallout franchise, and with a new game set for release later this year, "Z For Zachariah" seems like an ideal release as gamer anticipation heightens. However it seems to struggle even more than "The Book of Eli."

It's an unconvincing, and poorly established post apocalyptic setting. Despite its assurances that this is a post apocalyptic world the area of land they reside in is untouched by the supposed devastation. All that remains is one pool of irradiated water, and there seems to be no indication as to what caused these desperate set of circumstances. It doesn't care much to establish its setting, it's rather more about the the three attractive leads. Yet Chiwetel Ejiofor, Chris Pine and Margot Robbie all appear as if they've come from the salon rather than spending their days struggling in a post apocalyptic world. Their hair and cosmetic upkeep does not seem fitting of the setting. You never knew the apocalypse could be filled with such attractive, well kept people. A similar complaint was leveled at "The Book of Eli" for a well groomed and makeup wearing Mila Kunis, who did not seem to match the setting in the slightest.

The initial meeting between Ann (Margot Robbie) and Loomis (Chiwetel Ejiofor) involves a rush to get him out of irradiated water that he mistakenly tries to bathe in. It leaves him sick in bed for days. Their bond begins as she nurses him back to health and they work to establish a better life. She's a farmer, and he's knowledgeable of engineering. Together they work to build a hydroelectric generator. The necessary materials for which Loomis (Chiwetel Ejiofor) wants to tear down a church to obtain. The church, however, was formerly her father's church so she objects outright to its destruction. It is, however, interesting the dynamic of an unusual couple forced to rely on each other despite not having much if anything in common. Yet the fact that they're both attractive people living in close quarters and they're the only ones around lends to the idea that they'd fall for each other fairly quickly. However, when an attractive, mysterious stranger shows up as an uninvited third wheel, the dynamic is confused even further.

While Ann is friendly enough to take Caleb (Chris Pine) in right away, Loomis is distrusting of him immediately. The two don't get along from the outset, partly due to their natural distrust of other human beings in this desperate time, and partly due to their growing affections for Ann. The longer he's around, the more Loomis jealously witnesses their glances at one another and their ever increasingly flirtatious exchanges. Loomis quickly starts to feel like a third wheel, yet his desire for Ann never weakens.

While initially race doesn't seem to play a part in the dynamic, Loomis' eventual jealousy leads to an awkward conversation in which he tries to assure Ann that it's okay if she wants to explore her relationship with Caleb. We know he isn't really okay with it, and it becomes extremely evident when the conversation ends with him telling her it's okay for them to go be white people together. It's an angered stab, and about the only one that brings up the race issue.

Shot on location in New Zealand, the landscape, as beautiful as it is, is not what we would expect of a post apocalyptic story. Yet the accents of at least two of the leads would suggest that it's meant to be somewhere in the American south. The story is based on a novel of the same name by Robert C. O'Brien in which a 16 year old girl lives alone on a farm after her family left her to search for survivors. However not long into the story a stranger named John Loomis shows up wearing a "safe suit" of his own design. Throughout the novel he is made to grapple with his own past while looking forward with his newfound companion.

25 year old Margot Robbie portrays the teenage girl, and 38 year old Chiwetel Ejiofor portrays Loomis. And in a fairly unforgivable oversight is never allowed to be established as a character. He does show his knowledge of engineering and struggles with one difficult encounter from his past in a rather talky scene, but isn't allowed much depth beyond that. He is something of a sympathetic character in the film, while he's something of a monster in the book. Worse yet, there is no third character in the book. Chris Pine's character is a strange addition to the story that essentially changes everything about it.