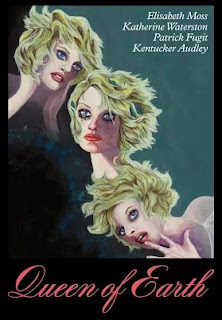 "Queen of Earth" is easily one of the most disturbing and unsettling films you'll see that isn't under the horror genre. It doesn't deal in ghosts and dead bodies, it's a character study of the breakdown of the human psyche. It's slow, but mesmerizing, filled with remarkable performances by Elisabeth Moss and Katherine Waterston. The camera is allowed to linger for longer than we feel comfortable with, in close ups of their faces. The frame is regularly filled with their teary eyed faces and disheveled hair.

For what little action takes place in this film's relatively short runtime it's astounding just how exhausting and surprisingly suspenseful this film is. I assure you I mean that in the best possible way. It isn't an easy film to watch. The characters are emotionally and mentally drained, and the film has that effect on the audience as well.

Catherine (Elisabeth Moss) was an extremely co-dependent person. She relied on the support of her boyfriend and her father for everything. Her father provided her with a job. He was a famous painter, and she his assistant. She's an aspiring painter herself never able to get out from under his shadow. Early on in the film she's dealt a staggering blow as both her support structures fail her. Her father dies, and the opening scene shows her boyfriend admitting his infidelity and leaving her alone. Her only means of coping with the situation is to rely on the only person she has left in her life. Her best friend Virginia (Katherine Waterston) invites her to stay with her at her family's vacation home. A trip the two make yearly. It's a beautifully secluded location, yet serves as further separation from a world that has left her on her own.

To make matters worse, as if a revenge of sorts whether conscious or not, Virginia frequently spends time with her jerk of a boyfriend Rich (Patrick Fugit), effectively leaving Catherine to wallow in her grief. Flashbacks clue us in on a similar but opposite situation that played out at the same vacation home just a year earlier. Catherine had brought along her uninvited boyfriend James (Kentucker Audley) to their getaway. Virginia was a resentful, broken-hearted third wheel. However, this year, the tables having turned, finds Catherine's weaker psyche incapable of dealing with the situation.

These friends have a lived in quality to their interactions. They know each other intimately enough to push the right buttons when cornered. It results in painfully honest stabs at each other in moments of heated conversation. Virginia, for instance, openly runs Catherine down for living in her father's shadow, while Catherine accuses her of never working for her money at all. They share in their painful relationship history that finds them incapable of letting the bad boyfriends go. Each has a story to tell about how mistreated they were in their previous relationships, yet they find themselves unable to say "no" when their respective boyfriends come back asking for forgiveness. As unhealthy as their relationships are, their friendship hardly feels better. Many scenes show Virginia's boyfriend Rich being rude and awful to an already fraying Catherine, yet Virginia noticeably keeps silent in these moments.

Also noticeable is Moss' performance turning from teary eyed depression to creepy laughter late in the film. In a particularly creepy moment she tells a visitor, "I could kill you and no one would know." There's enough truth in her voice that we can tell she's considering it. Alex Ross Perry cranks the ominous music continually throughout the film, and Moss' ever fraying performance turns us from pity to horror. She's absolutely terrifying. It's an astonishing range of emotional states she displays. From fairly early on there's a moment that hints at a fascination with death when she pulls out a painting of a skull and clutches it to her chest. She admits to Virginia that she doesn't feel like she exists anymore, and she truthfully has little reason to care about anything or anyone anymore, including herself. Perry's tendency to allow the camera to linger, and scenes to draw out plays mind games with us as we watch. It's hard to get inside the mind of someone who can't quite understand her own mind. Perry understands how disturbing that is for us, and allows these moments to draw out.

The story and emotional performances play so effectively it's hard not to be disturbed by every frame of this film. The tension builds to the breaking point witout giving us a proper sense of closure or pay-off. While that can be frustrating, it's all part of Perry's exploration of the psyche, and we are as much a part of it as his characters. This is a brilliant performance by Elisabeth Moss that isn't likely to be topped by the end of the year. I couldn't quite make up my mind about Perry's previous film "Listen Up Phillip." "Queen of Earth" is a brilliant. A character study of rare quality.