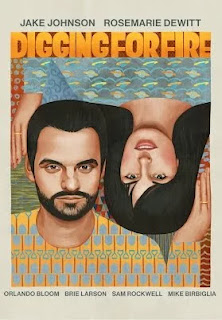 Joe Swanberg has a particular style of slow moving, meandering indie film that doesn't really lend itself to broad appeal. His 2013 film "Drinking Buddies" was one of his more well liked films and my introduction to his work. It told the story of Luke (Jake Johnson) and Kate (Olivia Wilde) who were co-workers at a brewery. They grew close to each other and realized how much better a match they were for each other than the person they were with at the time.

"Digging For Fire" is essentially the opposite. It co-stars Jake Johnson (who co-wrote the script with Swanberg) as Tim, a high school teacher in a stagnating marriage. His wife Lee (Rosemarie DeWitt) is concerned with taking care of their 3 year old son, wanting to provide the best possible education from a young age. She fights with Tim about it a few times. He, being a teacher in the public school system, can't understand why Lee would object to sending their son to the school system he teaches in.

The two just can't seem to connect anymore. They're struggling, especially Lee with the question of marriage vs individuality. Which is better, or can they exist together? For him there's the question of our own mortality. They take their arguments with them on a trip to a friend's vacation home. While there, Lee assigns Tim to work on their taxes, while she takes off for the weekend to get some alone time with her friend. Tim, on the other hand can't seem to concentrate on the taxes after finding a bone and an old rusty handgun in the hillside near the pool. Lee thinks it's strange, but tells him to let it go. Obviously it's not a good idea to dig up someone else's yard right? Yet of course, once his curiosity takes hold he can't just let it go. It's representative of his fear of aging and mortality. It's a frequent subject of the seemingly random chats Tim has with the cast of star studded cameos and side characters appearing in the film.

While Lee is out, Tim invites a handful of his buddies (played by Steve Berg, Mike Birbiglia, and Sam Rockwell) over to the vacation home. And it doesn't take long for Tim to convince them to dig for more secrets. If Phil (Mike Birbiglia) is the uptight unadventurous one, Ray (Sam Rockwell) is his particularly uncouth opposite. Seeing them interact is funny if only for their opposing personalities. Much of the comedy of this group hanging out together is tied to their drug phased conversations.

Eventually another friend they've nicknamed Tango (Chris Messina) shows up to the party with a pair of girls in Alicia (Anna Kendrick) and Max (Brie Larson). Once everyone else stops digging and starts to relax, Tim finds a friend in Max who becomes almost as interested in the mystery as he is.

Meanwhile Lee has her fun weekend outing cancelled by her friend who can't seem to get away from taking care of her kids. Instead she meets a charming, attractive restaurant owner in Ben (Orlando Bloom), who helps keep a desperate bar patron at bay. These new friends become their "almost dates" for the evening. At least for a while they seem like better matches than the person they're actually married to. Max is young and fun to be around for Tim, who seems desperate to keep a young mindset. And Ben is mature, romantic and a good cook. Yet there might be more spontaneity in Lee than she's willing to admit, and more maturity in Tim.

The taxes don't get done, she doesn't get her night out with her friend, and he doesn't solve the mystery of the buried bones, as unimportant as these things may be in the end. However, it also seems to lack that moment of revelation in which their appreciation for one another feels earned. But there is some fun to be had in "Digging For Fire." And it's hard not to appreciate the final scene between Tim and Lee. I still haven't decided whether or not I like Joe Swanberg's specific style of indie drama. Yet I appreciate the way he allows the camera to linger and the actors to use naturalistic (almost adlibbed) dialogue. "Digging For Fire" and "Drinking Buddies" are well made films, not great films, but good films nonetheless.