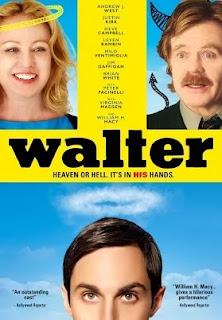 Based on a short film of the same name, "Walter" is about a boy who seems to be under the impression that he has been gifted with the divine power to determine whether a person will go to heaven or hell. How or why he believes this is what the movie hopes to explain.

Walter (Andrew J. West) is shy, awkward, and seems to exhibit a cold detachment from the world. He wakes up in the morning, gets ready for work, and heads out to the local cineplex where he spends his days cleaning and tearing tickets. As he walks to the theater, he keeps his arms at his sides. He exhibits the comical awkward walk that involves him not swinging his arms, which was the subject of an episode of "Seinfeld" years ago. As Walter walks to work he silently judges those around him with a single word, "heaven" for the lucky ones, and "hell" for the less fortunate. Just how he's able to determine what fate a person deserves is something he can't explain himself. He just knows.

When he gets to work we're introduced to the film's bully Vince (Milo Ventimiglia) who picks on him, but Walter seems to know he'll have the last laugh as he silently labels Vince with "hell." Shortly after, Kendall (Leven Rambin) arrives. She's the attractive blonde that works behind the concession counter, and Walter clearly has a crush on her but doesn't know how to interact with her. It's especially difficult when Vince embarrasses him and tries to steal all her attention, even if she's unwilling to give him any. The oddity here is that all of these actors feel too old to be working at a small town movie theater. Chalk it up to poor casting, but none of them seem quite young enough to pass for high school age, which seems to be the indication here.

Despite his deficient ability to interact with other human beings, he assures us that it's his job to judge the living. At work, he's the weird one no one talks to, except to make fun of. His home life, however, is a picture of perfectly neat orderly living. His shirts are ironed every evening, and folded perfectly for him by morning. His room is neat and tidy, and he has stacks of alarm clocks around his bed to ensure that he never oversleeps. His mother makes him eggs for breakfast, which he doesn't really have the time to eat, but strangely she also has a pan of eggs at the ready for dinner when he comes home as well.

As orderly as it may seem, there's certainly also something off about it. Nevertheless, he gets along with his mother well enough during their brief interactions. At work Walter tears tickets of movie goers, and as he places the tickets into the collection box, he instructs the customer to walk to the right or left. These instructions are always followed by a judgement as well, which he renders audibly. They seem to be loud enough to make us wonder why no one reacts to him. At one point, out anger, he even yells at an entire line of customers that they're going to hell, however no one responds, and the film never stops to wonder about the how unethical his decision making seems to be. Everyone that comes in seems a new visitor, since Walter never seems to see repeat customers that he's already judged. The movie tickets might as well be train tickets on which Walter's in charge of stamping a destination.

It's a peculiar, high concept opening to a film, whose ever so slight comedic undertones would be lucky to get a brief chuckle. Yet the film takes a turn pretty early on, once Greg (Justin Kirk), a recently deceased man shows up asking Walter to make a judgement. Greg claims to have died 10 years ago, yet he's been stuck living as a ghost waiting for Walter to make a decision about him.

At first Walter is dumbfounded because he can't get a read on him. He tries to explain to Greg that he judges the living, not the dead. The fact of which doesn't seem to make any logical sense, considering that a living person would certainly still be on Earth and not heading to either heaven or hell. Also there's the question of whether a person can redeem themselves even if they've been a person deserving of Walter's harsh judgements or not. The film doesn't bother to answer such questions, which seems a scripting oversight.

The presence of Greg, and Walter's inability to handle the situation leads him to consult therapist Dr. Corman (William H. Macy) who doesn't treat Walter the way you'd expect a professional to treat a patient. Rather than listening and trying to help, Corman often laughs at Walter's stories and at one point even tells him to leave the office because he might be beyond helping. While these interactions are meant to play for comedy, they seem to undercut the more serious nature of the second half of the film.

Eventually Walter spends some time with Greg, listening to his story. Greg explains that things fell apart between he and his wife, and now that he's dead he wants Walter to send him on before his ghostly presence has to witness his wife getting married to another man. As he takes Walter to the church where the couple prepares for a wedding ceremony, Walter's memories of his own father are triggered.

Walter's relationship to his father Jim (Peter Facinelli), his ultimate fate, and how they relate to Greg and his story are slowly made more clear throughout the film. Walter seems stuck in a state of arrested development having never properly grieved his father. There are more questions raised about Walter and whatever power he may or may not have, yet the film doesn't seem to make any distinction as to whether Walter's divine powers are in his head or not.

It's a somewhat bizarre little film. Having been based on a short film, it feels like it's about a short film's worth of content stretched to fill a feature length runtime. The performances are all adequate, but few of the characters feel properly fleshed out. It's a film whose premise doesn't make much sense, the casting choices don't make much sense, and the interactions between the characters also don't make much sense. It features Neve Campbell, Virginia Madsen, Jim Gaffigan and William H. Macy in small bit parts making them all feel like wasted potential. While the film makes an effort to make sense out of Walter's state of mind, it doesn't bother to answer any of the questions it raises. It's not a bad thing to make a film based on high concept, but it won't work if it's not rooted in strong characters. "Walter" has the high concept, but misses the mark on characterizations.