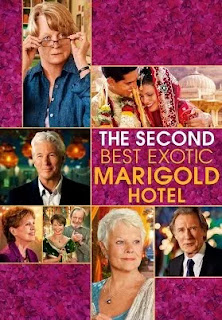 
Back in 2011 John Madden treated us to a very unexpectedly charming and heartwarming film in "The Best Exotic Marigold Hotel." It followed a group of senior citizens as they migrated from London to Jaipur, India in the hopes of settling at a retirement home/hotel. It was an inspiring film with reflections on love, growing old and finding meaning in life after retirement, all while dealing with the culture shock inherent in a move to a new place. Four years later Madden follows up that film with a continuation of their story, in which these elderly famous faces continue to find love while trying not to miss opportunities in the waning years of life.

After officially opening by the end of the last film, we return to find the hotel doing well. Regular guests come and go, and regular check ups happen to ensure that none of these aging residents have died. The regulars that stay have become apart of the place. As a result, the hotel is reaching max capacity and is in need of expansion to accommodate their growth. Muriel (Maggie Smith) and Sonny (Dev Patel) head to San Diego to pitch their expansion to potential investors, who tell them that at some point they will send an undercover inspector to evaluate the place. This news puts Sonny ill at ease wondering about every guest.

Much of the cast from the first film returns here. When last we left them, Douglas (Bill Nighy) and Evelyn (Judi Dench) were growing close. Now they're taking their time allowing the relationship to grow into something real. In the meantime, Douglas gives tours to traveling westerners using a local boy to feed him information through an earpiece. And Evelyn continues her work with the company she started with in the previous film. Now she's being asked to join full time, which would involve frequent travels. These travels would, of course, keep her from being with Douglas. However, the two are uneasy about bringing up the subject. It's a good opportunity for her, yet they don't want to be apart, even if their relationship is too new and underdeveloped for either of them to be sure what the right move is.

Madge (Celia Imrie) is looking for love, and has two suitors battling for her affections, but she seems to be falling for her kindly driver who seems the better man. And the most comedic subplots involves Norman (Ronald Pickup) and his growing affection for his girlfriend Carol (Diana Harcastle), who he is forced to protect, after he suspects he might have inadvertently hired a taxi driver to kill her.

As entertaining as many of these subplots are, they amount to mere distractions to Dev Patel's Sonny and his primary storyline. He's now engaged to Sonaina (Tina Desai), but he's becoming increasingly jealous of her close friendship with her attractive dancing instructor Kushal (Shazad Latif). On top of that Sonaina's patience is running out as Sonny concentrates more on business dealings with the hotel rather than preparing for their wedding.

When newcomer Guy Chambers (Richard Gere) arrives to stay at the hotel, Sonny believes him to be a hotel evaluator. He comically goes out of his way to make Chamber's stay pleasant, which often forces him to disregard his other guests. In fact, much of the comedy involves Sonny mistreating everyone else in order to pander to Chambers in the hope that he'll give a favorable review. However, Chambers claims to simply be there to work on a book, yet he also seems to be attracted to Sonny's mother.

To make matters more complicated for Sonny, Kushal has recently laid claim to the new property he had been hoping to use to expand their operation. Sonny feels it a huge missed opportunity that could sink the hotel. Kushal seems to be everything Sonny wishes he were. He has the money to buy what he wants. He's attractive, and knows how to dance. Sonny feels inadequate when compared to him. As Douglas later laments, the painful thing about life is how much potential there is, and how hard it is to see it slip away from you. This is something we see both the young Sonny, and the elder guests grapple with throughout the film. Sonny feels everything slowly slipping away from him.

His tagline in the first film was, "Everything will be alright in the end, and if it's not, then it is not yet the end." He would do well to remember his own advice. Even if that film eventually came to a satisfying end, we know life goes on. It's a film that's fairly dependent on you having seen the first. Many of the characters journeys are mere continuations of things previously established. As such, those journeys felt better established in the first film and they made much more ground as well. Nevertheless, it's an entertaining continuation, even if it lacks some of the endearing moments of the first, which also had far more satisfying character arcs. Yet it's more fussy first half gives way to a more pleasing second half that finds its way back to what made the first so enjoyable.

Even if it lacks some of the charm of the first film, it is charming in its own right, and much of that is attributed to the effortless performances of the stellar ensemble cast. Months after the events of the first film, these characters have found more life in these waning years than they did in their younger years. To add on to Sonny's tagline from the previous film, Muriel reflects, "there is no such thing as an ending, just a place where you leave the story." Eventually the older generation leaves the story in the hands of younger generations. Life goes on, and getting older teaches you to enjoy each moment more and more. Reaching out and grabbing what you want now rather than later is the overarching lesson to be learned here. These people are aware they haven't got the time to miss opportunities anymore. If only we can keep this lesson in mind now rather than later.