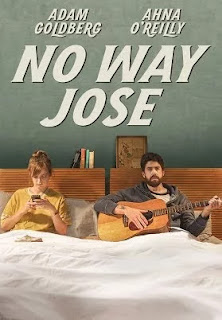 There are many coming of age movies, "No Way Jose" chooses instead to be a "coming of middle age" film. Or at least that's the tagline for actor/writer/director Adam Goldberg's latest film. It follows Jose during the bizarre, meandering days that follow the breakup with his fiance.

This breakup happens fairly early on in the film. His fiance Dusty (Ahna O'Reilly) and he live together in her home, because he's a struggling indie rocker who is lucky to get a gig at his friend's children's birthday parties. She doesn't judge him for his failure however, and neither pressure each other on money related issues. While Jose seems to have a young person's mindset, he seems to have come to terms with the fact that he's coming up on 40 and has yet to hit it big with his band. However, physically his body is starting to feel his middle age. He suffers from chronic neck pain forcing him to take pain medication, which adds to the hilarity when he's trying to have a serious conversation with Dusty.

While they aren't married yet, she's accepted his unofficial proposal (the ring is supposedly forthcoming), and to a certain extent they act like an old married couple. Later that evening they discuss plans for his upcoming 40th birthday, and their eventual honeymoon until she checks her email on her phone to find a message about the local school PTA. This seems all too odd to Jose considering they aren't married yet, but she's already thinking about kids and what school they'll go to. The email links her to an app that locates sex offenders. This leads to Jose's strange background. The app zero's in on their home and shows a photo of Jose. When she questions him about it, he explains that he was 18 years old and had formed a relationship with the 17 year old daughter of a sheriff who wrongfully assumed he had stolen her virginity. One thing led to another and now he's on the sex offender registry. Dusty doesn't know whether to be more bothered by this status or the fact that he never told her about it. Nevertheless both are problematic enough to warrant her kicking him out of the house. While it doesn't feel like an official breakup, it's also a necessary break for the two to find clarity.

In the meantime Jose stays with his best friend Gabe (Eric Siegel) and his wife Kate (Anna Belknap), who have two small children. Gabe is the picture of where Jose's life is heading. His wife asked him to leave the band behind to focus on family life and picking a job that pays more money. The rest of the film balances its time between this middle aged home life that weighs on Gabe and Jose's struggle to deal with the break from Dusty.

There's a number of flashbacks triggered by Jose's memories of her, such as when he met her, and some intimate moments they spent together. They show a happy couple, yet it only serves to make us wish they'd had more scenes together. These flashbacks are few and far between, and the rest of the film seems to get lost meandering through Jose's bizarre interactions with acquaintances, friends, family and everything in between rather than making us care about their relationship or building to a reunion between them.

To Goldberg's credit, the writing is quite clever at times and yet that's what makes the bizarre middle portion of the film so dissatisfying. The at times hilarious, fast paced, naturalistic dialogue is in service of a script that seems to have no direction. The film is very clearly at its best whenever Jose and Dusty are together on screen, yet their scenes make up a very small portion of the film. Its slow meandering pace is much like its main character who doesn't seem to have a clear destination in mind, and as a result the film tediously drags on heading nowhere in particular.

The aforementioned tagline, that assures us this is a story of middle age, seems to refer only to Jose's friend Gabe and his wife dealing with their kids and coming to terms with the fact that having kids restricts their personal lives more and more over time. Jose, on the other hand, doesn't grapple with having his own kids, and manages to keep a young mindset throughout. Yet the only real thing holding the film together is its broken love story, but the film gets so distracted by its other subplots that Jose's story starts to feel as much a subplot as anything else going on. We keep waiting for it to find some sort of purpose, but it never gets there. There's no change in character and no lessons learned. When Jose finally does get back in touch with Dusty there's a bit of a sigh of relief simply because we realize it signals the end of the film. It's rare that a film only around an hour and a half can feel so exhausting.

While I haven't seen his other directorial efforts, I do like Adam Goldberg as an actor, but this is a film that I'd have a hard time recommending to anyone. There's very little that's likable about it. While I certainly hope he keeps making films, I can only hope his future efforts feel less disjointed than this one.