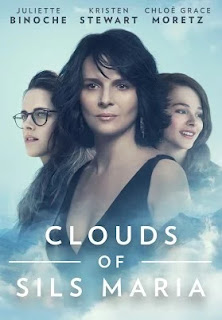 For many the main draw for this film may be the famous faces involved. For fewer, the filmmaker Olivier Assayas. No matter where you fall, the reason many smaller films gain wide success is thanks to their famous faces. Kristen Stewart is an actress that was rocketed to stardom thanks to the teen phenomenon "Twilight." What rising starlets are then allowed to do is branch out to smaller more personal films driven by talented directors. These directors may or may not have wide appeal, but they're sure to gain a wider audience when these young famous faces sign on to appear in their films. These projects also keep older famous faces working, but the cycle of life pushes them into support roles made to make the young ones look good.

"Clouds of Sils Maria" plays out this story, but from the perspective of one of the older famous faces played brilliantly by Juliette Binoche. The casting choices here seem to perfectly compliment the story, such as it is. That is not to say that Juliette Binoche has lost any of her luster, nevertheless she is age appropriate for such a role.

There is, also, a running commentary on Hollywood superhero films versus smaller more dramatic works. Maria (Juliet Binoche) clearly doesn't respect the big budget blockbusters that she formerly worked in, and now watches other rising stars participate in. Jo-Ann Ellis (Chloë Grace Moretz) is the young rising starlet known for her big budget superhero flicks. She's a reflection of the Hollywood wayward youth's of today's generation. When she isn't gracing the big screen, she's getting herself into legal trouble and mouthing off during interviews. Later scenes have her selfishly putting herself before everyone else, especially Maria during the production of their play.

The play is about 40 year old Helena, and her relationship with a young 20-something lover named Sigrid. When Maria was young she had played Sigrid, in the original production of the story. However, now a sequel from the same writer is being produced and in some sort of poetic justice Maria is asked to take on the role of Helena.

At first she doesn't want to accept. It's a character she doesn't respect, and worse yet fears to see too much of herself in. To properly play a role an actor has to become that character, placing themselves in the skin of that person. Helena is far more defeated by her own age than Maria wants to be, even if she's just acting. To put herself in that role is to accept that she's no longer the young star, she's the aging actress relegated to support roles.

Her assistant, Valentine (Kristen Stewart), however convinces her to do it, and pushes her to continue the whole way. As they rehearse scenes together they go in and out of the dialogue of the scene adding their own personal opinions of the characters and the dialogue. After a while it's hard to distinguish between what's really them and what's the characters they're playing. Just as Maria was afraid to become too much like Helena, her relationship with Valentine starts to reflect that of the characters in the play. It's a beautiful intertwining of reality and fiction. The two spend all their time together, and while they respect each other, they don't seem to agree on art or those who produce it.

There are many things at play deep in the subtext of this drama by renowned French filmmaker Olivier Assayas. Aside from the aforementioned commentary on Hollywood's blockbusters and wayward young actors, there's the struggle that comes with aging. We don't feel younger, but we have to accept that we are. The more humbling thing about aging for Maria is having to accept a new role in her line of work that no longer wants her to be the star. She exists to make the young stars look good.

Assayas also seems intent to point out the selfishness inherent in today's young Hollywood stars. We see it in one particular scene where Maria asks Jo-Ann to wait just for a moment before exiting the stage, to allow Helena a moment to capture the audience's attention. Jo-Ann outright refuses. It's a moment Maria allowed Helena to have while playing Sigrid when she were younger.

The beautiful locales add to the visual element here. The cinematography doesn't intend to draw attention to itself, but the scenery, nevertheless, makes for a beautiful film to look at. The film is about actresses working on scenes, stepping in and out of character. As such it requires good performances, and performances within performances, and none are better than Juliette Binoche. What many film lovers have wondered for years was whether or not Kristen Stewart was a "real" actress or not. While you might point to a number of her other films as evidence, "Clouds of Sils Maria" will be the evidence that she can indeed act at a high level. She shows a maturity, and screen presence that simply wasn't there in some of her previous films.

Before she's accepted the role of Helena, Maria complained that the play feels phony, but it's her hope that it isn't the way her life is headed. Valentine describes theater as an interpretation of life that can be truer than real life sometimes. The story here is theater and real life becoming one with each other. Age is much like the clouds snaking their way inevitably through the mountains obscuring the once beautiful vistas.