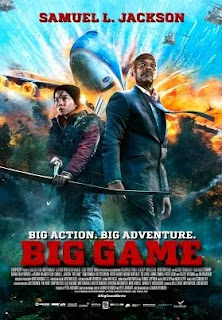 One of the things that made Helander's 2010 oddball film "Rare Exports: A Christmas Tale," so enjoyable was its ever so slight camp. It was a movie whose characters were serious, but the filmmakers were aware of the ridiculous nature of the story they were telling. It takes a deft hand to craft a story about reindeer hunters being attacked by hordes of naked, crazed, monstrous Santa Claus men, and make that story fun and engaging.

Helander now brings us another film whose high concept premise and execution is a tad over the top, but far less fantastical. While both "Big Game" and "Rare Exports" seem like films that could have been Syfy channel originals for their strange concepts and their lower budget special effects, but no one at Syfy has the skill of Helander, nor the star power of "Big Game." He has a way of making these "knock off blockbusters" as big and entertaining as their Hollywood counterparts (and even better in some cases).

In "Big Game" Helander presents a story in which a young Finnish hunter finds and befriends the President of the United States after Air Force One is shot down. The two form an unlikely bond as they're forced to rely on each other when the terrorists that shot down the plane chase them through the mountain wilderness.

The film begins with Oskari (Onni Tommila) an aspiring hunter and adventurer. He comes from a long line of famous hunters, and hopes to one day see his name honored among the others. More than that, he hopes to not let his father's high expectations down. As a customary rite of passage, on his 13th birthday he is set loose in the mountainous wilderness of Finland with only a bow and arrow to hunt his big game. Oskari is both inspired and intimidated by stories of past hunts including his father's own legend in which he killed a mighty bear with a bow and arrow. The problem for Oskari is his lack of confidence. The elder members of their hunter group don't seem to believe in him, and it has clearly caused some reservation on his part. These reservations are quite understandable when Oskari holds up the bow, draws back the string with all his might, and let's loose his arrow, only to realize he hasn't got the strength to pull back far enough to make his arrow deadly.

Samuel L. Jackson plays US President William Monroe (who I'll refer to as Monroe for the rest of this) flying in Air Force One until it's shot down in the same mountainous wilderness Oskari had set out in. In fact, the plane is nearly brought down right on top of him. However, before the plane is struck by rockets, Monroe is placed in the escape pod and jettisoned to safety on the ground. It's by this time that it's abundantly clear that the terrorists had inside help from rogue secret service agent Morris (Ray Stevenson). After parachuting the ground, Morris meets up with his terrorist cohorts to search for the President's pod.

Meanwhile, long before they can reach it, Oskari happens upon the pod. From the little window, a finger draws the 4 digit code to open the door, and Monroe emerges to find a boy Oskari in his peculiar getup. As they become reluctant partners there's a humbling Monroe is forced to go through. Upon meeting Oskari, he's taken aback that the boy doesn't recognize him, and he even tries to claim the boy's four wheeler as property of the United States. However, Oskari refuses to tell Monroe how it works. The President is completely out of his element, lost in a vast wilderness, with a boy obsessed with the big hunt, a subject he knows nothing about. It's Oskari's wilderness, so it'll be his rules.

Meanwhile back at the emergency command center, we're introduced to former CIA agent Fred Herbert (Jim Broadbent), who now serves as head of Langley's Terrorist Intel Unit. He's there to advise the Vice President (Victor Garber) and his staff on how to proceed in the effort to relocate the President and help determine who was behind the attack. Herbert immediately understands the situation as it is, and they're able to tap into satellite video feed that allows them to see everything, yet they still can't seem to get their Navy Seals to the area. They find that the man behind the attack is a known psychopath with no religious or political affiliation or agenda. Worse yet he and the secret service agent don't seem to be the only ones behind the attack, but just who else is involved and why is a mystery I won't spoil.

The more interesting aspects of the film are the culture clash between the young Finnish hunter and the aging President Monroe, and Oskari's personal coming of age journey. However, both feel like they take a back seat once the action blockbuster moments begin. The runtime is on the lighter side, and as such, it's a shame that these elements weren't explored further. Oskari's hunt becomes less about survival against the wilderness and bagging the head of a wild beast, and more one of survival against terrorists and saving the head of America. Best yet, it's all shot against beautiful mountainous locations. However, this makes one of Helander's biggest oversights. It's a major missed opportunity to have allowed Oskari to use his knowledge of the wilderness and budding hunting skills against the terror group. Oskari's story simply lacks that satisfying revelation, and the character of Monroe is reliant solely on Samuel L. Jackson to be Samuel L. Jackson. He's not given any real backstory or context to make him interesting.

As an over-the-top action film, there are certainly a couple of eye roll worthy moments, yet they're fewer and further between than in most action blockbusters. The budgetary constraints likely kept the film from being wall to wall action, yet the film is better of for that. Helander's aspirations for the film make up for some of the film's shortcomings. Like Oskari's young hunter, "Big Game" is the little guy from Finland standing tall in the midst of western big budget blockbusters. It's far from perfect, but few are the blockbusters that are. Furthermore, we don't expect perfection, we expect an entertaining film that has some fun and makes some bold choices. "Big Game" is as good an example of this as any. Just don't expect deep characters.