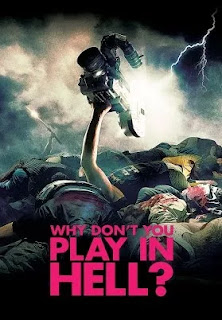 Sion Sono is one of the great directors of the world. With each of his films he aspires to make metaphors for the state of things. They're well thought out, and at times purposefully over-the-top entertainment. The target in his latest action/comedy is the entertainment industry itself.

A young group of aspiring filmmakers begin the film running around shooting whatever interesting thing pops up. Their ring leader and director Hirata (played later by Hiroki Hasegawa) has an uncompromisingly positive attitude that proves to be infectious to everyone around him, including his two camera operators, one who specializes in hand-held camera operation and the other who prefers to work with a dolly. What they lack in funding and professional film gear, they make up for in sheer enthusiastic will. Hirata gets the crew to film a local youth gang fight, but when the gangs get angry at them for filming, Hirata charms his way to their good graces and, in a clever bit of foreshadowing, ends up directing the fight on his terms.

At the same time, elsewhere in the same city, two warring yakuza clans trade attacks back and forth. The Kitagawa clan sends a group to kill Mr. Muto (Jun Kunimura), the head of clan Muto, but he isn't at home. Instead his wife fights back against the intruders killing all but one of them in a mercilessly gruesome manner. Yet the fact that she's placed in jail for the killings (whether they're considered self defense or not is debatable), prompts TV companies to pull their daughter's adorable toothbrush commercial, which features a cute little catchy tune that becomes a recurring gag throughout the film.

Flash foreward 10 years, and the sole survivor of Mrs. Muto's "self-defense" attack has taken over the Kitagawa clan. He's Ikegami (Shin'ichi Tsutsumi), perhaps the most bizarre character here, and his take over included a move to an old Japanese style castle, and a strict dress code where the only approved wardrobe is a kimono. They raid Muto's clan headquarters, but fail to find Muto himself again, because he'd gone to visit his wife in jail.

She's due to be released in the next few days, and can't wait to see their daughter Mitsuko's feature film debut. However, Muto finds out Mitsuko (Fumi Nikaidô) had lost her part in the film. The only thing for him to do, to keep from disappointing his wife's one desire upon being released, is to make their own film with Mitsuko in the staring role. And just to kill two birds with one stone, they'll film their retaliation raid on Ikegami's clan for their grand finale.

As you might expect, eventually the aspiring filmmakers from before get roped into making the film with the yakuzas. What follows is a hilariously grotesque and visually unique sequence that blends reality and fantasy to the point where we can't be sure what's what. In fact, there's a scene where the battle takes place in their minds as they plan out the shoot. Ikegami sees the film crew, and the two clans clashing, he realizes his men are tense and frightened, whereas Muto clan and the film crew seem to be living in a fantasy world, completely oblivious to danger. He remarks that reality will lose to fantasy. It's Sono's clever way of telling us what to expect, as both clans agree to live in this oddball fantasy world for the shooting of the film.

It's an over-the-top piece of absurd fun. Sono's visuals are beautifully stylistic, and original, particularly when one character accidentally spills a box of cocaine on his face during the battle and things switch to his drugged perspective. Sono's grand finale is hilariously, even shockingly grotesque, yet that becomes part of the problem as the film begins to slowly unravel while discarding principal characters. Yet that seems to be part of his purpose. It's a Tarantino-esque anti-Tarantino film. The absurdity of the characters and the world they inhabit, let alone its commentary on the state of entertainment and the makers of that entertainment, are Sion Sono's specialty.

We exist as the Koji character, a poor soul trapped in the middle of yakuzas and pulp filmmakers, forcibly subjected to their whims, and sentences to the worst fate of all. Perhaps most concerning is Sono's vision for what both sides deserve, whether or not we've come to like these characters. Nevertheless Sono is a uinique filmmaker, and this one is one of the most unique films I've seen in some time.